Today we don our reporter’s fedora, sit at our typewriter… and pursue a question truly scandalous.

We will be denounced for fanning “conspiracy theories.” Social media will excommunicate us for hawking “fake news.”

We expect fully to be tried for sedition… and packed off to the gallows for offending God and king.

But we will take the consequences as we must.

For we are hot to expose an illegal Federal Reserve manipulation of the stock market.

Today we haul forth forbidden evidence.

“But wait,” you say. “Isn’t it common knowledge that the Fed manipulates the stock market through interest rates and tricks like quantitative easing?”

Yet these are indirect influences, actions at distances, nudges at one remove.

It is as if the Federal Reserve has the stock market by the scruff of the neck.

And might it explain how the market came shooting from the depths late Friday… when all was in freefall?

The answer — the possible answer, in fairness — anon.

Powell Rides to the Rescue

This morning we noted the Dow Jones was 250 points in red. Not 10 minutes later we glanced again — only to learn it was suddenly 300 points in green.

But why? Here is the answer:

Declared Napoleon on his white horse, bloody sword in hand:

The magnitude and persistence of the overall effect on the U.S. economy remain highly uncertain and the situation remains a fluid one. Against this background, the committee judged that the risks to the U.S. outlook have changed materially. In response, we have eased the stance of monetary policy to provide some more support to the economy.

Why the Market Retreated

Stocks were in swift retreat shortly thereafter, pulling all the way back to negative territory.

“Where are they going?” he must have shouted inwardly. “Didn’t I just give them what they wanted?

But that is precisely why stocks likely fled the field of battle, Mr. Chairman. Your move suggests panic.

It tells them this coronavirus is a genuine menace, a true fee-fi-fo-fum, something really to watch.

The Dow Jones ended up retreating further still. It shed another 786 points on the day.

Meantime, the 10-year Treasury yield dropped beneath 1% today as the stampede to safety continued.

Not once in history has the 10-year slipped below 1% — not once.

And gold made a bid to reclaim safe haven status today, gaining a thumping $41.70.

But should the rout deepen…

Do not be surprised to see stocks rise unexpectedly under invisible influence — as if by conjury.

And so we return to our central questions:

Does the Federal Reserve directly intervene in the stock market?

That is, has it become its own Plunge Protection Team?

And does any evidence exist for it?

Graham Summers is senior market strategist at Phoenix Capital Research. And his researches have shoveled up some odd and exotic findings:

For years now, I’ve noted that anytime stocks began to break down, “someone” has suddenly intervened to stop the market from cratering…

[And] a year ago, I noticed that the market was behaving in very strange ways.

The markets would open sharply DOWN. Seeing this, I would begin buying puts (options trades that profit when something falls) on various securities, particularly those that had been experiencing pronounced weakness the day before.

Then, suddenly, and without any warning, ALL of those securities would suddenly ERUPT higher.

What made these moves even more bizarre were that they were happening at roughly the same time of day (9:50–10:00 a.m. EST). And as if that wasn’t odd enough, these violent rallies were occurring on almost NO volume, meaning that real investors were not driving them.

And this was happening almost every week.

I’m always looking for new ways to make BIG MONEY from the markets. So suffice to say, this discovery REALLY got my attention.

What followed was a labyrinthine journey into the guts of the financial system. It took several months, but after countless hours of research, I came to a startling conclusion.

Which was what, Mr. Summers?

I 100% believe the Fed is actively intervening in the stock market.

I don’t mean indirect interventions via rate cuts or quantitative easing (QE) programs… I mean that I believe the Fed is LITERALLY buying stocks directly to stop the stock market from falling.

But That’s Not Legal

It is true, some central banks such as the Swiss National Bank and the Bank of Japan are legally authorized to purchase stocks. Both take advantage in full.

But the Federal Reserve Act — Section 14 — grants our own central bank no similar authority.

It may purchase Treasury debt and mortgage-backed securities, yes. But not stocks.

You are alleging, Mr. Summers, that the Federal Reserve is acting contrary to the laws of the United States.

What evidence have you?

Stocks opened in a sea of red based on increased tensions between the U.S. and Iran. Then, suddenly, stocks went absolutely vertical around 10 a.m.: 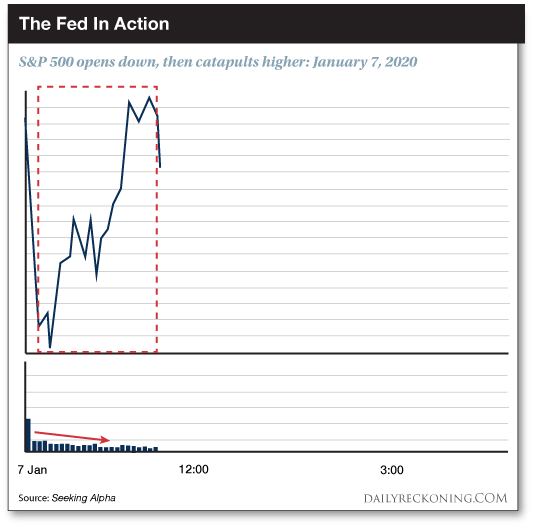 Interesting. But certainly you have more evidence than that?

Yes, we are told. Mr. Summers next directs us to last Friday, when markets were plunging once again.

During the previous five sessions, Microsoft, Apple, Alphabet (Google) and Amazon were tumbling faster than the overall S&P.

But early afternoon Friday, Apple and Microsoft mysteriously pulled up… and halted the S&P’s sell-off.

Microsoft had warned on Wednesday that manufacturing kinks in China would kink its bottom line.

Apple was similarly upset by the coronavirus. 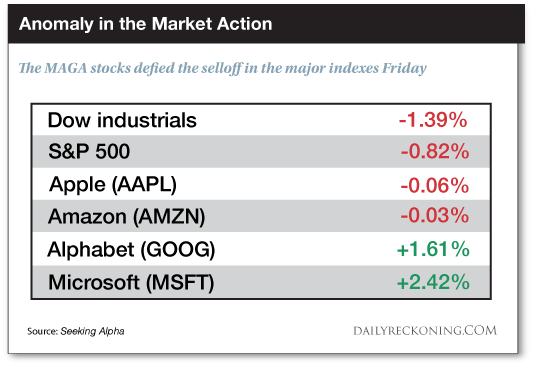 Again we ask… what prompted the about-face?

Both the Dow Jones and S&P closed the day in red. But given their outsized weighting, these particular stocks halted the rout.

And both indexes ended Friday far higher than they otherwise would have.

Summers believes the Federal Reserve purchases these specific wagon-pullers to haul the freight along.

The Role of “Passive Investing”

The strategy relates directly to the “passive investing” we tackled yesterday.

The Financial Times recently reported that according to data from JPMorgan and Lucerne Capital, only 10% of stock market volume comes from actual fundamental stock investors.

The other 90% of all market trading today is generated by passive funds/index derivatives. Meaning 90% of trading comes from automated computer trading programs that buy stocks passively. These programs buy individual stocks or entire stock indexes without thinking.

Because of this, the Fed knows it only needs a significant percentage of stocks to ratchet higher to get the entire market to rally.

Those stocks, again, are Microsoft, Apple, Alphabet and Amazon.

Please, continue. Do you have additional evidence of this ongoing — and illegal — operation?

Fed interventions occur at specific times of day. Real investors don’t arbitrarily place large orders at particular times of the day. [But] I’ve noticed time and again that these kinds of large indiscriminate moves occur at 10:00 a.m. on days when the market opens in the red. [Also]…

Trading volume falls during Fed interventions. Volume fell as the market ripped higher, indicating that there were few real buyers in the marketplace. If this had been a real market move based on real buyers coming into the markets, the trading volume would have stayed strong or only declined slightly.

Who else could this be but the Fed?

We have no answer. You present a compelling — dare we say, convincing — case.

We demand a Congressional investigation at once. The alleged conduct is again, illegal.

This is a nation of laws after all.

And who, besides the FBI, CIA, NSA, IRS  — and Department of Justice — is above the law?