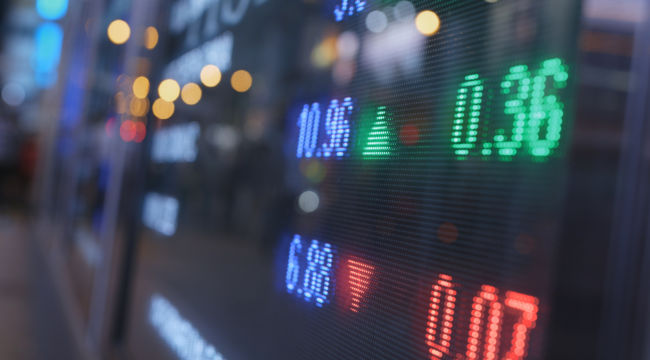 A crucial theme from last year is continuing into this year — stock buybacks. Last year was a banner year for companies buying back their own shares. A month into 2019, it appears that Wall Street is set to continue that trend.

Last year, U.S. companies announced a whopping $1.1 trillion worth of buyback plans. Armed with extra cash from favorable corporate tax policy enacted in 2017, they enthusiastically bought back their own shares.

But as of mid-December, only about $800 billion of those buybacks had actually occurred. That means there could be another $300 billion of the total 2018 target still waiting to hit the market.

In fact, Wall Street is already gearing up for another banner buyback year. In a recent report, J.P. Morgan strategist Dubravko Lakos-Bujas wrote, “It’s expected that S&P 500 companies will execute some $800 billion in buybacks… in 2019.”

The Wall Street strategist also explained that the quality of 2018 buybacks were high. He revealed that companies were using their cash, rather than borrowed money, to fund buybacks. Using cash toward buybacks is expensive less than using debt.

But why did the wave of buybacks slow down late last year?

The first reason is that companies involved had already purchased stock at a very rapid rate through last September. That was one major reason we saw the market peak around that time, and in fact, hit new records.

The second was that despite trade war fears and uncertainty, companies felt confident enough to go ahead with their buybacks initially. That’s why we saw market players largely shrug off warning signs through the first three quarters of 2018.

But sentiment shifted dramatically during the last quarter of the year, culminating in essentially a bear market by late December. And more reports around the world began to point to slowing economic growth ahead.

A key factor cited for this slowdown was the impact of prolonged trade wars, which could curb real economic activity and create more uncertainty. In turn, growing volatility would keep businesses from planning expansions, or using the cash originally set aside for buybacks.

A third reason for the drop off in buybacks late last year was a record amount of public corporate and consumer debt that had to be repaid or at least serviced regularly. This overhang of debt was weighing on growth expectations. That debt load would become even more expensive if the Fed kept up with its forecasted rate hike activity in December and throughout 2019.

Some analysts even warned that the Fed might go ahead with another four rate hikes this year. That triggered fears on Wall Street that the central bank stimulus game could truly be over.

The reason for the concern is simple: The higher the interest rates, the more expensive it is to borrow and repay existing debt. For more highly leveraged corporations and emerging market countries, this would be an even greater threat. A higher dollar, resulting from more Fed tightening, could cause other currencies to depreciate against the dollar. That would make it harder to repay debt taken out in dollars.

Finally, there was heightened tension in the financial markets due to political uncertainty. With U.S. election results ensuring added battles between Congress (with Democrats taking the majority in the House of Representatives) and the White House, doubt set in over the functionality of the U.S. government going forward.

Those reservations were justified. The government shutdown that kicked off 2019 had a lot to do with shifts in the political balance in Washington.

Geopolitical tensions also rose at the end of 2018, including Brexit in the United Kingdom, street revolts in France, potential recession fears in Italy and growing unrest in South America.

All these factors combined ensured that markets were extremely volatile during the last quarter of 2018, and why it was the worst one for the markets since the Great Depression. It was not conducive to buybacks. Buybacks are supposed to raise the stock price. But strong market headwinds could have largely canceled their effects.

The prudent approach for companies facing such a negative environment was to wait out the problems until the new year.

But Jerome Powell subsequently gave into Wall Street and took a much more dovish position on both rate hikes and balance sheet reductions. That means the coast is clear again to resume the buybacks.

Back in December, some major players announced plans for 2019 buybacks. These include Boeing, which announced an $18 billion repurchase program. It also includes tech giant Facebook, which plans to buy back $9 billion of its own shares, in addition to an existing $15 billion share repurchase program started in 2017.

These plans are now much more likely to go forward.

They could well announce them for 2019. Companies that did announce big buybacks last year, like Apple, could also engage in more, adding a potential $100 billion share repurchases this year to match 2018.

Another indicator for a sizeable 2019 buyback wave is that stock prices are lower now than they were going into the fourth quarter of 2018. That means companies can buy back their shares at cheaper prices. They could buy at a discount, in other words, or at least what they hope will be a discount.

By mid-January, of the S&P 500 companies that reported their fourth-quarter earnings, nearly 70% of them have exceeded Wall Street’s profit expectations. It’s a favorable environment for buybacks.

Yet, it may still take some time for companies to move forward with this year’s buybacks. That’s because we are still in the “black-out” period that the Securities and Exchange Commission (SEC) has created.

The period covers the time just before and after companies post earnings results. The sell-off in October coincided with the third quarter earnings season’s “blackout period.” The combination of negative environmental factors plus fewer buybacks drove markets even lower.

Now, once earnings season and the current blackout period is over, Wall Street will be unleashed to buy large blocks of stock for their major corporate clients.

If the Federal Reserve truly holds back on its former interest rate and quantitative tightening plans, as it seems likely to do, expect central bank stimulus to continue to fuel markets.

Of course, buybacks do not come without negative implications. That’s because companies are not using their cash for expansion or to pay workers more, which would generate more buying power in the overall economy. But in the short run at least, they tend to raise the stock price.

Even if Wall Street comes up against headwinds of volatility, slowing economic growth, political strife and trade wars, they can now expect the Fed and other central banks to have their backs.

Buybacks could become a very powerful force once again this year, and keep the ball rolling a while longer.