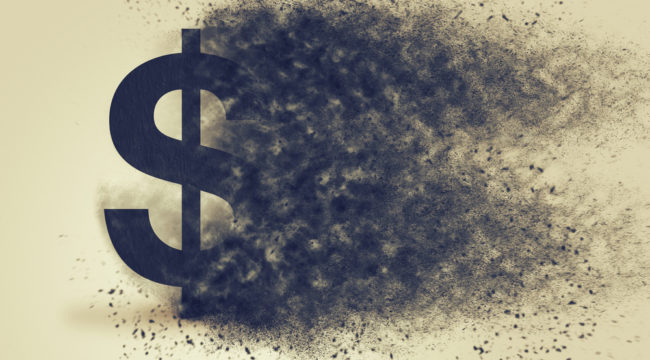 The Eternal Plea for Inflation

We learned in yesterday’s Washington Post that the Federal Reserve “needs to learn to love inflation.”

Economics writer Matt O’Brien argues the Fed’s 2% inflation target is far too modest… that Janet Yellen lacks something in the way of vocational ambition.

This fellow believes Ms. Yellen should set her cap much higher — 4% inflation:

The higher inflation is, the higher interest rates have to be to control it — and the more room there is to cut them when the economy gets into trouble. So if a 2% target doesn’t get rates high enough to keep them away from zero, then maybe a 4% one will…

So if the Fed wants to get back to a world where interest rates don’t spend a lot of time at zero, it will need to not only try to get more inflation, but also be comfortable with the inflation it does get.

“There are worse things than 2% inflation,” concludes this geyser of immemorial wisdom.

Quite true. There are.

Washington Post opinion writers, for one. Disciples of Lord Keynes for another.

Combine the two in one person and the holy angels shriek with horror.

Inflation is the eternal plea of the crank… of the pitchman… of the madman who hears voices in the air.

Inflation brings the miracle of Matthew 14 to life, they cry… multiplying bread and fish to feed the masses.

Marx famously declared that religion is the opium of the people.

It’s certainly been the opium of governments since the 1930s.

The modern state rises on foundations of debt. The United States presently rests atop some $20 trillion of it.

Inflation lightens those chains of debt. It makes Uncle Sam a grafter… a swindler… a cheat.

He borrows a dollar and under inflation he pays it back in cents.

The creditor who loaned it never escapes with a whole skin.

The business is dishonest. But it is the business.

And that partly explains the Fed’s monomaniacal efforts to let inflation off its leash. It makes debt bearable.

For years the Fed’s been unable to generate the inflation it wants. Even now it can’t swing its magical 2%.

But at Wednesday’s post-rate hike press conference, Janet Yellen indicated she might be willing to heed this O’Brien fellow’s advice. If 2% isn’t working, maybe somehow gunning for 4% will:

“We will be reconsidering at some future time,” bleated Yellen about increasing their inflation target. It will be “one of the most important questions facing monetary policy around the world.”

But the economic machinery doesn’t submit so easily to the hammers and wrenches of the central banker.

Our fear is that one day the inflation they’ve failed to generate will suddenly pour forth in dreadful floods. And our precious dollar will wash away.

On the bright side, at least a good chunk of America’s $20 trillion debt will wash away with it…