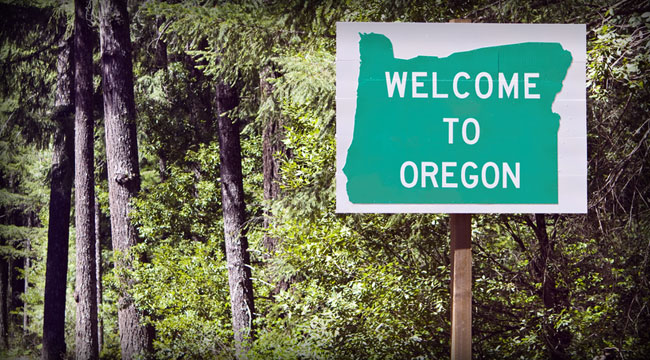 Epicenter of a Bursting Bubble

“Josephine County is broke,” wrote the commenter at Huffington Post. “Armed citizen volunteers have taken over most patrol duties against the wishes of Sheriff Gilbertson.”

Washington, D.C., is flush with new tax revenue… and Wall Street is riding high with the big stock indexes near record highs. Meanwhile, in places far from the centers of power, we’re seeing one of our forecasts play out. Now nearly two years old, we said the “mother of all financial bubbles” would make itself felt first on the local level.

Josephine County, Ore. — population 83,000 — sits on the California state line. As long ago as 2007, the county government ran out of money for the libraries and shut them down; they’ve since reopened under the auspices of a nonprofit group.

“I don’t have anybody to send out there,” said the 911 dispatcher to the woman who was about to be raped in her own home. “Can you ask him to go away?”

It happened in Josephine County last August. The story “went viral” only last week. The intruder — the woman’s abusive ex-boyfriend — eventually broke in, attacked and fled. Then police swung into action and arrested him.

“If you don’t pay the bill, you don’t get the service,” said Josephine County Sheriff Gil Gilbertson. Budget cuts, he says, make it impossible to respond to emergency calls on evenings and weekends.

“What’s left of the Josephine County Sheriff’s Dept. is basically only available 9-5,” concurs the HuffPo commenter.

“You may want to consider relocating to an area with adequate law enforcement services,” the sheriff added helpfully.

The Sheriff’s office does, however, have the resources to carry out marijuana raids.

HuffPo’s Radley Balko put Google through its paces and came up with accounts of no less than four raids — all of them taking place since the woman was attacked in August.

Blame it on Washington’s perverse incentives, spotlighted in a 2010 Wall Street Journal article featuring Tom Bosenko, the sheriff two counties south in Shasta County, Calif. “If he steps up his pursuit of marijuana growers,” the paper reported, “his department is eligible for roughly half a million dollars a year in federal anti-drug funding.”

“The problem here,” writes Balko of the current case, “isn’t that there are no resources available for law enforcement officers to respond to 911 calls in Josephine County. It’s that federal, state and local officials have decided that preventing Josephine County residents from getting high is more important than preventing them from getting raped.”

Turns out that even back in better days, it was federal money keeping Josephine County government afloat.

“Federal forests make up 60% of the land in many rural Oregon counties,” explains the Portland Oregonian. “Because federal land isn’t subject to property taxes, the federal government for decades shared timber sale revenue with the counties.

“But that money dried up as environmental restrictions, lawsuits, recession and market changes reduced logging on federal forests by 90% since 1989. The change cost counties millions.”

The situation is quickly moving from bad to worse.

And the state government might end up Bigfooting the county for having voted the “wrong” way. Gov. John Kitzhaber is imploring the Oregon legislature to grant him emergency powers. “The measure would authorize the governor to declare a public safety emergency for up to 18 months,” reports the Associated Press. His powers would include the imposition of a local income tax.

Wonder what the “armed citizen volunteers” would think about that.

Who knows? Before it’s all over, Oregon might lose its status as one of five states with no sales tax.