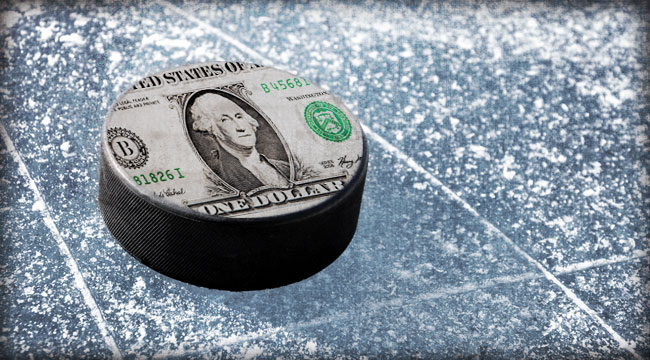 The financial world is plodding along like a drunken sailor avoiding debt collectors by keeping no cash in his wallet. It’s not the kind of calm that’s going to last or end well. But the storm will have to wait until after the Olympics.

What a game! We’ve never watched ice hockey closely before. But watching Russia and the U.S. play a contact sport is bound to be fun.

Just before the end of the third period, the Russian team scored to take the lead 3-2. But the goal was disallowed because the pin holding the goal had stretched, leaving the net imperfectly square. It had no impact on the quality of the shot, but the refs didn’t seem to care.

The game went to penalty shootout. The Americans scored the first shot, but missed the next two. The Russians missed their first two and then scored the third.

We think all this digital warfare is overhyped. Globalization has the upper hand.

Eventually Oshie got one up and the game was over.

The crowd didn’t like it. Russian President Vladimir Putin didn’t look happy. The referee who disallowed the Russian’s goal is unlikely to make it out of Russia alive.

The good news is that NSA leaker Edward Snowden received an extension to his Russian visa. At least we suspect he will shortly.

Snowden’s files continue to bring up embarrassing surprises. The German media is reporting that their intelligence community, banks and government were all subject to a digital attack out of China. But what is China doing attacking the Germans? And isn’t it odd that we find out about it from leaked U.S. intelligence files?

Of course, economic attacks are an age old strategy. But the digital age makes things far more interesting. America managed to get Iranian nuclear equipment to go haywire using a computer virus. That’s much cooler than the medieval technique of lobbing a dead cow over the city walls to try and get disease to spread and the city to surrender.

We think all this digital warfare is overhyped. Globalization has the upper hand. And in the end a serious digital attack is an act of war. The Cold War stayed cold for a reason.

Not that this means we’re off the hook. Governments are much better at screwing up their own economies than other countries’. The American virus which messed with Iran’s nuclear production also ended up infecting the networks of western oil producing companies.

But these aren’t the kind of shenanigans that will cause serious global problems. The next big crisis is going to be far more original.

The French multinational banking and financial services company, Societe Generale, staged an economic wargame which modeled an economic slowdown in China. The conclusion was that the U.S. dollar would rise, world economic growth would stumble and commodity producing nations would be hit hard.

Strangely enough, SocGen isn’t worried about the Chinese banking system and its systemic risk. Foreigners only have a small exposure to China. Just as the subprime housing crisis in the U.S. was just a small problem.

Daily Reckoning Australia editor Greg Canavan is worried about the Chinese banking system in particular. It’s out of control and fraying at the edges. The shadow banks are defaulting and struggling already.

But why does debt play such an important role in economic crises? The answer is that it’s the government’s number one economic tool. They see debt as a way of managing economic growth. By fiddling with the price of debt — interest rates — economists can manipulate GDP.

And apparently they can do it without fear or consequence. Over at the IMF, researchers have come up with an absolutely priceless piece of research proving it. We have to quote the abstract because it’s so beautifully ignorant of any sense of reality.

“Using a novel empirical approach and an extensive dataset developed by the Fiscal Affairs Department of the IMF, we find no evidence of any particular debt threshold above which medium-term growth prospects are dramatically compromised. Furthermore, we find the debt trajectory can be as important as the debt level in understanding future growth prospects, since countries with high but declining debt appear to grow equally as fast as countries with lower debt. Notwithstanding this, we find some evidence that higher debt is associated with a higher degree of output volatility.”

In other words, debt doesn’t matter. Borrow and binge away. Nothing will go wrong.

So back to the Olympics…for now.