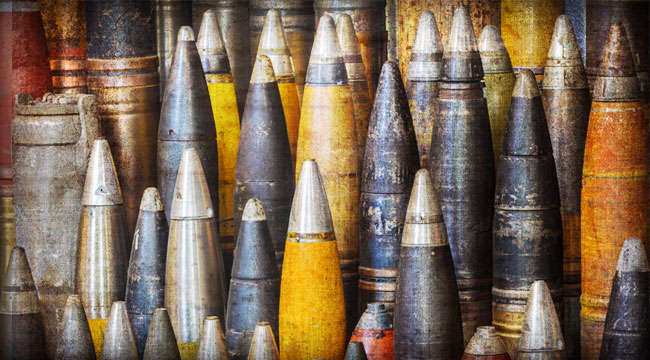 Downside: After the Returns Stop Diminishing

The downside for Nazi Germany began almost as soon as it started. The regime shifted national resources toward armaments as soon as the Enabling Act of March 1933 gave Hitler the power to rule by decree. More spending on the military left fewer resources for the consumer economy. As more and more men, steel and coal went into military output, nonmilitary output declined, bringing down standards of living. The real wealth of the German people began to fall almost immediately. At first, the decline was modest. Economists didn’t notice it. They focused instead on rapid industrial growth, falling unemployment and belching smokestacks. But the typical German had less to eat, less to spend and less to buy. In the final years of the Third Reich, his standard of living was in free fall.

Few people wake up in the morning and say to themselves: “What I really want is a tank.” Nor do they turn to their wives and say: “Honey, we’re out of ammunition.” Military spending is a state concern, not a private matter. Very few individuals want to use their time or money on weapons or defenses. Security spending is regarded as a necessary evil. It does not increase standards of living. But how much of it is necessary? A politician may say, “We’ll be better off if we increase military spending.” A general may advise that the nation will be “safer” if it launches a new weapons program. But how do they know?

Normally, we know what things are worth only by observation. We watch what people buy and what they do. If a man chooses to spend all his time collecting stamps, we presume he likes it. If he chooses to buy an old painting or a new motorcycle, we presume he wants them. We can look at how he spends his money to determine what he desires… and look at prices to see what he thinks they are worth. People use their time and money as they see fit. If a gallon of gas is priced at $4 — on the free market — then that is what it is worth. If a dozen eggs are priced at $2, we can say that a gallon of gas is worth two dozen eggs. We have no other reliable measure.

If people are 100% free to produce and to spend as they wish, we can presume they get 100% of what they want. Whether it is good or bad, we don’t know. All we know is that prices reflect the relative values that people give to things and that the economy fully expresses their wants and desires. This is, of course, a fantasy. Nowhere on Earth… at no time in history… did such an ideal economy exist. Everywhere, in every epoch, there were restrictions, laws, regulations, theft, subsidies, slavery and other distortions. Still, it is worth keeping in mind this IDEAL ECONOMY. Like an honest man or a virtuous woman, it gives us a standard against which to measure our shortcomings.

If this is true, it raises the deepest questions about economic policy. It suggests that there shouldn’t be any. Even the wings of an angel state, brushing against an ideal market economy, are bound to cause distortions. Every act of central planning is an interference with individuals’ plans. Every state-level policy decision interrupts thousands or millions of private ones. There is no way around it. Buyers and sellers express their preferences. We can see what things are worth. If, on the other hand, the price is set or suppressed or sustained by decree, the information content in the price disappears. We don’t know what people really want. We don’t know what things are worth. We can only guess. Would they buy so much gasoline if the price were higher? How much corn would people consume if the feds did not require us to put it in our gas tanks? How much would you pay for a hospital stay if the industry were not so heavily regulated? We don’t know.

Any attempt to fiddle with the system, dictate prices, favor one industry over another or change preferences in any way creates a distortion that reduces net satisfaction, aka what people want. Meddling distorts the results so that people end up getting less of what they really want… and more of what someone else wants them to have.

But wait a minute. Suppose you take money from rich people and spread it around? Now, instead of one rich person getting a lot of what he wanted, 10 or 20 not-so-rich people would be able to get more of what they wanted. Wouldn’t that increase net satisfaction? Doesn’t the rule of declining marginal utility decrease the rich man’s enjoyment while permitting the poor men to enjoy their pleasures more fully? Perhaps. But something always seems to go wrong on the road to improving others’ lives.

You can presume, for example, that the rich are not consuming all they have. Otherwise, they wouldn’t be rich. So you can also presume that what is taken from them has some role beyond satisfying their immediate whims and wants. In fact, it is the capital that is used to build businesses, create factories and endow universities and hospitals; these are the excess resources that are invested to create more consumer goods and services. Take away this capital and will the society be as rich? Will net satisfaction go up or down? Who knows? But it’s not something we have to worry about. No government in the world undertakes simply to redistribute money from rich to poor. Certainly not the Third Reich.

“The job of the Ministry of Economic Affairs is simply to set the national economic tasks; private industry has to fulfill them… Either German industry will grasp the new economic tasks, or else it will show itself incapable of surviving any longer in this modern age…”

In 1936, he also proposed a law providing the death sentence to anyone guilty of “economic sabotage,” that is, not going along with his plans. What he said… and what he wanted… was so good that it made sense, at least to him, to dismiss the parliament and override the wishes of his own constituents. He was merely doing what all central planners do — replacing what the people wanted with what he wanted, and replacing the whispers of the free market with the sound of his own voice.

As far as we know, God does not speak to public officials and tell them what would be best for the people. Instead, as far as we know, people who control government always use it in a sensible and obvious way — to get more of what they want and more of what they want others to have. And since they have the government’s police and military power to help them do it, unless they are saints and geniuses, the downside can be huge.

When people are allowed to spend their time and money as they wish, the system adapts readily to changes in preferences. A fellow wants a heavy coat in winter. In summer, he wants a bathing suit. Tastes change. Buying patterns evolve. Who really gives a damn? When a woman feels she has enough pairs of shoes… or a man feels he has drunk enough whiskey… they stop. There is no need to worry too much about the return on investment. It is their own money; they can squander it any way they want. People don’t necessarily get what they want. But at least they get what they deserve.

One of the underrated features of the free market is that it so readily separates fools from their money. In government, fools separate everyone else from their money. In private life, people often waste resources. But it is their own wealth they are wasting. And wasters quickly run out of money. Not so the feds. Given an opportunity, they can waste the output of a whole economy… and many decades of accumulated wealth.

In 1930, Germany was still recovering from the disaster of World War I. In terms of per capita GDP, it had only 50% of America’s prosperity and about 65% of Britain’s. Still, its factories were competitive. It had some of the world’s best scientists and engineers and the strongest major currency in Europe. It was already manufacturing world-class tractors, automobiles and airplanes. Left alone, it probably would have increased production, cut costs, raised salaries and gradually joined the U.S., Britain and France as one of the world’s most prosperous nations. Instead, Germany took a different route.

Bill Bonner,
for The Daily Reckoning