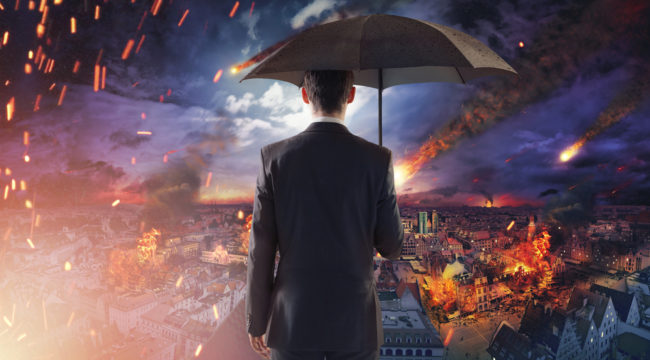 The Doomsday Clock: 2.5 Minutes to the End of the World

As I noted above, the Bulletin of the Atomic Scientists has recently moved the Doomsday Clock forward to “two and a half minutes to midnight.”

The Bulletin gave the following reasons for this latest, extraordinary increase in their estimate of world destruction:

North Korea conducted two more nuclear weapons tests, the second, in September, yielding about twice the explosive power of the first, in January. Pyongyang also relentlessly tested missiles, achieving a rate of about two launches per month in 2016. In his 2017 New Year’s statement, Kim Jong-un declared he would soon test a missile with an intercontinental range.

The UN Security Council passed new sanctions against North Korea in November 2016 in an effort to further limit the country’s access to cash, but there is no guarantee those sanctions will succeed where others have failed.

Meanwhile, Russia is building new silo-based missiles, the new Borei class of nuclear ballistic missile submarines, and new rail-mobile missiles as it revamps other intercontinental ballistic missiles. The United States forges ahead with plans to modernize each part of its triad (bombers, land-based missiles, and missile-carrying submarines), adding new capabilities, such as cruise missiles with increased ranges.

As it improves the survivability of its own nuclear forces, China is helping Pakistan build submarine platforms. And Pakistan and India continue to expand the number of weapons in and the sophistication of their nuclear arsenals.

The Bulletin contains further information about the decision to move the minute hand forward. This includes doubts about the Iran nuclear deal, threats by the new Trump administration, and disputes in Syria and Ukraine.

Why do these doom and gloom prognostications offer opportunities to investors?

The reason is that the disaster scenarios do not have to happen. History shows that responsible nations find ways to move back the hands of the Doomsday Clock.

The way to avoid reaching midnight is with more spending in defense and technology including research & development. That’s a huge opportunity for investors who back the right companies.

I’ve partnered with a former defense industry executive to develop a new project to focus exclusively on finding huge gains in the defense technology sector.

As defense spending takes off, there will be many profit opportunities for smart investors.

It was Ronald Reagan’s Strategic Defense Initiative, also known as “Star Wars,” that helped to force the collapse of the Soviet Union and win the Cold War.

History shows that robust defense spending does not make the world more dangerous — it makes the world safer by neutralizing emerging threats, and providing deterrence to keep nuclear war from happening in the first place.

It’s true that the world is quite dangerous today. But it is also true that President Trump’s ambitious defense spending plans have the potential to blunt the threats coming from Iran and North Korea, and to improve relations with Russia.

These Trump initiatives could cause the hands of the clock to be moved backwards to a more comfortable 5 minutes in the years ahead.

Right now, there’s no doubt that the greatest threat to world peace in general, and the U.S., in particular is coming from the Democratic People’s Republic of Korea, DPRK, commonly referred to as “North Korea.”

North Korea has made great strides in short-range and intermediate-range missiles, and is working toward an intercontinental ballistic missile (ICBM), that could reach Los Angeles and much of the rest of the United States from their territory.

North Korea has a store of plutonium and highly-enriched uranium (HEU) that can be converted into nuclear weapons. It has also made progress in the miniaturization and ruggedization of those weapons so they can be converted to warheads and placed on the missiles.

When these technologies are perfected and merged, North Korea will be able to kill one million residents of Los Angeles with the push of a button. This nightmare reality is probably just three years away.

Kim Jong-un has also threatened to reduce the United States “to ashes” with nuclear attacks.

The U.S. has taken none of this lying down. U.S. Secretary of State Rex Tillerson said that diplomatic efforts to contain North Korean ambitions over the course of the Clinton, Bush 43, and Obama administrations have failed, and the time for diplomacy is past.

Tillerson made it clear that the U.S. would engage in pre-emptive warfare with North Korea to stop their nuclear program if necessary. Tillerson also refused to rule out supplying nuclear weapons to U.S. allies including Japan and South Korea in order to deter North Korea on a regional basis.

Zhang Liangui, a professor of international strategic research at a major Chinese university, also believes the risk of a U.S. war with North Korea over its nuclear program has significantly increased:

“[North Korea] has already touched the red line of the U.S. and it seems that the U.S. does not have other choices. The possibility of military action is increasing.”

The most important point is that the North Korean threat to destroy Los Angeles will not be allowed to go forward.

This means that either war will occur or an effective means of neutralizing the threat will be developed in the next year or two at the most. No president can gamble Los Angeles on the intentions of a mad dictator like Kim Jong-un.

The second point is that the U.S. has confronted such threats in the past, not with warfare, but with technology. The U.S. invented multiple re-entry warheads (MIRV), and anti-ballistic missiles (ABM) in the 1970s to blunt the Soviet advantage in sheer throw-weight of missiles.

This lead to nuclear arms reductions treaties, which put the nuclear war genie back in the bottle. It was developments such as these that led to the fall of the Soviet Union and the resetting of the Doomsday Clock.

American’s best defense contractors are hard at work today on new technologies that can neutralize the North Korean threat. President Trump has promised the funding for these companies to get the job done.

These are huge multi-billion dollar, multi-year contracts that are currently classified and therefore are not fully-priced into stock valuations by Wall Street.

Such new technologies also lead to civilian applications that make the research and development even more valuable in the long-run.

Early investors in the companies pioneering these technologies could see enormous profits in the years to come.