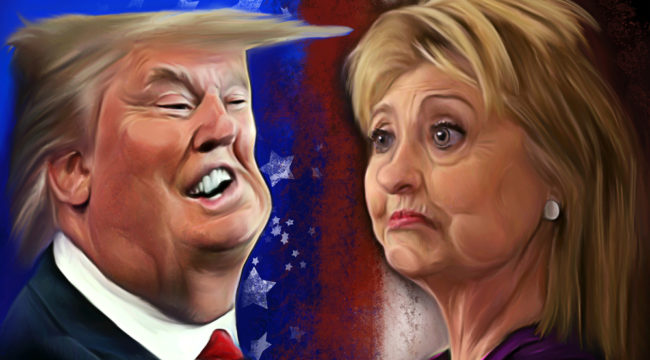 Don’t Listen to the Polls

Many news sites rely on a  “poll of polls,” where they take the average of ten or so different polls and run with that figure. It sounds accurate in theory. But there are reasons why that might not be an accurate indicator of this election.

The first reason is that the “poll of polls” is only as accurate as the underlying polls it’s comprised of. Every poll has a little bit of error, or noise. The theory is that if you aggregate 10 or so polls, the noise tends to get cancelled out.

So a poll biased towards Hillary will be cancelled by another poll favoring Trump, so you arrive at an accurate number. But if the underlying polls are skewed towards Hillary, which they are, the poll of polls is going to reflect that distortion.

The other reason not to trust many of these polls is because they contain a built-in lag. A poll of polls, particularly the popular Real Clear Politics tracking poll, relies on, as the term implies, tracking.

Tracking means they drag along three days of data, from today and the previous two days. But by definition, some of that data is two days old and may therefore be inaccurate by the time you see them. If nothing changes over that time frame, it might be accurate. But if one candidate is trending, the poll won’t necessarily reflect that. You’re going to be a day or two behind at election time.

And that’s happening now. The polls have been trending strongly in favor of Trump for the past four or five days, so a snapshot poll of polls is not going to reflect that trend or its full impact.

Are there any good polls you can trust? The best poll over the last three election cycles is one most people have never heard of. It’s the Investor’s Business Daily (IBD) poll. IBD is like The Wall Street Journal, only more boring if that’s possible. But they do highly accurate polls. Again, it’s been the most accurate poll for the past three elections.

The IBD poll comes out daily. And today it’s showing Trump by two points. As I said, this poll has a record of being extremely accurate, in contrast to some of the other leading polls like ABC or CBS, that show a solid Hillary lead.

The other problem with polls in general is that polls are only as good as the sample they’re based on. You can’t go out and ask 100 million people how they’re going to vote. But you can ask 1,000. So the question becomes, are those 1,000 people an accurate reflection of the overall electorate?

If it is, then you can get a reasonably accurate impression from those 1,000 people, plus or minus 3%. If it isn’t, the poll’s going to be distorted by whatever deficiencies are represented in the sample.

And the polls are telling us that they’re oversampling Democrats. That’s not a guess or conspiracy theory. If you read the footnotes on the methodology of these major polls, they tell you that.

Something else they also don’t tell you is what kind of Democrats they’re sampling. If polls skew towards African-American voters in the sample, you know they’re going to vote up to 95% for the Democratic candidate. That’s been a reliable voting pattern.

But if you include whites in the sample, there are going to be a number of whites who will vote for Trump. So including more African-Americans in the poll will skew the results more towards Hillary.

These are just some of the games pollsters play. And once you take such a poll and place it in the Real Clear Politics poll of polls, for example, it’s going to skew the outcome in favor of Hillary.

That’s why, with most of these polls, I take a point or two from Hillary and add a point or two for Trump. Which, incidentally, is what the IBD poll does. They’re not using the games I just described. It’s a more honest poll, so that’s why I think most polls are wrong.

There’s one other factor to consider today: exit polls. Exit polls sample voters as they’re leaving the voting booth who they pulled the lever for.

Organizations take that exit polling data over the course of the day. By about five o’clock in the afternoon they know who’s going to win the election, unless it’s too close to call. Then the polls close, starting around seven p.m. Eastern time, and then eight p.m. and nine p.m.

If the polls close at 7 p.m. and some commentator says at exactly 7:01, “CBS News calls Massachusetts for Hillary Clinton,” they’re not doing that because all the Massachusetts votes are counted. They’re doing it because they have the exit polling data. They actually know who’s going to win. They don’t tell the rest of us, but they know.

Those exit polls have almost never leaked. It’s a consortium. All the networks share the data, and they’re sealed in a secure room. The only leaks I saw were in 2004 with Kerry, and they were wrong by the way. Of course, Bush won in 2004.

The exit polls were saying Kerry won. Then by eight o’clock they announced George Bush won. I happened to be at a dinner with the CEO of IBM at that time and he had pretty good access to voting results. He knew it was going to be close, and I agreed, so we didn’t get too spun up about the exit polls.

What’s happening now is that two news organizations, Vice, which is an online, alternative media network, and Slate, which is another online magazine, have hired their own people to do their own exit polls. They are both very liberal outlets. They are not pledged to this consortium I just described. They’re going to release those polls throughout the course of the day. I’ve no doubt that this is being done to, in effect, discourage Trump votes or suppress the vote.

If you start hearing throughout the day that Hillary won, don’t be deceived. If you’re a Trump voter don’t stay home. This is the subversion of democracy. For the first time, you have news organizations doing professional exit polls, which actually are accurate, who are going to be revealing the data over the course of the day.

There’s another reason not to trust exit polls…

The answer is the exit polls are skewed based on the time of the day. They tend to be extremely accurate over the course of the entire day. But voting patterns are not linear. That is, you have a lot more women voting early in the day and a lot more men voting later in the day. This is not a gender-based comment. It’s just a fact.

Men are lazy. They wake up. They go to work. They get home from work at six o’clock and have to go vote. But that’s too late for exit polling because it’s too close to the actual deadline. That means voting patterns are skewed based on the time of day. You absolutely get more women in the morning and more men in the afternoon. And more women will vote for Hillary.

So you’re going to hear very biased, so-called scientific exit polls that are not that objective because the results are skewed because they want them to be skewed, or because they will be skewed based on the time of day, for the reason I just mentioned.

Either way, you cannot trust them.