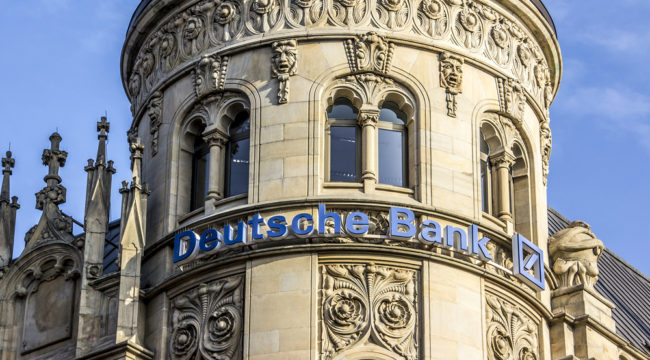 The banking crisis in Italy has gotten all the attention lately, but one of the biggest banks in the world is still a serious potential problem.

The bank in question is Deutsche Bank. It’s the largest bank in Germany, by far, and one of the twelve largest in the world. It is difficult to overstate the importance of Deutsche Bank not only to the global economy, but also in terms of its vast web of off-balance-sheet derivatives, guarantees, trade finance, and other financial obligations on five continents.

It’s well known that Deutsche Bank is the “sick man” of European banking.

Deutsche Bank is certainly in the “too big to fail” category. Therefore it won’t be allowed to fail. Germany will intervene as needed to prop up the bank.

The problems at Deutsche Bank are well-known. They have suffered through bad debt write-offs and mark-to-market trading losses just like many of their big bank peers. But, the problems go deeper. Deutsche Bank’s capital has barely been adequate under generous ECB “stress tests,” and is completely inadequate under real world scenarios involving a global liquidity crisis of the kind we saw in 2008.

This summer, the U.S. Department of Justice announced that it was seeking $14 billion to settle charges that Deutsche Bank engaged in misleading sales practices with regard to residential mortgage backed securities between 2005 and 2007. Of course, that was just a claim. But, even if Deutsche Bank settles the case for a fraction of that amount, say $5 billion, it will significantly impair an already weak capital base.

Not surprisingly, Deutsche Bank’s stock suffered enormously as a result. From a pre-Lehman interim high of €104 per share, it fell to €34 per share by early 2015. That’s a 68% decline, mostly driven by the global financial crisis of 2007-08 and the European sovereign debt crisis of 2011-2015.

Just when investors thought things could not get worse, they did. From the €34 per share level in 2015, Deutsche Bank stock fell again to €10.25 per share in September. That was a massive decline off the lower 2015 base. Its stock has since bounced back.

But it’s still afflicted with bad debts, high expenses and inadequate capital. Management is trying to remedy the situation, but it’s clear that massive amounts of added capital will be needed.

Many potential investors have not wanted to buy in until they are certain that all of the bad debts have been recognized. Yet the process of writing off debts impairs capital further and makes a run on the bank more likely.

Under G-20 rules approved at the Brisbane Summit in November 2014, governments are no longer allowed to bail out banks with taxpayer money. Instead, they must “bail in” the banks by taking capital from stockholders, depositors and bondholders of the bank itself.

This is another dynamic that makes raising funds more difficult. Potential investors worry about dilution of their investment if the bank has to raise more capital in the future.

Deutsche Bank is heading for a funding crisis and a further plunge in its share value, probably to €1.00 per share. This story is quiet for the moment but may return with a vengeance later this month or after the new year.

I use a method called causal inference to make forecasts about events arising in complex systems such as capital markets. Causal inference methodology is based on Bayes’ Theorem, an early 19th century formula first discovered by Thomas Bayes.

This is the same method we used to correctly forecast the outcome of the Brexit vote and the election of Donald Trump. Now we’re using it to forecast the chances of a Deutsche Bank stock collapse in the next few months.

What signals are we getting that indicate a collapse is possible?

The Banca Monte dei Paschi di Siena (BMP) is the world’s oldest bank still in operation, founded in 1472. BMP will require a capital injection if it’s to be saved. And time is running short.

What do the travails of BMP have to do with Deutsche Bank? Both banks are too-big-to-fail and are failing, but BMP is closer to the brink. It’s the “canary in the coal mine” for Deutsche Bank.

Italy wants to bail-out BMP with taxpayer money. That’s the standard playbook that governments used in 2008. But the rules have changed.

At the G20 Leaders’ Summit in Brisbane in 2014, it was decided that bailouts would be replaced by “bail-ins.” In a bail-in taxpayer money is not used to recapitalize the sick bank. Instead bondholders and depositors take haircuts and are involuntarily converted into equity holders.

Imagine if you had $500,000 on deposit at the bank and you got a notice in the mail that said your deposit was now $250,000 (the insured amount) and the other $250,000 had been converted into stock in a “bad bank,” which might or might not produce returns in the future. That’s what happens in a bail-in.

The German government under Angela Merkel has told the previous Italian government that they cannot bail-out BMP; they have to use the new bail-in rules instead. But what’s sauce for the goose is sauce for the gander. If Germany forces Italy to bail-in BMP, then Italy will insist that Germany also bail-in Deutsche Bank when the time comes.

Germany won’t like that, but if they don’t bail-in Deutsche Bank, the European Union will come apart because of acrimony between Italy and Germany. Compared to this dispute, UK Brexit is a sideshow. Greece is a sideshow of a sideshow. Italy is the real deal. If Germany and Italy can’t cooperate, then there is no European Union.

Markets won’t wait while German and Italian politicians tiptoe around the bail-in question. They will draw their own conclusions and possibly start a run on Deutsche Bank.

In the event of a stock collapse, the German government will let Deutsche Bank stock fall to €2 before they intervene. That’s how existing stockholders make their “contribution” to the bail-in.

Deutsche Bank won’t fail and the stock won’t go to zero. But this story is far from over.