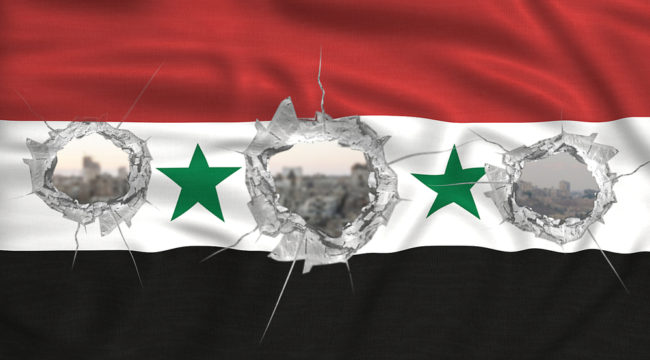 The Donald’s missile “attack” on Syria’s al-Shairat air base is surely the most impetuous, thoughtless, reckless and stupid act from the Oval Office I can remember — and that covers 50 years at least.

And I put “attack” in quotes because it’s now evident that virtually every one of those $1.4 million per copy Tomahawks amounted to a big fat nothing-burger.

36 of the 59 missile were apparent duds and landed somewhere other than the al-Shairat air base, including a nearby village where apparently a number of civilians were killed.

The 23 that did hit the base actually missed the main runway, which, by the way, was back in operation launching Syrian air force sorties within 24 hours. None of Assad’s operational warplanes were hit, either — just a handful of antique MIGs that have apparently long been languishing in the base’s “repair” boneyard.

Yes, the Donald’s sharpshooters did annihilate several glorified Butler buildings, otherwise referred to as “hangars”, and a few fuel tanks — the better for some post-attack fireworks to be posted to the War Channels (CNN, MSNBC and Fox).

But what the Tomahawks surely did not hit was the chemical weapons storage facilities alleged by the Pentagon to be at the base. With Washington’s satellites monitoring al-Shairat like a cloud of bumble bees, there was not a whit of evidence of Syrian personal running around with gas masks after the missiles hit.

Had there been, the War Channels would have been playing it in an endless loop all weekend. Naturally, the Pentagon says these apparently non-existent stores weren’t even targeted owing to humanitarian (?) reasons.

Worse, launching this feckless attack in the midst of Trump’s meeting with the leader of China was surely an amateur ploy right out of the pages of The Apprentice. That’s because within 24 hours of Xi Jinping’s departure from what will now be known as War-A-Lago, the Syrian air force had not only resumed launches from the base, but was actually bombing the very site of the original offense at Khan Sheikhoun!

That gets, of course, to the purpose of attacking any sovereign government that has not attacked or threatened America; and, most especially, one waging a determined fight against the one threat to America’s peace of mind, if not actual physical security, on the planet today.

That is, the radical jihadist head-choppers of ISIS, and particularly the al-Nusra terrorists desperately holed up in their last redoubt in Idlib province. Even if Assad had used chemical weapons — and there is zero proof he did — what possible purpose was there in a pinprick attack on Assad’s military capability that was hailed by jihadists all over Syria and the greater Middle East?

Does the Donald really wish to attack both sides in the most tangled, bloody, sectarian and convoluted civil war in modern history — a course of action he has long, and rightly, criticized?

Did he really reverse in a mere two days, the anti- “regime change” line he had held for years? And one he had wielded to great effect with a “don’t do it” tweet storm in August 2013 in the wake of what now is clear had been a false flag chemical attack staged by radical jihadists in Syria designed to lure Obama into attacking the regime?

The weekend talk show huffing and puffing by Secretary Tillerson and the ignorant little nincompoop he appointed as U.N. Ambassador, Nikki Haley, would leave you to guess, but not really.

At the time of the attack Thursday evening, Administration spokesmen made it clear that the attack was “punishment” for Assad’s violation of international norms about the fair way to kill civilians when waging urban warfare.

And according to the self-appointed tribunes of the moral high ground at the editorial pages of the New York Times, Assad’s alleged attack was so heinous that it cried out for punishment.

So then and there, Donald J. Trump appointed himself the Empire’s Spanker-in-Chief, and thereby destroyed what remained of his stillborn Presidency. Indeed, it will be all downhill from here because the Deep Steep now most assuredly has the Donald by his stubby.

The worst part of the Donald’s spanking campaign, of course, is that the White House has not offered one iota of proof that Assad did it.

Nor has it even attempted to refute the exceedingly plausible Russian-Syrian claim that the regime’s bombing raid in the heart of Nusra Front’s last remaining occupied territory hit a weapons depot where the jihadists were storing not only conventional ammo, but possibly manufacturing projectiles stuffed with chemical agents too.

Do ya think that the Donald could have held off for at least a few days so that an impartial international inspection team could have examined the site and the victims?

By contrast, the Deep State octopus of secrecy today hides behind the pathetic excuse that it must protect its “sources and methods” at all hazards. Therefore it can only “assess” and “judge” out loud that the bad guys actually did it, while the Congress, the American public and the rest of the world should take their word that the intelligence community (IC) has the hard evidence.

For crying out loud, the entire world — and most especially the Russians, Assad regime and assorted other purported malefactors — knows that the skies of the planet are swarming with U.S. intelligence satellites. And that NSA has penetrated every backdoor of the entire global communications grid.

So exactly nothing is being protected by Washington refusal to stump up the SIGINT (signals intelligence) proof if they’ve got it.

That’s exactly what didn’t happen, of course, back in August 2013 when the jihadists pulled a similar false flag to lure Obama into a similar attack. At the time, the White House released a four-page, evidence-free paper pinning the blame squarely on Assad in what it called a “government assessment” because even the IC would not vouch for it.

Needless to say, not a shred of SIGINT was ever released to prove the White House contentions — save for an obvious leak a few days after the event to the ever complaint New York Times which claimed an assessment of the chemical rocket’s trajectory found at the site proved they were fired from deep in government controlled territory more than 12 kilometers away.

As it happened, an international arms control expert and leading MIT scientist in the field, teamed up shortly thereafter to prove from the primitive rockets examined by international inspectors after the attack that they could have had a trajectory of no more than 2 kilometers.

That is, the were fired from the heart of jihadist controlled territory in the villages where the horrific Ghouta attack occurred.

As Philippe Lemonoine summarized in a recent post, the evidence implicated the rebels, not the Assad regime:

Back in 2013, Carla Del Ponte, a member of the Independent International Commission of Inquiry on the Syrian Arab Republic (IICISAR) and the former Chief Prosecutor for the International Criminal Tribunal for the former Yugoslavia and the International Criminal Tribunal for Rwanda, told the BBC that “what appears to our investigations [is] that [chemical weapons were] used by the opponents, by the rebels and we have no indication at all that … the authorities of the Syrian government have used chemical weapons”…

But far be in from the mainstream media to remember back that far.

Needless to say, the Donald will never shake himself loose of this tar-bay. He has the U.S. now in harm’s way in the thick of an inferno crawling with Assad’s allies including the Russians and the Iranians.

I have no brief for Bashar al-Assad. He and his family have ruled Syria for 40 years harshly and more often than not by the sword.

But by inadvertently assisting his jihadist enemies, the Donald may have actually helped revive what amounts to a Taliban in the Levant in the name of protecting Syria’s women and children.