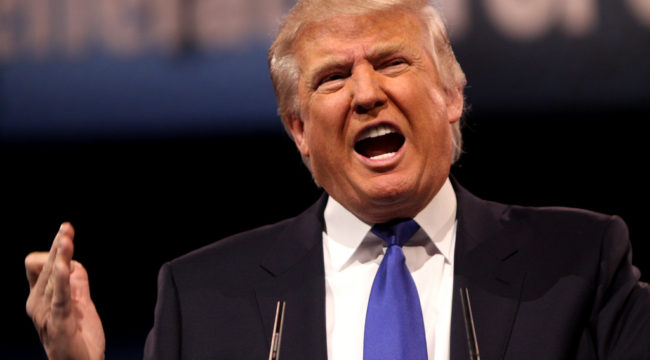 Donald Trump and the Rise of “People Power”

Did last night’s circus resolve anything? Is the best our democracy can do? And more importantly, is Establishment politics dying?

Whatever you think of Donald Trump, his candidacy is one big middle finger to the Establishment. It’s part of the worldwide rise of “People Power.”

The People Power trend, while at a ripe old age in nations such as Switzerland — one of the wealthiest, most democratic countries in the world where its people vote on issues that affect their lives and livelihoods, and not political parties — is now growing globally.

Direct Democracy, anathema in America, the Land of the Free where the two-party Congressional Gang of 535 runs and rules the lives of 320 million citizens, found new life in Mother England when the people voted to put their future in their own hands.

In a stunning upset to the status quo, on June 23, by a 52 to 48 percent majority, United Kingdom  citizens voted to leave the European Union, despite pressure from world leaders and higher financial authorities telling them to remain.

Beyond the UK’s Brexit, there is widespread disgust with the entrenched ruling parties that have been running most European nations since the end of World War II and the centralized control from a supranational Brussels bureaucracy.

Among the key elements that the “Leave” campaign tapped into is the anti-establishment current spreading throughout Europe.

For example, in a paper co-authored by Will Jennings, a professor of politics at the University of Southampton, wrote, “Citizens now describe their ‘hatred’ for politicians who made them ‘angry’, ‘incensed’, ‘outraged’, disgusted’ and sickened.”

Thus, the People Power trend — fueled in Europe by the growing contempt for the ruling elite, the loss of power of national governments to centralized powers, high unemployment, falling wages and a declining standard of living blamed on globalization — is fueling Direct Democracy movements across the continent.

Immediately following the Brexit vote, several populist European parties pledged to launch referendums to “leave or remain” in the 28-member EU bloc. Politician Geert Wilders, leader of the Dutch Party for Freedom, called the Brexit vote “historic” and said, “Now it’s our turn. I think the Dutch people must now be given the chance to have their say in a referendum.”

And, with polls showing that more than 40% of Brexit supporters cited immigration as the most important factor in deciding how to vote — blaming cheap migrant labor for the loss of jobs and human waves of refugees and migrants for a loss of national identity — “keep them out” anti-immigration movements will intensify throughout western nations.

For example, on October 2, Hungary will hold a referendum to reject European Union quotas demanding they accept refugees.

While the current take-back-their-country referendum movements spreading across Europe are anti-Brussels super-state rule from bureaucratic overlords and disenchantment with career politicians, financial elites and an entrenched establishment, the Direct Democracy trend that will spread throughout advanced nations is bigger than Brexit.

Appropriately administered by putting We the People in charge of our destiny, rather than obeying self-serving politicians and bloated bureaucrats that enrich the few at the expense of the many, Direct Democracy provides a blueprint for the revolutionary advancement of society.

Non-violent, intellectually and philosophically sound, emotionally empowering and potentially unstoppable, “In due time, the voice of the people will be heard and their latent wisdom will prevail,” Thomas Jefferson wrote.

However, as illustrated by my dear friend, Thomas Naylor, may his soul rest in peace, depending on the size and composition of nations, there are formidable challenges that must be addressed. In assessing the pros and cons of Direct Democracy in the United States, in part he wrote:

Switzerland is a tiny, well-educated, hard-working country with a strong sense of community. The United States is not Switzerland.

For starters, retrofitting the U.S. Constitution and legal system to accommodate Direct Democracy would require the expertise of a plethora of constitutional scholars and legal experts. For those legal scholars and political scientists up to the challenge of designing such a complex system, courage and dedication will be required.

A process would also have to be developed to bring important issues to the table for consideration by a nationwide referendum. And then there is the matter of the computer network and software required to make Internet voting work. Although introducing Direct Democracy into the United States sounds like a very good idea, it would involve a number of conceptual, legal, constitutional, economic, technical and political challenges. Such a move would require bold, creative leadership combined with world-class marketing skills.

But the alternative is a nation whose government has lost its moral authority and is tightly controlled by a self-serving military/industrial/congressional complex accountable only to itself — a nation that has become unsustainable economically, militarily, socially, environmentally and politically. The United States is so large that it may no longer be governable and has possibly become unfixable.

If there is a way out of our nation’s death spiral, Direct Democracy just might be one of our last remaining viable options. We could do a lot worse than emulate the Swiss.

Naylor founded the Second Vermont Republic and was professor emeritus of economics at Duke University. Naylor co-authored Affluenza, Downsizing the USA and The Search for Meaning.

Naylor’s points are valid. There will be legal hurdles to jump and political obstacles erected that must be overcome. It will take passion and persistence to push the movement forward.

One path of progress in establishing a Direct Democracy is to redesign current antiquated systems with modernized 21st-century online voting. While opponents of Direct Democracy will contend that online voting can be subject to hacking and fraud, it can be far less susceptible than the current stuffing of ballot boxes or rigging of voting machines.

In fact, voting online, with full transparency, would prove more secure than any polling place run by party operatives. Indeed, we bank online and buy online; surely we can vote online!

With fast-accelerating advancements in technology, from artificial intelligence to virtual reality, the only obstacles to online voting are the people’s will to make it happen vs. the politicians and special interests benefiting from the current corrupt system.

Indeed, the so-called representative democracy form of government we adhere to in the West is a hoax… a cruel sham, a bone thrown to the proles following the overthrow of the aristocracies of the 18th, 19th and 20th centuries that gulled the public into believing members of political parties represent their interests… while, as abundantly evidenced with spreading populist movements and the Brexit vote, a vast majority recognize that the current political systems serve special interests, not public interests.

Realistically, can Direct Democracy and online voting become reality? “It does not take a majority to prevail… but rather an irate, tireless minority, keen of setting brushfires of freedom in the minds of men,” said Samuel Adams. Never in modern history have the trend lines for People Power — the freedom of a collective society to shape its destiny rather than living under the dictates of political gangs — been clearer.

As proven by Brexit, (agree or disagree with the vote), the “brushfires of freedom” were not set by “an irate tireless minority,” but rather an irate anti-establishment, anti-status quo, anti-elite, anti-centralized power, anti-globalization MAJORITY.

And win or lose, and for all his faults, Donald Trump represents the awakening of American “People Power.”

Gerald Celente
for The Daily Reckoning

Gerald Celente is founder and director of the Trends Research Institute, author of Trends 2000 and Trend Tracking (Warner Books) and publisher of the Trends Journal. He has been forecasting trends since 1980, and recently called the collapse of ’09. Also a close combat practitioner and black belt trainer, Celente has made many media appearances, including Oprah, CNN, the Today show, Good Morning America, NBC Nightly News, C-Span and CNBC. He has been cited in The Economist, Chicago Tribune, Los Angeles Times, Entrepreneur, USA Today and many other publications.