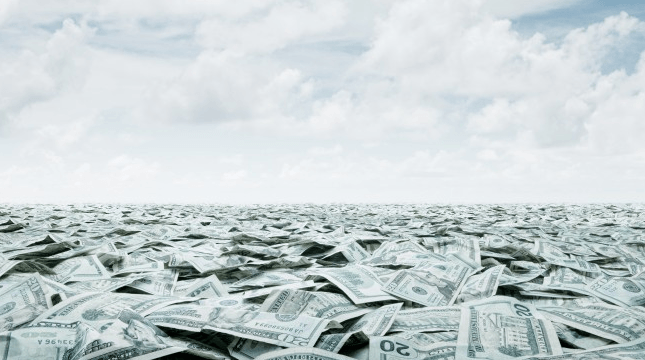 LONDON — No big moves to catch the eye in the markets so far today.

Well, it is summer.

“The serious money is sunning itself on the beach,” as my colleague Tom Tragett puts it.

Financials and miners are dragging the FTSE 100 lower at the time of writing, in contrast with other major European indices.

Greece looks set to get another €86bn that it won’t be able to pay back. But the excitement over that deal is so July 2015.

For the next few weeks, the number one obsession will be the timing of the first post-crisis interest rate hike by the US Federal Reserve

The consensus seems to be that the odds of a Fed rate hike next month are about evens. Jim Rickards will give his own view on the likelihood of that to Strategic Intelligence members later this week.

For my part, I find myself mulling over where the US dollar might go next.

I know many DR readers eschew such short-term thinking, and rightly so. But one likes to keep one’s mind occupied. Speculating about what a currency might do – whether or not one does so with money – fits the bill nicely.

From what I read, the consensus seems to be that the USD will extend its recent uptrend against major currencies. It’s the kind of consensus I find myself tempted to bet against.

The following chart captures my temptation: 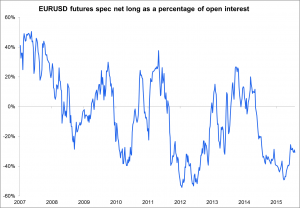 I give a more detailed description of where the chart came from in the PS below. All you really need to know is it gives a measure of how bullish or bearish currency futures speculators are on the euro versus the dollar.

Earlier this year they grew more bearish than at any time since 2012. That year, you may recall, was a real nadir for the single currency’s reputation.

It was that summer that European Central Bank chief Mario Draghi made his now (in)famous “Whatever it takes” speech, promising in effect to put floors under sovereign debt prices in the event of future crises.

More recently, though, sentiment towards the euro appears to have warmed a touch. Even the Greek shenanigans earlier this summer didn’t take bearishness to extremes.

The US market for currency futures is only a small part of the global FX market, so we should be careful about setting too much store by these numbers.

Nonetheless, they imply that bearishness towards the euro just may be getting towards an extreme. If the Fed ends up doing nothing next month, it could set the stage for the dollar to weaken.

Not only might that make the euro a buy against the dollar, it could give commodities a bit of respite, since they tend to be traded and priced in dollars.

You’ll notice a lot of ‘coulds’ and ‘mights’. That’s because personally I’d be wary of taking a position countertrend. I’d also like to see some confirmation of a new price trend rather than try to bet on the timing of a turning point.

For if you’re bolder than me and want another reason to question the dollar uptrend consensus, The Short Side of Long has a couple of interesting dollar charts to get your teeth into.

As I say, I realise not all DR readers trade. Even if you don’t, though, it’s worth keeping an eye on the Fed and on the dollar, since they drive the macro picture.

P.S. To be more specific, the chart above shows the so-called speculative net long divided by total open interest. US futures traders were traditionally split into two camps – the Commercials, who buy and sell futures to hedge their operations, and the Non-Commercials, who buy and sell futures in pursuit of trading profits. The difference between the number of long (i.e. bullish) and short contracts is called the speculative net long.