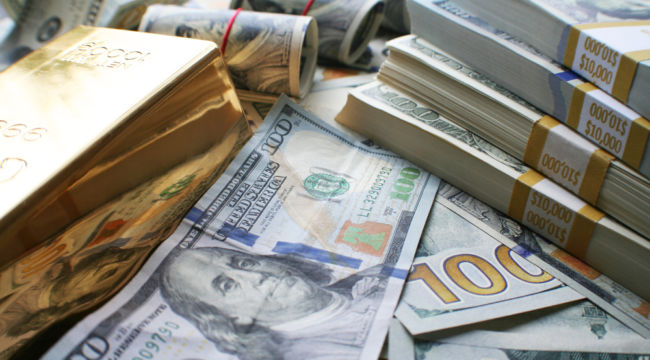 For years, currency analysts have looked for signs of an international monetary “reset” that would diminish the dollar’s role as the leading reserve currency and replace it with a substitute agreed upon at some Bretton Woods-style monetary conference.

That push has been accelerated by Washington’s use of the dollar as a weapon of financial warfare, including the application of sanctions. The U.S. uses the dollar strategically to reward friends and punish enemies.

The use of the dollar as a weapon is not limited to trade wars and currency wars, although the dollar is used tactically in those disputes. The dollar is much more powerful than that.

But for every action, there is an equal and opposite reaction.

These efforts are only increasing.

Russia has sold off almost all of its dollar-denominated U.S. Treasury securities and has reduced its dollar asset position to almost zero. It has been amassing massive quantities of gold, and has increased the gold portion of its official reserves to over 20%. Russia has almost 2,000 tonnes of gold, having more than tripled its gold reserves in the past 10 years. It has actually acquired enough gold to surpass China on the list of major holders of gold as official reserves.

This combination of fewer Treasuries and more gold puts Russia on a path to full insulation from U.S. financial sanctions. Russia can settle its balance of payments obligations with gold shipments or gold sales and avoid U.S. asset freezes by not holding assets the U.S. can reach.

And Russia is providing other nations a model to achieve similar distance from U.S. efforts to use the dollar to enforce its foreign policy priorities.

Certainly any talk of a monetary reset must involve China. Despite its present weakness, China is still the second-largest economy in the world and the fastest-growing major emerging market. Like Russia, China is amassing gold, and likely has far more gold than it officially lists. It has also been helping to suppress gold prices so that it can buy gold cheaply without driving up the price.

Europe has also shown signs that it wants to escape dollar hegemony. For example, German Foreign Minister Heiko Maas has called for a new EU-based payments system independent of the U.S. and SWIFT (Society for Worldwide Interbank Financial Telecommunication) that would not involve dollar payments.

SWIFT in the nerve center of the global financial network. All major banks transfer all major currencies using the SWIFT message system. Cutting a nation off from SWIFT is like taking away its oxygen.

In the longer run, these are just more developments pushing the world at large away from dollars and toward alternatives of all kinds, including new payment systems and cryptocurrencies. The signs of a reset are everywhere, but at least for now the dollar is still king of the hill.

The dollar represents about 60% of global reserve assets, 80% of global payments and almost 100% of global oil sales. With such a dominant position, the dollar will not be easy to replace. Still, the trends are not good for the dollar. The international reserve position may be 60%, but as recently as 2000 it was over 70% and just a few years ago it was still at 63%. That trend is not your friend.

Another challenger to the dollar is the IMF’s special drawing rights or SDRs. The SDR is a form of world money printed by the IMF. It was created in 1969 as the realization of an earlier idea for world money called the “bancor,” proposed by John Maynard Keynes at the Bretton Woods conference in 1944.

The bancor was never adopted, but the SDR has been going strong for 50 years. This article describes how the IMF could function more like a central bank through more frequent issuance of SDRs and by encouraging the use of “private SDRs” by banks and borrowers.

At the current rate of progress, it may take decades for the SDR to pose a serious challenge to the dollar. But that process could be rapidly accelerated in a financial crisis where the world needed liquidity and the central banks were unable to provide it because they still have not normalized their balance sheets from the last crisis.

In that case, the replacement of the dollar could happen almost overnight. Individuals will not be allowed to own SDRs, but you can still protect you wealth by buying gold. That’s what Russia and China are doing. Both countries have more than tripled their gold reserves since 2009.

But attacks on the dollar are not limited to gold or SDRs themselves. The most imminent threat to the dollar actually comes from a combination of gold and digital currency.

The fact that Russia and China have been acquiring gold is old news. Still, there are practical problems with using gold as a form of currency, including storage and transportation costs. But Russia is solving these transactional hurdles by combining its gold position with distributed ledger, or blockchain  technology.

Russia and China could develop a new cryptocurrency that would be transferred on a proprietary encrypted ledger with message traffic moving through an internet-type system not connected to the existing internet. Other countries could be allowed into this new system with permission from Russia or China.

The new cryptocurrency would be a so-called “stable coin,” where the value was fixed with reference either to a weight of gold or another standard unit such as the SDR. Goods and services would be priced in this new unit of account. Periodically, surpluses and deficits would be settled up in physical gold.

Such net settlements would require far less gold than gross settlements (where every transaction had to be paid for in real-time). This type of system (also called a “permissioned blockchain”) is not pie-in-the-sky, but is already under development and will be deployed soon. But you can count on the U.S. government being the last to know.

The development of a gold-backed digital currency is just one more sign that dollar dominance in global finance may end sooner than most expect. And we may be getting dangerously close to that point right now.