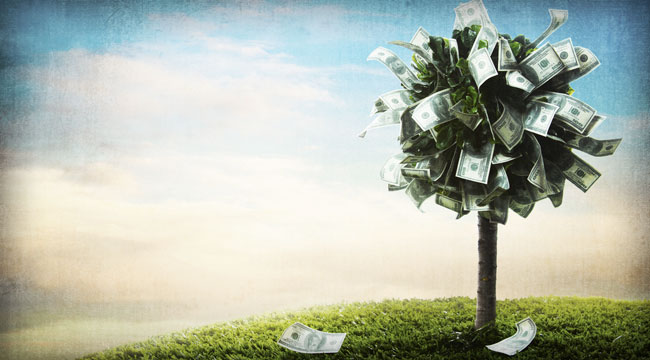 Frankly, the president’s tax proposal should be a major concern for everyone who has carefully planned for their retirement.

Any tax benefits you’ve counted on in your retirement plans could soon suddenly disappear just because you fit into some made-up definition of “wealthy.”

Luckily, there is something you can do to secure some retirement income that can’t be touched by the feds. And it’s perfectly legal, too. In fact, the Supreme Court has declared this income off-limits to the IRS again and again.

I’ll tell you all about these investments that pay big, regular checks the IRS can’t touch in just a second. And I’ll introduce you to three of my favorite ways to use this strategy. Your checks will come monthly — not annually or even quarterly — meaning you can look forward to 36 tax-free checks a year.

And they won’t be small checks, either. The three picks I’ve researched recently yielded an average of 6.75%. That’s the equivalent of a 10.8% taxed dividend, assuming you’re in the 35% tax bracket.

You’ll also have a chance to score capital gains, too. Over the past decade — through stock market disasters, credit crises, wars, terrorist attacks, rioting around the globe — this strategy has returned 75%. That means an average annual return of 7.5%. (Just keep in mind you may have to pay capital gains taxes when you sell.)

You won’t need any special brokerage account, and it has nothing to do with options or anything beyond just telling your broker to simply buy them right from the New York Stock Exchange.

But first, let me explain how big a deal this tax-free income really is.

Over the long term, the municipal bond market is one of the most lucrative and safest around.

You’re no doubt aware that the average S&P 500 stock barely pays a dividend at all — on average, you can expect a lousy 2.1% quarterly payout.

Then Uncle Sam adds insult to injury by taking his cut of 35% or more from investors. Factor that in and you’re left with an after-tax yield of a measly 1.4%. And that hasn’t even factored in the 3.8% tax that Obamacare has added to your bill.

So to balance things out, I’m suggesting you venture into the municipal bond market.

Municipal bonds are simply bonds issued by local governments to fund construction projects. The government pays the bondholder back from collected taxes or even the proceeds from whatever the money helped build.

They’ve been a part of American history since 1812, when New York City sold bonds to help build a canal. It was a novel idea, and it paid off. The people who got in on the ground floor of this new market enjoyed great profits.

That success led to a municipal bond boom, with New York’s Erie Canal bonds being some of the most celebrated.

One of the defining features of a municipal bond is that you don’t have to pay federal taxes on the income. In fact, the IRS has a space for it on its 1099-INT (Interest Income) form, box 8: tax-exempt interest. (Hence why I sometimes call them “Box 8 dividends.”)

Of course, being tax-free hasn’t stopped the feds from trying to get at it.

The first time it happened was in 1895. But the Supreme Court shut that notion down, declaring the income generated by these bonds is, indeed, off-limits for arbitrary taxation by Uncle Sam.

The feds most recently took a swing at this income in 1988. But once again, the Supreme Court stopped them in their tracks. Congress and the White House haven’t tried since, and even if they float the idea of taxing this income to fix the budget problems or punish the “wealthy,” the Supreme Court will likely swat them down.

So your dividend income is safe. But the real question is whether your income stream is safe. If you listen to the news, you know that some city budgets are in comparatively worse shape than Washington’s.

In fact, that’s a reason some doom-and-gloom pundits say to avoid municipal bonds. They prognosticate a tsunami of defaults.

However, the reality is quite different…

The start of the overhyped risks of munis really took hold with the 60 Minutes interview of banking analyst Meredith Whitney in December 2010. Whitney predicted that the muni market was going to be in full Armageddon mode, with defaults running into the hundreds upon hundreds of billions of dollars.

It made for great press, and some of the underlying reasons were correct. Yes, some municipalities have gone bankrupt — a small handful of outliers that made some particularly bad financial decisions. Places like Detroit, Mich.; Harrisburg, Pa.; and Jefferson County, Ala.

But despite the fear those places caused, they really are just anomalies. Over the long term, the municipal bond market is one of the most lucrative and safest around.

It is so safe that the $3.7 trillion worth of the muni bonds that make up the market has seen a trifling amount of bankruptcies. In fact, a leading think tank that follows and advises state and local governments reports that out of the universe of general obligation muni bonds, only one in every 2,710 issues has filed bankruptcy since 2008.

Moreover, if you look at the long-term averages including during times of deep recessions over the past many, many years — the default rates for munis are not only very low, they’re much, much better than for most other bond markets… and light-years better than for corporate bonds.

And if you look well beyond just the past several challenging years — according to reviews by the leading rating agencies — the average for defaults for muni bonds is very low. In fact for the entire muni market, the fail rate is less than 0.20% of all issues.

But the real paydirt of understanding muni bond defaults involves recovery. Just because a muni issue defaults and goes into bankruptcy doesn’t mean that investors lose out. In fact, for most muni issues that have defaulted, the recovery rate for decades is running at 100%. That’s right — 100% of principal was returned to investors, despite defaulting.

You know what corporate bond investors have been getting over the decades when their bonds default? The long-term average is running at only 40%, or 40 cents on the dollar.

To avoid default, the municipalities issuing the bonds need a steady inflow of cash to pay to the bond holders. According to the Center on Budget and Policy Priorities, we’re in good shape here, because tax revenues are up big around the nation.

Consider the case of California. Not so long ago, the state’s budget deficit problems were front-page news. Now the state is enjoying a budget surplus — and many other states, cities and municipalities are following suit.

That’s not all. At the annual Davos, Switzerland, global economic forum, 72% of the 477 economists and market leaders surveyed were upbeat on the U.S. economy and its finances. That’s up from 53% in last year’s survey.

So with tax revenues growing around the nation, and experts convinced the trend will continue, muni bond issuers from coast to coast are better able to keep paying their muni bond interest and principal.

There has been a slight hiccup, though, as the Federal Reserve has spooked the income markets with talk over interest rates and ending their bond-buying. But investors are slowly realizing that any fears about rising interest rates are overblown in the current market environment, and the Fed slowing its “quantitative easing” program hasn’t been the disaster most have been expecting.

That’s pushed the muni market as tracked by Standard & Poor’s up over 5% from recent lows. And that’s just a small setback in the overall trend for munis, which even after all of the hardships of late are still up 32% over the past five years. 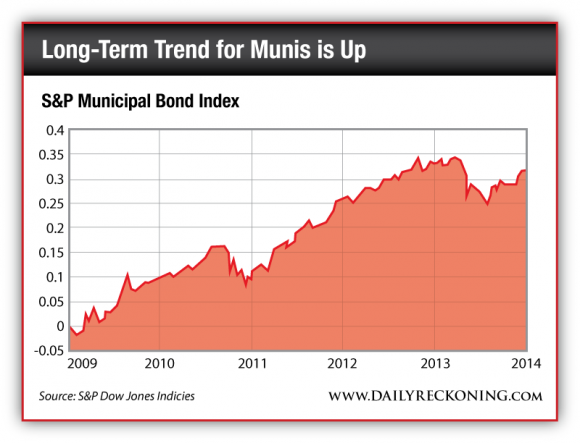 P.S. As good as this market is, I have a muni strategy that could do better — much better — than the rest of the market. It’s a collection of three municipal bond funds that will pay you three big checks every month — for a total of 36 a year — that Uncle Sam can’t touch! And in today’s email edition of The Daily Reckoning, I gave readers a unique access code to learn how to discover these three funds for themselves. Don’t miss another great opportunity like this. Sign up for The Daily Reckoning email edition, for FREE, right here. Your next issue just a few hours away.