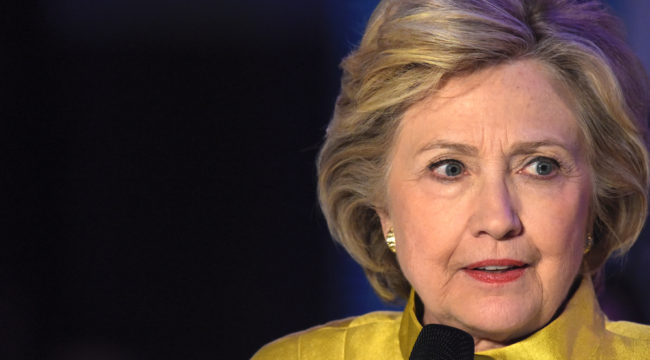 Has the Deep State Dropped Hillary?

Could the Deep State be sabotaging Hillary?

That’s the question The Daily Reckoning’s Charles Hugh Smith has been asking lately.

The Deep State being the “state within the state.” The combination of the military-industrial complex. The intelligence community. And Wall Street.

All pulling unseen strings above the stage, controlling the actors for the pleasure of the audience. The actors being of course the elected officials. The audience being the rest of us.

Smith and a lot of others have believed Hillary is the Deep State’s man. She’d have its ear… do its bidding… crook her knee in its direction.

Trump’s too loose a cannon for the Deep State’s liking. Too independent. Talks up Russia. Doesn’t know the rules, much less follow them.

Here’s what Charles wrote back in August:

“It’s widely accepted that the Deep State fully supports Hillary Clinton’s bid for the presidency and will move heaven and earth to get her elected.”

But Charles had second thoughts…

Maybe Hillary’s not the Deep State’s candidate after all. She could just end up making too much trouble. Her humanitarian-with-a-guillotine act could stumble the country into more useless wars, for example. And the Deep State may have had enough of those. Charles explains it:

“The forward-thinking elements of the Deep State are not averse to aggressive pursuit of what they perceive as American interests, but they are averse to quagmires and policies that preclude successful maintenance of the Imperial Project…”

Civil war within the Deep State? Everyone simply assumes it’s a single block of granite, a thing united. Maybe not.

Again, Charles raised the question in August. He wasn’t sure at that point if the Deep State was chucking Hillary. But now he thinks he’s got the definitive answer. And he thinks the answer is yes, the Deep State’s dropping Hillary. He looks to the WikiLeaks releases to explain it:

“These blast points on Hillary’s campaign…  too accurate for the Mainstream Media. Only the forces of the Imperial Deep State are so precise… the upper ranks of the Deep State now view Hillary as an unacceptable liability.”

Only the Deep State could have organized it all in Charles’ view. And they got FBI director James Comey to reopen the case against Hillary.

So the Deep State has made its decision, according to Charles. If true, the honchos of the Deep State will likely have a little sit-down with Trump if he’s elected. Just to explain the facts of life, a la Don Corleone.

Granted, this all might be worthy of the most tinfoily of hats. We have no idea what’s going on at this point.

But little can surprise us these days…