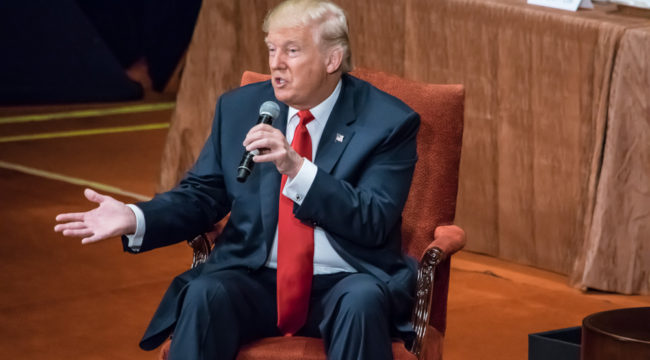 [Ed. Note: To see exactly what this former Reagan insider has to say about Trump and the fiscal threats of the debt ceiling, David Stockman is sending out a copy of his book Trumped! A Nation on the Brink of Ruin… And How to Bring It Back to any American willing to listen – before it is too late. To learn how to get your free copy CLICK HERE.]

Former Director of National Intelligence James Clapper went on NBC this weekend to do his best imitation of the answer he gave under oath in March 2013 whether the phone calls of U.S. citizen were being monitored.

He’s answer at the time was “No, sir.” Yesterday’s response to NBC’s inquiry about whether there were taps at Trump Tower was not dissimilar: “Not to my knowledge.”

Stated differently, the man should be in jail for lying under oath to the U.S. Senate and the voters, as Edward Snowden’s revelations three months later proved beyond a shadow of a doubt. Instead, he was on television presumably lying to the American public yet again.

To find a possibly honest Attorney General who can actually speak publicly on the matter you have to reach all the way back to Mike Mukasey, George W. Bush’s last AG nine year ago. Although aligned with the Never Trumpers, Mukasey left little to the imagination during his appearance on ABC:

“I think he’s right in that there was surveillance and that it was conducted at the behest of the attorney general — at the Justice Department.”

As one of the architects of the Imperial City’s multi-billion, out-of-control domestic spying operation, the man should know. Even Mukasey couldn’t bring himself to deny that Donald Trump is in the gun-sights of the Deep State.

The Wall Street Journal’s editorial page today sums it up as good as any:

Democrats are trying to capitalize on anonymous leaks based on U.S. intelligence collection to destroy the Trump Presidency.

And that gets us to the raging robo-machines of Wall Street. They are betting that the stimulus baton is going to be handed off to fiscal policy; and that the U.S. economy and corporate profits will leap out of their multi-year stupor owing to massive tax cuts, infrastructure and defense spending and sweeping deregulation.

As one dim-witted asset manager said on Bloomberg this morning — the weekend wildness to the contrary notwithstanding — he is bullish because the Trump people are going for “growth.”

Yes, and if dogs could whistle, the world would be a chorus.

What’s actually happening, of course, is that the Deep State and its minions in the permanent governing class of the Imperial City are going for decapitation of the nation’s 45th president.

Accordingly, the odds that any elements of the vaunted Trump Stimulus will see the light of day are somewhere between slim and none.

The reasons are blindingly evident. The checks-and-balances ridden machinery of the nation’s government was designed by the founders to not work even under normal circumstances — based on a well warranted fear of majoritarian excesses.

Indeed, the only time that the machinery can really move with alacrity is when a President is riding extremely high in the saddle and can coax and catalyze Capitol Hill into action. That’s what FDR did during his famous 100 Days in the dark spring of 1933.

And it was also how LBJ rammed the Great Society into law during 1965 after his 1964 landslide victory. Even Ronald Reagan managed to wiggle his giant tax cut through a recalcitrant Congress by a hair owing to a momentary but massive outpouring of goodwill after being nearly fatally shot.

By contrast, when a President is on the ropes, the dead hand of James Madison rules the Washington roost. I was on hand as a bit player when Nixon became the “pitiful helpless giant” he rallied against during his better days in office.

Yet that’s exactly what he became after he fired John Dean and accepted the resignation of his closest aides on April 30, 1973. As it happened, Tricky Dick survived in office another 15 months, but the wheels of government stopped dead in the water.

I expect no less during the next 15 months — to pick an arbitrary period — because if the Trump Stimulus is not enacted by then, it never will be in the run-up to the 2018 elections.

Nor am I predicting that a GOP Congress will impeach the Donald or even try. What I do predict, however, is that Washington will succumb to partisan acrimony of an unprecedented scope and intensity, and that the gang of ideological factions known as the Republican Party will soon splinter into factions while attempting to grapple with the Trump agenda.

This prospect means, in turn, that there is no path to a Congressional majority to raise the debt ceiling when it freezes into law at about $20 trillion on March 15.

As it happened, I was challenged on CNBC last week on this matter by a bullish trader who recalled that the debt ceiling showdowns in 2011 and 2013 quickly passed. The implication was that Wall Street’s hired servants on Capitol Hill dare not contemplate any action that might inconvenience the gamblers and high rollers who dominate the joint.

But those crises were overcome only because Speaker John Boehner was willing on every occasion to sell-out the GOP’s minority of fiscal hawks via a “bipartisan” deal with Nancy Pelosi and Obama. So there is a reason why the words “good riddance” immediately comes to mind when I hear the former Speaker’s name.

But here’s the thing. Boehner is gone and the Democrats are going in for the kill on Trump because they absolutely do not accept the shocking result of November 8. That’s what this entire anti-Russian witch-hunt is all about — a thinly veiled cover story for re-litigating the election of a sitting president.

And that means, in turn, a running constitutional crisis, not a midnight stick save when Uncle Sam runs out of cash a few months down the road.

And if anyone believes that the GOP will patch up its differences and fall into ranks to vote a $24 trillion debt ceiling through in order to accommodate the Trump tax cuts, a huge defense increase, border walls and thousands of more armed guards, they need look no further than the Obamacare “repeal and replace” campaign.

It’s already DOA. In recent days both the Freedom Caucus and the Republican Study group have discovered what I have been saying since Ryan’s plan leaked two weeks ago. The current Speaker is on the very of doing a Boehner Special.

That is, selling out the fiscal conservatives with a phony repeal and replace plan that amounts to little more than Obamacare Lite. They have figured out that Ryan would leave the $5.5 trillion ten-year cost of Medicaid — along with the Obama expansion — largely intact.

And it would simply shuffle one new entitlement — the Obama exchange subsidies for families up to 4X the poverty line — with another age-based “refundable” tax credit, which is just a euphemism for an entitlement.

Hard upon the coming “repeal and replace” fiasco will come the debt ceiling crisis. Yet the boys and girls on Wall Street are so used to getting their stimulus snack from Janet Yellen when they want it, they cannot see the obvious denial coming down the fiscal pike.

When the robo-machines finally figure out the Gong Show raging in Washington means no jam today, they may come to an altogether different conclusion.