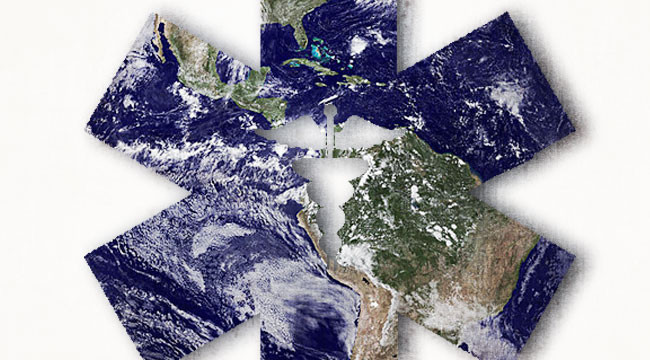 Pascal-Emmanuel Gobry [a senior research analyst for Business Insider] posted a stimulating comparison between the American and French health-care systems. “From my outlook,” he writes, “there’s something that I haven’t seen discussed and yet seems striking to me: how similar the French and U.S. healthcare systems are. On its face, this seems like a preposterous notion: whenever the two are mentioned together, it’s to say that they’re polar opposites.”

Indeed, there are a lot of misconceptions about how America’s health-care system compares to those of the other developed countries, including France. Both liberals and conservatives believe that the American system is a “free-market” or “capitalistic” one, and that European systems providing universal coverage are “socialized.” In this article, I’ll explain where both of these conceptions go wrong.

In reality, per-capita state-sponsored health expenditures in the United States are the fourth-highest in the world, only below Norway, Holland, and Luxembourg. And this is before our new health law kicks in: 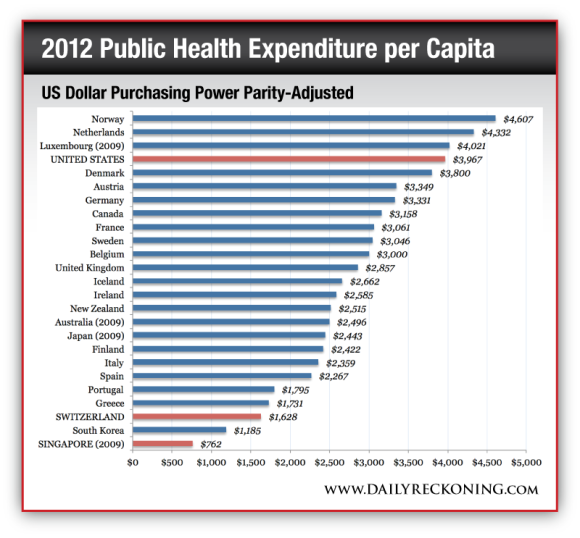 In 2010, according to these statistics, which come mostly from the OECD, U.S. government entities spent $3,967 per person on health care, compared to $3,061 per person in France. Note that these stats are for government expenditures; they exclude private-sector health spending.

If anything, the U.S. figures understate government health spending, because they exclude the $300 billion a year we “spend” through the tax code by making the purchase of employer-sponsored health insurance tax-exempt.

So: if we measure the relative freedom of health-care systems by the dollar amount of government involvement in health spending, the French system is actually meaningfully freer than America’s.

There are, of course, other important things to consider in terms of health-care freedom: do individuals have freedom to choose their own doctor, their own insurance, their own treatments, etc. On these bases, countries like the United Kingdom would fare very poorly. But very few people appreciate that the American government spends far more on health care than nearly every other country.

The thing to remember in America is that we have single-payer health care for the elderly and for the poor: the two costliest groups. In addition, the relatively healthy middle class has heavily-subsidized private health insurance, in which few individuals have the freedom to choose the insurance plan they receive. Neither of these facts commend the American health-care system to devotees of the free market.

One of the most frequently-made arguments in favor of socialized medicine is that it saves money, relative to the American system. And it is true that Europeans et al. spend less per-capita, and as a percentage of GDP, than we do.

But the pro-socialism argument has a glaring weakness: it ignores the two most significant examples of market-oriented universal coverage in the developed world, Switzerland and Singapore, where state health spending is far lower than it is in other industrialized nations. Neither Switzerland nor Singapore could be described as libertarian utopias — both systems contain aspects that conservatives wouldn’t like — but they provide powerful examples of how market-oriented health care systems are more cost-efficient than socialized ones.

I’ve described Switzerland as having the world’s best health-care system. In Switzerland, there are no government-run insurance plans, no “public options.” Instead, the Swiss get subsidies, much like “premium support” proposals for Medicare reform or the PPACA exchanges, from which Swiss citizens buy health care from private insurers. The subsidies are scaled up or down based on income: poorer people get large subsidies; middle-income earners get small subsidies; upper-income earners get nothing.

The OECD puts Switzerland high on the league tables in terms of government health spending, but that is due to a statistical anomaly. Switzerland has an individual mandate; the OECD defines state health expenditures to include insurance premiums that the government requires individuals to pay, even if that spending is on private insurance. That is a debatable approach from the OECD, because the spending goes directly to the insurers, without the government as a redistributor. If you adjust for this anomaly, Swiss state health spending is $1,628 per person (which accounts for the taxpayer-financed premium support subsidies).

The premium support system allows the Swiss to shop for their own insurance plans, which gives them the opportunity to shop for value — something that almost no Americans do. As a result, about half of the Swiss have consumer-driven health plans, combining high-deductible insurance with health savings accounts for routine expenditures.

The other important market-oriented counterexample is Singapore. Singapore has, arguably, the most market-oriented system in the world. Singapore’s GDP per capita is about 20 percent higher than America’s, with comparable (if not higher) health outcomes, and spends an absurdly low amount on health care relative to the West. How do they do it?

The key to the Singapore system is mandatory health savings accounts: again, something that libertarians and many conservatives wouldn’t like. Matt Miller of the Center for American Progress describes Singapore as “further to the left and further to the right” than the American system — something that could also be said of Switzerland.

In a manner somewhat like our Social Security system, Singapore takes mandatory deductions from workers’ paychecks — around 20 percent of wages — and deposits them into health savings accounts called Medisave. Medisave accounts are used mostly for inpatient expenses, but also some outpatient ones. Singaporeans are expected to pay most of their outpatient expenses with non-Medisave cash.

Then there is Medifund, a safety-net program for the bottom 10 percent of income earners, and Eldershield, a private insurance program for long-term care for those with old age-related disabilities. On top of these government-sponsored programs, Singaporeans can buy supplemental insurance for things like outpatient expenses.

Why does this system work so well? Because it incorporates the central idea behind free-market health care: that health-care spending is most efficient when that spending is executed by individual patients, rather than third parties. It’s easy to waste other people’s money. But if that money is your own, you are going to try your best to spend it wisely.

Singapore installed this system relatively recently. Prior to 1984, the former British colony had a system quite similar to that of Britain’s National Health Service. In that year, the government reversed course, with impressive results. Singapore, of course, isn’t a democracy — which allows the government to install sweeping changes that wouldn’t be realistic here. (And in no way should my praise of Singapore’s health-care system be interpreted as an endorsement of the country’s political system.)

The Swiss and Singaporean models wouldn’t be perfect fits for America; we would want to replace the Swiss individual mandate, for example, with a more market-oriented approach like allowing people to opt out of buying health insurance if they also agree to forego subsidized care. But they both embody the most important principle of all: shifting control of health dollars from governments to individuals.

How could something like this come about in the United States? One could imagine a scenario in which Medicare was converted into the premium-support model, such as one of the Paul Ryan plans, with far more aggressive means-testing such that upper-income seniors would no longer be eligible for the program. In addition, the tax exclusion for employer-sponsored health insurance is phased out. The resultant savings could be used to offer subsidized private insurance to lower-income individuals, as a replacement for Medicaid. Obamacare’s exchanges, though seriously flawed in their implementation, have some similarities to this approach. As these programs converge, we could have something that starts to look a lot like Switzerland.

The Singaporean system dovetails with an idea put forth by John Goodman and others: of a universal tax credit that Americans could use to buy health insurance, or possibly even Medisave-like HSAs.

My message to conservatives is: wake up. America’s health care system has many qualities, but it is far more socialized than you think, and we can learn from the experience of other countries to make it better. My message to liberals is: if universal coverage is your goal, the possibility for bipartisan compromise exists, if you’re open to considering market-oriented approaches like those in Switzerland and Singapore. Let’s put our heads together.

A longer version of this article originally appeared in The Atlantic. Follow Avik on Twitter at @avik