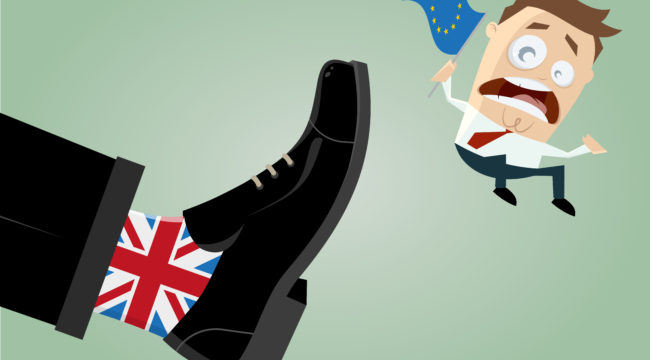 The U.K.’s historic decision to exit (“Brexit”) the European Union has the establishment in full meltdown…

“The will of the people… it burns… it burns.”

European elites now want a re-vote until the Brits get it “right”… or perhaps they ignore the referendum altogether.

But that’s not going to stick. The British people have spoken. And I don’t think the world will ever be the same.

All because they wanted to reclaim the right to govern themselves.

Well, the Brits sent everyone a clear message last week: Piss off.

They rejected the establishment’s “hair on fire” fear campaign to keep the U.K. under the oppressive thumb of Brussels’ unelected bureaucracy.

And frankly, if you’re not feeding at the Eurocrat trough, Brexit is easy to understand and appreciate.

Brits simply voted to restore local government rule that had been outsourced to drunken party boys living off trust funds in other countries.

If you believe that’s racist or fascist, then perhaps a call to your shrink with a major load up on lithium is in order.

Did you know that the EU has unaccountable commissioners with the power to legislate and overrule the elected parliaments of member states?

That set up would have worked well for Stalin circa USSR’s heyday… but it’s not a good fit for the British.

And contrary to media narratives straight out of Hollywood scriptwriters, the Brexit movement wasn’t hijacked by some tiny, far-right faction of Hitler youth.

And the 52% total vote cast for Brexit is higher than any winning governing party since 1931.

The British have had enough of the erosion of sovereignty, 10 years of interest rate manipulation and politicians bought and paid for by sketchy Middle Eastern “new” money.

Uncertainty Is the Only Certainty

What does the Brexit mean to the markets?

Nobody knows what will happen next.

Could Brexit lead to another collapse like 2008? Sure, it’s possible.

But let’s not forget the role of central banks.

After Friday’s chaos, global central banks announced they stand at the ready to intervene should any liquidity issues arise.

What if they all decide to deploy their “helicopter money?” Instead of a collapse, we could get a melt up.

Actually typing that makes me chuckle. “Trusting” central banks to take care of us…

My point is… you can’t make investment decisions based on the assumption that a market collapse is not guaranteed.

The Real Reason Why the Markets Are Spooked…

I believe the U.K. will be fine. It’s the world’s fifth-largest economy. And it will only get more competitive as it escapes from the EU’s “one world government” fantasy.

The real question is what happens to the EU from here? That’s what markets are worried about.

The German and French markets fell almost twice as much as British markets on Friday. And that’s because Brexit is far worse for the EU than it is for the U.K.

Matthew Lynn of MarketWatch nails it…

Much of the EU is in far worse economic shape [than the U.K.]

Italy’s economy is smaller now than it was way back in 2000. Spain has been close to the edge of bankruptcy, and has seen unemployment soar past 20% of the workforce. France is stuck in endless recession, and struggling to maintain competitiveness against Germany…

In those countries, people have genuine reasons to be angry with the EU. If the British can get out and the economy survives, as it will, then why not the Italians or the French? It will be harder and harder to make the case for staying.

That’s where the real danger and opportunity lies.

A Eurozone break-up would be a major market event with implications as serious as the global financial crisis.

Many large European banks would fail. That could lead to a Lehman Brothers-type crisis writ large.

I actually see something possible far beyond Lehman.

We could see so-called respected nation states literally disintegrate like Syria, becoming borderless “Mad Max” swaths of land where “Lord of the Flies” becomes the law.

So how should you prepare?

Not Everyone Lost Money From Brexit

Well, the last thing you want to do is listen to the mainstream predictions that Brexit will cause apocalyptic biblical plagues.

As trend followers, we’re prepared for any and all eventualities.

Even Brexit was a great opportunity?

Two of the most famous trend followers, David Harding and Larry Hite, made 3% and 4% on Friday alone.

I reached out to yet another trend following associate – one based in London. He told me bluntly:

All that fear, dread and hang-wringing by the media hacks? Forget that. We are here to protect ourselves and profit.

We’re happy to ride trends wherever they take us in whatever unpredictable market climate we face.

And we’re also happy that the Brits took a historic stand for freedom and self-determination.

“The Mother of All Systemic Threats”