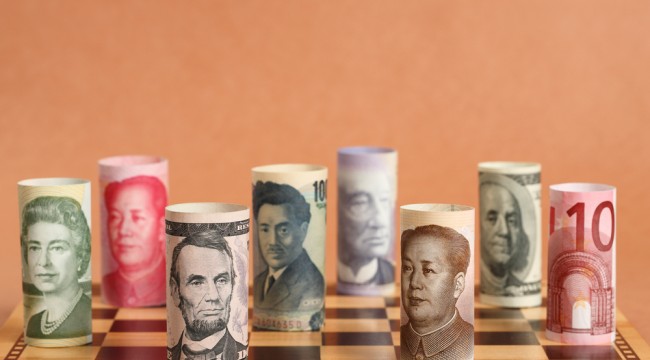 Move somewhere warm… walk out your back door to hit the links… have dinner with your friends….go to church on Sundays… and keep an eye on your savings.

My dad chooses to play a lot of golf. He played five times this week (and twice in one day!).

That is, until you turn on the evening news — or open up the pages of your favorite financial tabloid mag.

This week has been a while ride, with most talking heads focusing on China’s “big” currency announcement.

Indeed, it doesn’t matter how much golf you play or time you spend in the sun. If you’re tuned into the markets, or have some skin in the game, you’ve seen the news about China.

My dad is no exception. However, from time to time, I do have to sit back and explain to him the real story of what’s going on. I may not have a specific “action to take” for him, but it at least helps put everything in perspective.

After all, if you’re living on fixed income, you’ve got to keep your head above water. And knowing what’s really going on in the market is a good place to start.

Today I want to share a letter I wrote to my dad on this very topic with you.

It reminds him, and now you, of the rules of today’s currency game — and what’s really going on.

We need to talk, it’s important.

Most people have the whole story wrong.

But, before I set the record straight on this week’s action out of China, you’ve got to know the basics in the currency market. Let’s start with “Part #1”…

Part #1: A Brief History On Currencies

Remember, from the beginning of time a currency is nothing more than a promise. It’s a place keeper.

When islanders traded with eskimos they may have used seashells or walrus tusks. But, behind the currency was the “real” value: a promise. One shell is worth a bushel of fish, or one walrus tusk is worth a dozen snow fox pelts.

Heck, if you broke a promise back then your “currency” could quickly drop in value. That is, if everyone knew the islanders would break their (1 shell = 1 bushel) promise, less folks would want to hold seashells.

That’s how the supply and demand for currencies began. “Trust” has a market value. 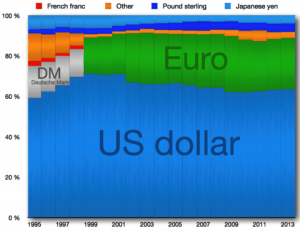 As you can see, central banks hold about 60% of their reserves in U.S. Dollars, the rest is made up of the Euro and the “also rans.”

Of course, sitting at the top of the world’s currency ladder is a favorable seat for the U.S. When central banks world-over need dollars to conduct business, there’s a natural demand for your currency – that demand helps the U.S. Dollar keep its purchasing power.

Remember our islander/eskimo example above? Well imagine if the whole world had to trade in seashells. That gives islanders a distinct advantage over the rest of the world. There’s a natural demand for the “reserve” currency.

Okay, so for 70 years the U.S. has enjoyed the world’s reserve currency status. But, during that same time the “promise” behind a dollar has done nothing but wane.

With more government debt and promises, came the need for more dollars. And with the ability to print money out of thin air the U.S. Federal Reserve started printing away.

After 2008, the once-steady rise in the U.S. money supply quickly turned into an egregious print fest. Take a look… 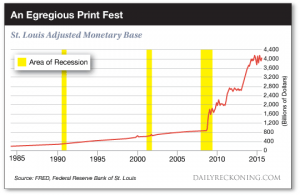 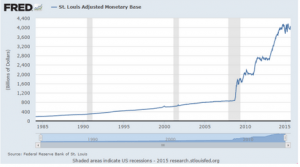 What you see in the chart above is the shot that started the most recent “currency wars” battle.  That is, the U.S. took full advantage of being the world’s reserve currency and started rapidly growing its money supply.

The U.S. wasn’t alone however. After 2008’s market meltdown and economic collapse, most legitimate currencies around the world also started “easing” or devaluing their currency by printing money or lowering interest rates.

The idea is that printing more money or lowering interest rates creates incentive to spend money. And more spending means a better economy.

Okay, if the U.S. was the first major shot in the latest “currency war” then the next big shot came from Europe…

You see, while the U.S. rebounded nicely from the 2008 meltdown, the Eurozone never really recovered. As a quick aside I think the reason the U.S. rebound was simple: we’ve got an active and ingenious workforce along with a bounty of newfound natural resources (see: oil and natural gas) in our boarders. Add it all up, able workers and cheaper input costs led to a healthy rebound from the 2008 meltdown.

For whatever reason (lack of workforce? Technology? Resources?) the Eurozone didn’t rebound. Not to mention, many of their member nations (Greece) were creating more debt than value.

Add it all up and the Eurozone was in trouble. That’s when they fired a “currency wars” bazooka shot.

Starting with rhetoric last May, the European Central Bank (ECB) started an aggressive easing campaign. That is, the ECB started printing money and lowering interest rates.

This is where the real story begins.

At first you’d think that with the ECB printing money, the big effect will be in the Eurozone and the countries that use the Euro. But the effects were much more widespread…

You see, in today’s currency market everything is interconnected. And nothing is more connected than the U.S. Dollar/Euro.

Let’s keep this elementary-school simple. Remember, there’s a direct relationship between the U.S. Dollar Index and the Euro.

Over the past 15 months the Euro, via the magic hand of the European Central Bank (ECB), has been systematically lowered/devalued through a campaign of bond purchases and easing.

In other words, the ECB wanted to start printing money (to juice their economy) and that inherently makes the Euro currency decline.

When the Euro falls/devalues, the Dollar rises.

This is a big deal. For decades the world’s reserve currency (USD) was losing value. Then after 2008 and last year’s subsequent ECB action the U.S. Dollar has skyrocketed. Of note, the U.S. Dollar didn’t rise on its own merit. The U.S. Dollar rose because the Euro fell.

And when the dollar has a dramatic change in value it affects the whole world. Today we’re in a whole new currency world than just five years ago.

Meanwhile, the U.S. Federal Reserve (and Chairman, Janet Yellen) is also spurring the dollar’s rise. Remember the U.S. Fed continues to hint at a coming rise in interest rates. Higher rates also keep the USD flying high on the see-saw.

Okay, so now we’ve got a good grasp on today’s currency connection between the U.S. Dollar and Euro.

Meanwhile, over in the land of ghost cities, cheap labor and chemical explosions…

China pegs its currency to the U.S. Dollar (in an effort to make trade between the two countries straightforward.)

So over the past 15 months as the dollar rose, the Chinese Yuan followed. After all, it was tethered by the announced currency peg.

This caused a huge problem for China. Because while a strong, high-flying currency is good for purchasing power, it’s not good for exports.

Simply put, the Yuan rose too much. It started pressuring China’s export market (the only real engine for continued growth in China.) 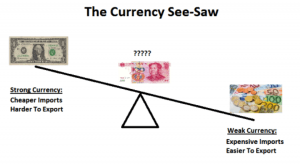 That brings us to this week’s action out of Beijing.

If you haven’t heard yet, the Chinese changed their “peg” rate of Yuan to U.S. Dollars. That is, with the U.S. Dollar soaring high into the clouds the Chinese needed to cut/change their relationship with the greenback. The Chinese economy was gasping for air in the high altitude. So they loosened the peg.

The market is up in arms about this currency move. And frankly most things that I read from the mainstream have it all wrong…

China is playing in a sandbox where they don’t make the rules. Ha, they wish! Instead, what we’ve seen out of the Middle Kingdom is an act of self-preservation, not an act of “currency war.”

To put a fine point on it, what China did this week is a similar situation to what the Swiss National Bank (SNB) did back in January, 2015. The SNB didn’t want the Swiss Franc to flush down the toilet with the Euro, so the Swiss changed their peg.  China’s move this week was to a much less degree. While the Swiss move was to the tune of over 20%, the Chinese move this week was 2-3%.

What we’re seeing is a worldwide contagion stemming from debt problems in Europe, combined with a lack of a “real” recovery since the 2008 meltdown.

It’s the tail wagging to dog. The Euro is see-sawing the dollar. And the Chinese (along with the Swiss) have been caught in the middle.

This story isn’t good, bad or otherwise…it’s just how the world works.

Going forward, you can expect to see even more of these moves. The big story that I think we’ll see in the coming years is the breakdown of the Euro. How does the ECB accommodate a strong economy like Germany while also accommodating economies like Greece? Good question!

At its core the Euro currency was an experiment. Bundling a bunch of different country economies together under one central bank roof isn’t going to end well.

And as we’ve seen over the past 15 months, the falling Euro can play havoc with the U.S. Dollar, other currencies and commodities. Right now we’re watching the ramifications play out.

No currency is going to stand the test of time. Sooner than later the Euro may be the prime example. Meanwhile, don’t blame China just yet.