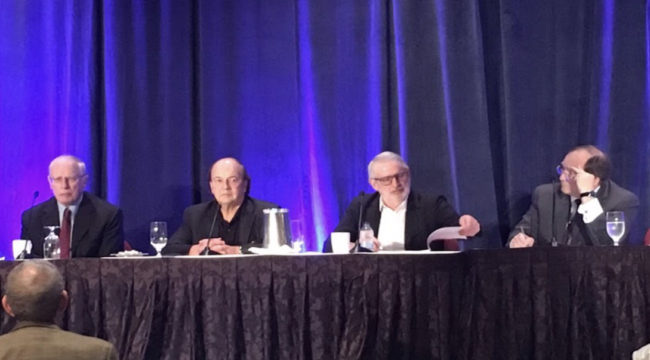 Taking his presentation, we can understand why Jim was voted outstanding speaker at last year’s conference.

He had hundreds of people hanging on his every word Friday morning, all on edges of seats.

But they weren’t enthralled because Jim knows how to work a room.

No, it was his material that enthralled.

It was so current Jim was running the morning’s news through his wringer minutes before he took the podium.

You’re about to catch the highlights of Jim’s knockout speech.

Our own David Stockman was also a keynote speaker Friday.

David was nothing less than a human ripsaw… a tornado on two legs.

He thundered against the Fed from the opening whistle and didn’t surface for air until he had everyone ready to storm the Eccles Building.

His prediction erupted like a thunderclap, sending the assembled into gasps and wild half-demented expressions of shock.

Jim scoured centuries of history to give examples — the Napoleonic Wars, the Opium Wars Britain waged on China — and Japan’s Pearl Harbor job on America.

Have you ever wondered why Napoleon invaded Russia in 1812?

Jim explained that Napoleon had imposed a continental embargo of English goods after the Royal Navy blockaded France.

But he caught Russia cheating.

So he invaded — at least in part — to bring Russia under discipline and enforce the embargo.

We lack the space here to go over the entire canvas.

But we suspect Jim will be writing about the connection between currency wars, trade wars and shooting wars in the days ahead.

And the “troubling trifecta” took on a sharper point Friday…

Subsequent estimates indicated it may have potentially had the legs to menace Denver — or even Chicago.

But China has failed to convince North Korea to abandon its nuclear weapons program.

Now, Jim says, Trump’s getting ready to uncork a trade war against China.

All of his trade top trade advisers are anti-China hawks hot to label China a currency manipulator and teach it a severe lesson on trade.

And he expects China will undertake a “maxi-devaluation” of its currency in early to mid-2018.

That devaluation could range from 10–20%.

Meantime, Congress just passed another severe round of sanctions against Russia last week.

Jim called them an “existential” threat to Russia.

In response, Mr. Putin has threatened “asymmetric” and “painful” retaliation of his own.

So it seems the currency wars and the trade wars are well underway.

Does a shooting war follow to complete the “terrible trifecta”?

Both Russia and (especially) China share interests in North Korea.

And Jim now predicts that war with North Korea is a realistic possibility by early to mid-2018.

We also noted last week how global liquidity presently floating the stock market will begin evaporating in 2018, along with the possible consequences.

We thus begin to look upon 2018 with suspicion.

David sat on a panel later Friday afternoon with Jim, the legendary Doug Casey and another fellow named Adrian Day.

The panel was asked to pick a “black swan” that could blindside markets.

Each panelist spotted one (although Jim doesn’t like the term).

When David’s turn came he said forget a black swan.

Watch for an orange swan instead, one that presently occupies 1600 Pennsylvania.

And the White House will now be going “bonkers,” as David styled it.

He went on to paint a dark picture of executive dysfunction and grand bungling.

Then the thunderclap erupted…

“I predict Trump will be out of office by February!”

It stole the entire show.

If David turns out being correct, don’t forget… you heard it here first.

Alas, we are now back in steamy Baltimore.

We quit cool, breezy Vancouver with all the enthusiasm of a man rushing to catch a train he was eager to miss, as one Helen Hudson so aptly described our condition…

But nonetheless feeling better for the experience.