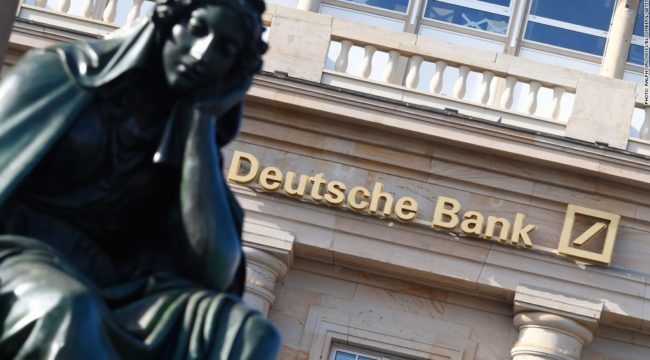 Deutsche Bank is blood in the water… and the sharks smell it.

Yesterday, Bloomberg reported that major hedge funds were reducing their exposure to the German banking behemoth. The smart money is headed for the exits.

That caused the bank’s U.S.-listed shares to hit a new all-time low of $11.27 yesterday. The stock closed down nearly 7% for the day.

And that’s just the most recent bad news for Deutsche…

Earlier this week, Chancellor Angela Merkel said that Germany wasn’t going to bail it out.

That’s on top of $14 billion fine recently imposed by the U.S. Justice Department that the bank can’t afford to pay. Its current market capitalization is just $16.8 billion.

This torrent of negativity has the talking heads warning that Deutsche Bank is careening toward bankruptcy, bringing back memories of Lehman Bros. in 2008.

But it’s more than that…

Leveraged to the Hilt

What investors are finally realizing is that Deutsche Bank is insolvent, something I told my Trend Following subscribers back in July.

Deutsche has astounding leverage of 40 times. Leverage is the proportion of debts that a bank has compared with its equity/capital. That means Deutsche has 40 times more debt than equity/ capital.

Remember, Lehman Bros. was only 31 times leveraged when it imploded in 2008.

The huge concern for investors right now is whether the bank can make enough profit to start overcoming its liabilities.

But it’s trapped in a low-growth economic environment. And it’s being choked to death by the European Central Bank’s negative interest rate policy (NIRP).

Because of NIRP, EU banks like Deutsche Bank effectively have to pay the central bank to hold cash on their balance sheets. At the same time, they can’t charge high rates on the loans they make. As a result, they’re getting squeezed on net interest margins, which decimates profits.

Plus, Deutsche has more than $72 trillion of risky derivatives exposure. Derivatives are the complex financial instruments that cratered the global economy in 2008.

Deutsche Bank’s derivatives exposure is four times the size of the entire EU economy. And it acts as a counterparty to virtually every major bank in the world, across almost all asset classes.

That means its interconnectedness with the rest of the financial system is a colossal problem. If Deutsche fails, it will bring many big international banks straight down the toilet with it.

The Mother of All Bailouts

The bottom line is Germany and the EU aren’t going to let Deutsche Bank go under no matter how much fear the media is sowing. It’s far too systematically critical. Its collapse would be like Lehman Bros. on steroids.

The Eurocrats will soon float anti-bailout posturing like Merkel did earlier this week. That will give them political cover post-bailout when they tell their constituents they had no other choice. The situation was too dire in the end.

And despite Merkel’s protests, the rescue plan is already taking shape…

German news weekly Die Zeit on Wednesday reported that German and EU officials were working on an emergency plan for Deutsche “if the worst comes to the worst.” Change “if” to “when” in that quote for a more accurate assessment.

Look, no one knows what shape the rescue will take. It may be hampered by the new EU rules passed in January that require shareholder bail-ins before any taxpayer money is used for bailouts.

But make no mistake, the European Central Bank and/or the EU will step forward with a new Ponzi scheme to rescue Deutsche Bank. They can’t afford not to. It’s far too large and far too dangerous.

That will prevent a major collapse in the short term and keep the stock market artificially levitated. And that’s mission accomplished as far as the Eurocrats see it.

Michael Covel reveals the massive retirement shortfall you haven’t been told about. Then Michael ​discusses writer and philosopher Ayn Rand and the perils of government control of our lives on Trend Following Radio.