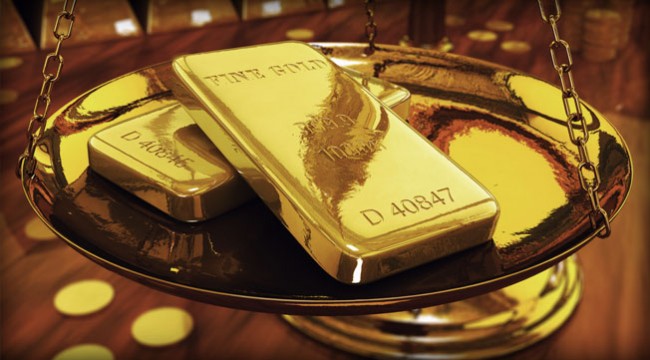 We got a small, if bitter, taste of gold’s “Zero Hour” in the second half of April.

Either that, or the world’s largest banks engineered a takedown of gold for the purpose of staving off  Zero Hour… for now.

As you’ll recall from these pages in March, “Zero Hour” is the name we give to the moment when the price of real, physical gold in your hand starts to break away from the quoted price on the commodities exchanges.

That is, the “physical price” becomes much higher than the “paper price” on CNBC’s ticker. The catalyst, we suggested, would be when a major metals exchange defaults on a gold or silver contract — settling in cash, instead of metal.

To be clear, Zero Hour did not take place when gold’s paper price plunged $150 in only two trading days — Friday, April 12, and Monday, April 15.

But what happened after that plunge hints at what the aftermath of Zero Hour would look like. Real metal suddenly became very hard to come by. We chronicled the worldwide scramble, in real-time, in The 5 Min. Forecast…

Result: If you wanted real metal, you paid a substantial premium over the paper price. In silver, these premiums were off the charts. On Thursday, April 25, spot silver was $23.94… but a Silver Eagle from a major online dealer would set you back $29.54 — as high as the paper price before the mid-April crash!

Meanwhile, the premium on “junk silver” — U.S. dimes, quarters and halves dated before 1965 — sits at four-year highs, according to coin dealer Richard Nachbar. Usually, these coins trade at a small discount to the paper price of silver. Now? As the chart nearby shows, they fetch a 17% premium over spot… and that’s wholesale! 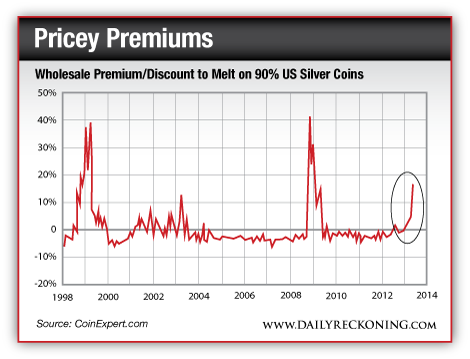 “The April gold crash,” sums up Agora Financial’s own Byron King, “was the beginning of emancipating real gold from paper gold. We’re about to see a ‘real’ price for gold, coming from the bottom up, not the top down. I suspect that we’ll see a solid price rise for gold over time. The market bullies who deal in paper products have just punched themselves in the nose.”

Sprott Asset Management chief Eric Sprott believes Zero Hour is made inevitable by Western central banks “leasing” their gold to commercial banks at less than 1% a year. The commercial banks then sell that gold and plow the proceeds into higher-earning investments.

“Now,” Sprott writes in a new white paper, “our long search for the ‘smoking gun’ to prove our hypothesis appears to have finally materialized.”

The evidence lies in the monthly trade data from the Census Bureau. The December 2012 report revealed net gold exports of $2.5 billion — almost 50 tonnes. This staggering number prompted Sprott and his team to dig through the figures as far back as they exist — all the way to 1991.

Here’s the problem: During that same period, U.S. supply mine production and recycling totaled 7,532 tonnes, while demand was 6,517 tonnes. That left only 1,015 tonnes available for export.

Where did the other 4,489 tonnes come from? “The only U.S. seller that would be capable of supplying such an astonishing amount of gold,” says Mr. Sprott, “is the U.S. government, with a reported gold holding of 8,300 tonnes.”

“If the Sprott analysis is accurate,” says our friend and Crash Course author Chris Martenson, “there’s a lot of missing gold in the U.S. equation, and it had to come from official sources, either of U.S. origin or belonging to other countries. Either way, the leased gold represents a tremendous liability of the Fed and the bullion banks to which it was loaned.”

“In this context,” Mr. Martenson continues, “the gold slam begins to smell like an operation designed to shake as much gold as possible out of weak hands so that the bullion banks can begin to recover it to square up their accounts.

“GLD, the gold ETF that so many small investors participate in, is one large, obvious target,” he adds, “as it was sitting on 1,350 tonnes as of January 2013.”

Sure enough, by the end of April, more than 250 tonnes of that total were gone. On the chart nearby, you can see how the drain on GLD’s inventory neatly tracks the paper price of gold.

“Gold and silver,” Mr. Martenson suggests, “are getting closer to the day when you or I will not be able to purchase physical bullion at any price.”

“I don’t even look at gold as gold anymore… they securitized it,” CNBC’s voluble Rick Santelli said on March 27 — weeks before the big beat-down.

“If things [went] badly in the world that I used to observe as the gold bug, the gold would end up in the hands of the gold bugs. If things go badly now, they’re going to end up with checks from ETFs! Sorry, it’s not the same. The reign of [paper] gold is the Ayn Rand end product. To me, that’s over. Game, set, match.”

The endgame is getting closer. “What I believe is going to happen, probably in the not too distant future,” says Eric Sprott’s right-hand man John Embry, “is that the pricing mechanism of the gold and silver markets will swing to the physical market, which cannot be manipulated, because, basically, either you’ve got it or you haven’t.

“Whereas the paper market has been set up specifically so that it can be manipulated. I would not be too concerned about that, even though they’ve got the upper hand to date. I think that their power is going to be sharply eroded in the very near future.”

But that’s when you won’t be able to get any metal at any price. Best act before then: “The current sell-off in gold,” says Eric Sprott, “should be viewed not with extreme trepidation, but as an unbelievable opportunity to buy the metal at an artificially low value.”

P.S. We’ve been tracking the gold price pretty closely ever since our friend and mentor, Bill Bonner, announced his Trade of the Decade back in 2000 — sell stocks on rallies; buy gold on dips. And while that turned out to be a tremendous trade, it’s only a small part of the much larger story about our favorite yellow metal… Subscribers to The Daily Reckoning email know this better than anyone. If you’re not already a subscriber, we suggest you sign up for free, right here.