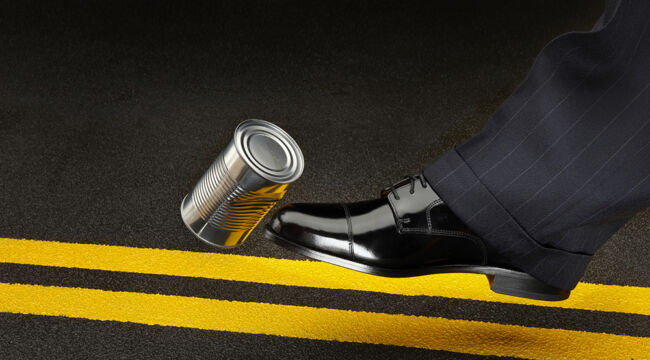 Congress Kicks the Can

Congress was poised to prevent a government shutdown Thursday with hours to go before a midnight deadline.

The Senate and House both passed a short-term appropriations bill that would keep the government running through Dec. 3. The U.S. will avoid a lapse in funding once President Joe Biden signs it into law.

The Senate approved the legislation in a 65-35 vote, as 15 Republicans joined all 50 Democrats. The House passed the bill by a 254-175 margin as 34 GOP representatives and every Democrat supported it.

Barring delays, the House is expected to approve the plan and send it to President Joe Biden before funding lapses.

President Joe Biden will of course sign his name to the legislation.

We hazard many palms were greased… many backs were scratched… many arms were twisted.

Many horses were traded.

And so federal workers essential to the Republic’s safety will remain on station — the customs official at Ketchikan, Alaska — for example.

The Transportation Security Administration will still defend the aerial ways against infants, their great-grandmothers, the crippled and related hellcats.

Social Security checks will still go through the mails.

In event of national invasion, the Marines will answer the bugle.

The Case for Gridlock

At The Daily Reckoning, we are bitterly and ruthlessly antipartisan. That is, we denounce each party for its multiple atrocities (admittedly, some readers do not agree).

Yet if you’ll allow us this one partisan deviation:

It was our sincere wish that the Republican Party retained its Senate majority in 2020’s election.

That is because getting things done generally equates to massive raids upon our liberties, our logic centers… and our wallets.

When government gets things done for A, it must first do things to B.

And so B is knocked about by his own government for the benefit of A.

We find the entire business scandalous.

Our concept of progress grazes against the general grain. Our progress consists of dynamiting most existing government programs and policies.

Decade after decade of government doing for A and C and D and E and F have thrown the nation’s finances into ghastly disequilibrium.

This was true — incidentally — even before the virus invaded its shores. Now all previous projections go into the hellbox, discarded and useless.

In 2018 — merely three years past — the Congressional Budget Office (CBO) projected the national debt would exceed $23 trillion by 2020. Exceed.

We suspect the 2018 forecast was intended to raise the hair, to sound a klaxon. Yet the year is presently 2021.

The nation staggers and groans under a $28.8 trillion debt… which counts higher with each swing of the clock arm.

They glaze the eyes. They stupefy and gobsmack.

Let us begin by considering $1 trillion. The nonprofit Employment Policies Institute places one trillion into this perspective:

But we are a financial newsletter. Money is our central concern. How much time is required to print $1 trillion?

But you are exceptionally energetic. And so you print one $1 bill each second of each day, midnight to midnight, 365 days of the 365.

How much time is required to print $1 trillion? Author Bill Bryson:

Assuming the Almighty grants you your threescore and 10 — 70 years — you will require 452.99 lifetimes to retire this debt.

Thus you may find your future… bleak.

Yet consider the alternative: Would you prefer to spend those 31,709.8 years roasting in hell?

The Bible is quite clear, after all. The unrighteous will not inherit the kingdom of God.

And we are not factoring interest on this debt. We will spare you the calculations for fear of your sanity.

‘What can I do?’ a fellow wonders. His shoulders he shrugs. His head he bows.

He may cluck-cluck his opposition to it all — and what sane man does not?

The Modern Monetary Theory zanies may be for it. They argue that greater and greater debt is the great elixir, the granite foundation of wealth everlasting, the goose that is golden.

But our normal man, he is no zany. He has good, hard sense in him. He is sturdy, he is sound.

He is also powerless. He is a man resigned…