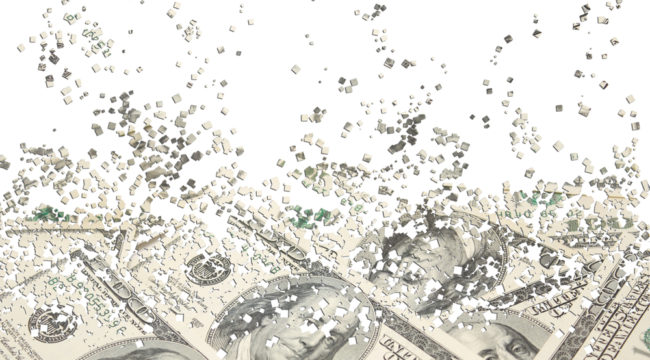 The Mystery of the Treasury’s Disappearing Cash

As of October 24, the U.S. Treasury was flush with $435 billion of cash. That was because the department’s bureaucrats had been issuing debt hand-over-fist and piling up a cash hoard, apparently, for the period after March 15, 2017 when President Hillary Clinton would need to coax another debt ceiling increase out of Congress.

Needless to say, Hillary was unexpectedly (and thankfully) retired to Chappaqua, New York. But the less discussed surprise is that the U.S. Treasury’s cash hoard has virtually disappeared in the run-up to the March 15 expiration of the debt ceiling holiday.

That’s right. As of the Daily Treasury Statement (DTS) for March 7, the cash balance was down to just $88 billion — meaning that $347 billion of cash has flown out the door since October 24.

And I find that on March 8 alone the Treasury consumed another $22 billion of cash — bringing the balance down to $66 billion!

To be sure, there has been no heist at the Treasury Building — other than the normal larceny that is the stock-in-trade of the Imperial City.

What’s different this time around is that the bureaucrats have apparently decided to sabotage what they undoubtedly believe to be the usurper in the White House.

To this end, they’ve been draining Trump’s bank account rather than borrowing the money to pay Uncle Sam’s monumental bills. This has especially been the case since the January 20 inauguration. The net Federal debt on March 7 was $19.802 trillion — up $237 billion since January 20th.

But that’s not the half of it. During that same 47 day period, the Treasury bureaucrats took the opportunity to pay-down $57 billion of maturing treasury bills and notes by tapping its cash hoard.

In all, they drained $294 billion from the Donald’s bank account during that brief period — or about $6.4 billion per day. You wouldn’t be entirely wrong to conclude that even Putin’s alleged world class hackers couldn’t have accomplished such a feat.

At this point I could don my tin foil hat because this massive cash drain was clearly deliberate.

Last year, for example, during the same 47 day period, the operating deficit was even slightly larger — $253 billion. But the Treasury funded that mainly by new borrowings of $157 billion, which covered 62% of the shortfall. Its cash balance was still $223 billion on March 7. Again, that cash balance is just $66 billion right now.

Moreover, the Trump Administration has only a few business days until its credit card expires on March 15 — so it’s also way too late for an eleventh hour borrowing spree to replenish its depleted cash account. (Besides that, I’m predicting a very dangerous market event will start on the 15th.)

The Treasury will likely be out of cash shortly after Memorial Day. That is, the White House will be in the mother of all debt ceiling battles before the Donald and his team even see it coming.

With just $66 billion on hand it is now going to run out of cash before even the bloody battle over Obamacare Lite now underway in the House has been completed. That means that there will not be even a glimmer of hope for the vaunted Trump tax cut stimulus and economic rebound on the horizon.

Needless to say, the punters and robo-traders on Wall Street do not see the coming disaster, either. But have they not noticed that the Donald is unpredictable, impulsive and reckless in the extreme; and that he might take next summer’s midnight debt ceiling showdown to the brink and beyond in a manner that the Boehner/Obama establishment would have never even contemplated?

Besides, where is Trump going to get the votes to solve it?

Trump’s already burned all bridges with the Democrats beyond repair by his immigration ban, deportation orders and Mexican Wall/border control campaign. But after his valid but slightly misstated tweet about Obama’s order to tap the wires at Trump Tower (actually either NSA or the Loretta Lynch did), there is not a Dem vote left on Capitol Hill for anything he wants to do.

At the same time, Speaker Ryan’s Obamacare Lite is already on life support on Capitol Hill, which also has big implications for the debt ceiling battle. The conservative backbenchers realize that Ryan’s plan amounts to another giant Republican-endorsed entitlement and will add upwards of $1 trillion to the nation’s already giant $10 trillion structural deficit over the next decade.

Accordingly, they are in open revolt and the coming campaign from the White House to force them to walk the plank in April will likely end in failure. That’s because the bill will be withdrawn once it becomes evident that the Rand Paul conservatives and the moderates in the Senate are both off the reservation.

Or in the alternative, the House fiscal hawks will be left seething about the blatant fiscal profligacy of the Ryan plan if the Speaker succeeds in ramming it through, Nancy Pelosi style. Either way, a long summer walk on the debt ceiling plank is about the last thing the so-called GOP “majorities” are likely to coalesce around.

But as they say on late night TV, there’s even more. Namely, when the deep state bureaucrats shelved Uncle Sam’s credit card a few months ago and actually paid back $57 billion of debt since the inauguration, they bestowed a huge favor on Wall Street.

Rather than draining cash from Wall Street by selling $157 billion of new debt between January 20 and March 7 as they did last year, they stopped the issuance entirely and actually pumped in $57 billion to pay-off maturing securities.

In a word, the Treasury took its boot off the neck of the bond dealers, thereby enabling the 15% frolic higher in the stock market that has become known as the Trump Reflation Trade.

In all, it amounted to a giant — but temporary — shot in the arm in the casino. It was a quarter trillion dollars freed-up to buy stocks rather than new Treasury issues.

Needless to say, those myths begin to die on March 15 and the screaming aberration of the past four months — that is, a broke Uncle Sam paying down his debt — goes into reverse.

To be sure, as the cash balance dwindles to the vanishing point in the next 90 days, the Treasury will resort to its normal trust fund divestment gimmicks — a maneuver that can only prolong the day of reckoning by a few months. But even then there will be a “surprise” on the other side of the debt ceiling battle that will be even more shocking to Wall Street.

Namely, when the debt ceiling is finally increased, the Treasury will need to borrow at least $500 billion in a matter of days to pay back the trust funds it borrowed from and replenish Uncle Sam’s operating cash.

In that event, the government bond dealers will be selling equities and other “risk assets” like junk bonds hand-over-fist in order to finance the tsunami of Treasury debt.

And as the man says, that’s the good news part of the story. The bad news is that not only is the Obamacare “repeal and replace” campaign opening up a legislative blood bath that will stall tax cuts and infrastructure stimulus indefinitely, but the Trump White House is now demonstrating that it will give the words erratic, incompetence and self-inflicted wounds a whole new definition.

I’ve been saying that the problem with the Wall Street robo-machines is that they can read the words in the financial news headlines, but not the political tea leaves in Washington. With each passing day that proposition is being proved in spades.

And with each new “unexpected” stumble in Washington, the case to get out of the casino with all deliberate speed becomes all the more urgent.