Draining the Swamp 2.0: Trump Versus Reagan

There’s a sudden rage for the idea that Donald Trump is the second coming of Ronald Reagan and that a booming economy and roaring bull market in stocks is just around the corner.

There are even wizened old supply siders still around, like Stephen Moore, who insist that Trumpenomics will cause the U.S. economy to rear up on its hind legs and burst into an explosion of growth.

You might expect Wall Street stock peddlers to wax idiotically about such a fanciful prospect, but it’s downright embarrassing when it comes from an alleged pro-capitalist free market man like Moore.

The growth that did occur during the Reagan era was in significant degree a result of cheating history.

It was fueled by a massive expansion of the public debt followed by an even worse sin against the laws of sound finance. Namely, the Greenspan money printing regime which egregiously monetized the public debt, thereby killing off the bond vigilantes and deferring the ultimate anti-growth “crowding out” effect of soaring public borrowing to the indefinite future.

Ironically, in fact, that debt-choked future has now arrived in spades. It means that Donald Trump cannot possibly do today what Reagan shouldn’t have done back then. That is, enable the U.S. economy to borrow and print its way to a false prosperity that sooner or later must result in economic dysfunction and payback.

The Reagan recovery occurred on the back of a relatively clean national balance sheet. At the time of his inauguration the public debt stood at $980 billion or just 31% of GDP. By the end of the Reagan-Bush era it was nearly $4 trillion, representing an outbreak of peacetime public borrowing that had never before been witnessed in American history.

I have documented at length in both The Great Deformation and Trumped! that the “payback” for this insensible and unjustifiable spree of public borrowing would have occurred long ago — save for the fact that the lapsed gold bug Ronald Reagan appointed to the Fed in 1987 discovered the printing press in the basement of the Eccles Building at the time of the stock market crash in October 1987.

Greenspan soon found that cheap credit and an ample flow of liquidity to the stock market made him the toast of the town. So for 19 years he inflated the monetary system and financial markets like never before, thereby essentially parking the massive Reagan-Bush deficits on the balance sheet of the Fed and other central banks around the world.

Indeed, the other major central banks came to believe that they had no choice except to reciprocate the Fed’s vast monetary inflation. The alternative would have been soaring exchange rates and a massive blow to the export mercantilism on which the economies of most of Asia and the EM came to depend, as well as the petro-states and other raw material suppliers.

But as Herb Stein famously observed, every unsustainable trend sooner or later tends to stop. In that respect, the public debt will surely cross the $20 trillion mark before Donald Trump takes the oath (it’s already above $19.8 trillion). That means it will hit 105% of GDP, crystallizing the fact that we are in a totally different ball game in 2017 compared to 1981. 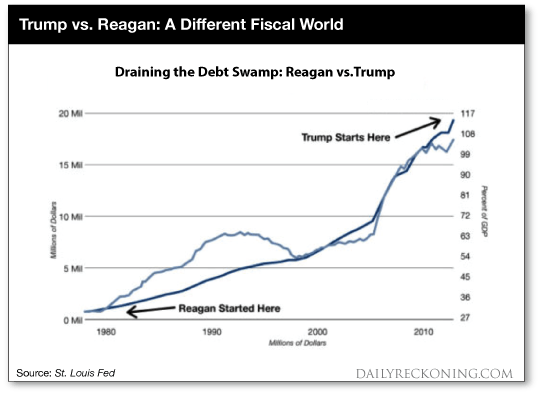 In essence, Ronald Reagan sowed the wind and Donald Trump is inheriting the whirlwind. Back in 1981 there was still massive available runway on Uncle Sam’s balance sheet, but now that has been exhausted — both politically and financially.

In this context, I must remind about the elephant in the room: The Fed is out of dry powder. During three decades of egregiously expanding its balance sheet and monetizing the public debt, its footings expanded from $200 billion in 1981 to $4.4 trillion today. That’s a 22X increase in the monetary fuel during a span in which the nominal GDP grew by only 5X.

Trump’s election will mean a complete breakdown of the monetary and fiscal “stimulus regime” that has fueled a failing, debt-saturated false prosperity on main street and an insane inflation of financial asset values on Wall Street.

I welcome that prospect, of course, because the existing Wall Street/Washington ruling class has brought the nation to the brink of ruin. This mutant regime of casino capitalism, beltway racketeering, imperial aggression and debt-based entitlements and entertainments for the masses, however, will not go quietly into the good night.

So it must have a crash landing first in order for its statist policies to be thoroughly discredited and for the elites who control the levers of power to be tarred, feathered and run out of town on a rail.

Donald Trump called this draining the swamp, and there couldn’t have been a more apt disrupter. But the incorrigible Wall Street gamblers have come up with a 11th hour stick save: The so-called Trumpflation or presumed massive new round of fiscal stimulus via tax cuts and public works.

So my purpose in the weeks ahead will be to smother that bit of idiocy in the biggest wet blanket I can muster. The great Trumpian fiscal stimulus will never happen because the bond vigilantes have arisen from their multi-decade slumber.

That’s owing to the prospect that the Fed is done monetizing the public debt, meaning that front-running the bond market has been suddenly transformed from a highly lucrative spectator sport into a financial death trap.

Upwards of $2 trillion has already been lost in the world’s bond markets since November 8, and the toll is just beginning — as is the implosion of FEDs (financial explosive devices) that had been implanted all over the global financial system by drastic central bank financial repression and falsification of interest rates.

Contrary to the momentary Wall Street euphoria about fiscal stimulus, what is coming down the pike is a fiscal bloodbath. And there is no escaping this fate via the silly hypothetical 4% growth fantasy cited above by Stephen Moore — a view that unfortunately infects the entire Trump team of Wall Streeters and re-tread supply side economists.

In fact, all the economic growth that is possible in an economy freighted down with $64 trillion of public and private debt is already built into the Congressional Budget Office baseline.

In the interim, it is well to recall that Ronald Reagan tried to drain the swamp in 1981, but that he failed completely. The government spending share of GDP never really declined, the Welfare State was left fully intact and the Warfare State grew by leaps and bounds.

But the Gipper got away with failure because Washington kicked the can — by borrowing and printing money — for the next 35 years.

Donald Trump, by contrast, does not even have a vague program to drain the swamp — just a Twitter slogan.

What’s going to happen this time, therefore, is that the swamp is going to win again, and very quickly. And with the Imperial City in chaos and the lie put to the ballyhooed “fiscal stimulus” of the last two weeks — only one result is possible.

That fantastically inflated financial bubble which has been building since January 1981 will finally implode. And this time it will stay imploded because the monetary and fiscal branches of the state have fully and finally exhausted their capacity to defy the fundamental laws of economics and sound finance.