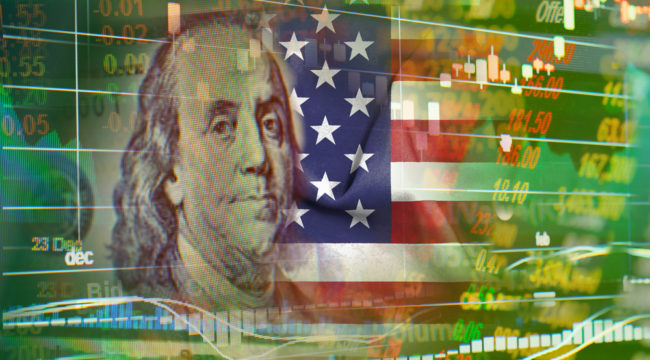 Is the Fed about to drag the world into another financial crisis?

Trump’s election has filled the dollar’s sails with fresh winds. As Neil MacKinnon, economist with VTB Capital, says, “From the perspective of the financial markets, the immediate reaction to the outcome of last week’s election has been a stronger dollar due to expectations of a loose fiscal and tighter policy mix.”

Today, fed funds futures are flashing a 91% probability of a rate hike next month. The likely result: a stronger dollar. But that stronger dollar could reap a whirlwind…

Many fear the world is facing a destabilizing dollar shortage. And they fear a stronger dollar could unleash a global liquidity crisis.

In the words of the Telegraph: “Fear that the U.S. Federal Reserve may have to raise rates uncomfortably fast is leading to an acute dollar shortage, draining global liquidity.”

The answer, says Jim, is that the world created new dollar-denominated debt faster than the Fed created money. Every dollar printed by the Federal Reserve has been lugging around a 20-fold pyramid of debt on its back.

That means the monetary machine cranked out over $60 trillion of new dollar-denominated debt from 2009–2015. Much of it ended up overseas.

“This huge debt pyramid was fine,” Jim adds — “as long as global growth was solid and dollars were flowing out of the U.S. and into emerging markets.”

But under current market conditions — what Jim calls “growth depression,” with a “technical recession looming” — servicing debt could become an impossible burden. A stronger dollar means dollar-denominated debt is more expensive. And debtors don’t have the dollars to pay back those debts. Hence, a dollar shortage.

Jim says this “mismatch” between all that dollar-denominated debt and the investment flows needed to service them speeds the global economy toward crisis:

Everyone wants their money back at once, and it’s just not there. Then they default on their own obligations. And so on. And so on.

Now, just today… Jim warned his subscribers that the Fed’s rate hike next month could be the snowflake that triggers the avalanche. And the Fed’s too oblivious to see it:

Stan Fischer, vice chair of the Fed, has now confirmed my view that the rate hike is coming. That comes as no surprise. What is surprising is Fischer’s comment that he is “reasonably confident” that a Fed rate hike would have no spillover effects in emerging markets. That’s troubling and almost certainly represents wishful thinking on Fischer’s part. In fact, there’s already a global dollar shortage. A stronger dollar resulting from a Fed rate hike could tip emerging markets into a full-blown liquidity crisis.

Fischer, in fact, said earlier today that it’s “certainly too soon to declare that a broad reduction in market liquidity has occurred.” Of course he did.

Maybe Fischer would condemn Jim as a calamity-howler, or some kind of catastrophist. But then he’d better lambaste the Bank for International Settlements, or BIS. The BIS is considered the central bank for central bankers. It doesn’t get more “establishment.”

So… What are the BIS insiders saying? From a BIS report, issued just today:

When so many borrowers have borrowed so much in dollars… dollar appreciation exposes borrowers and lenders to valuation changes and, in turn, impacts their balance sheets… If banks react to resurgent volatility by reducing their intermediation activity, as happened during the 2007–09 crisis, the banking sector may become an amplifier of shocks rather than an absorber of shocks.

The above is bureaucratese for “global liquidity crisis.” It means an overly strong dollar could drain the lubricant from the global growth engine. And the whole thing could seize.

That’s when the global elites step in, according to Jim:

When this new panic hits, investors will have no confidence in the ability of central banks to limit the panic. Unlike 1998 and 2008, the next panic will be unstoppable without extreme measures — including IMF money printing, lockdowns of banks and money market funds and possible martial law in response to money riots.

The cherry on top for the elites: They’d get to blame the whole thing on Trump. Look what Trump caused, they’d howl. His anti-globalism, his protectionism, his immigration restrictionism, all his huff and puff. Only the “experts” could pick up the pieces in the fashion Jim just described.

And next time, there’d be no turning back. The elites would be permanently in the saddle.

Editor’s note: In his new book, The Road to Ruin, Jim exposes the global elites’ plans. And even more importantly, he shows you how to guard your wealth as their plan unfolds.

Here’s a hint of what you’ll find inside:

➤The U.S. government’s “ice-nine” plan to steal your wealth and prevent you from getting your cash. If you have a dollar to your name, you need to read Page 22

➤The secret program for controlling citizens used by elites and leaders from Caesar and Napoleon to Rockefeller and Roosevelt… through both Bushes and Obama. If you think this is some conspiracy theory, you better see Page 58

➤The exact date by which the elites will finally reach their goal of world money under their control. You MUST take immediate and specific action before that. Hurry to Page 186

➤The institution that will decide what the dollar is worth in the near future. (Hint: It is NOT the Federal Reserve, Congress, the U.S. Treasury or the IMF.) Page 70

➤The climate change “Trojan horse” the elites are using to mask a troubling plan for you and the world’s taxpayers. Page 88.

Click here now to claim your free copy. Make no mistake: This might be Jim’s most important work to date.