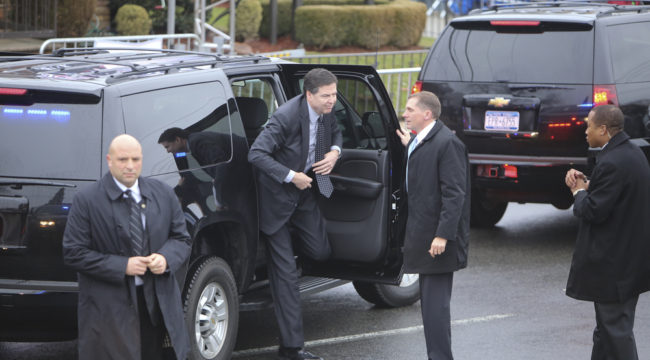 Was Tuesday’s axing of Comey Trump’s latest adventure in four-dimensional chess… or is Trump just a Chinatown chicken playing tick-tack-toe?

And how will Comey’s canning impact Trump’s agenda?

Today we take flight on uncertain wings… in search of answers…

Our antennae first went up a month ago when Trump gave Comey the big, sloppy smooch of death:

“I have confidence in him.”

Comey should have started hawking his resume right then and there (we understand WikiLeaks has great interest!).

Now, off to the fretful world of markets…

David Stockman had been warning readers about a “Retail Apocalypse” that would descend on markets between 7:30 and 8:30 this morning.

We offer David a doff of our hat. Well played, sir.

This could just be the opening round of “Retail Apocalypse.”

And today’s retail rout soured the animal spirits. All three major indexes are down today.

So back to the burning question… why did Trump give Comey the gate?

Just days prior to his release, argues the Times, Comey requested “a significant increase in money and personnel for the bureau’s investigation into Russia’s interference in the presidential election.”

Politico says Trump had “grown enraged by the Russia investigation” and that he would “scream at television clips about the probe.”

And so they’re all yelling blue murder.

If Trump fired Comey to throw off the investigation, many harrumph that Trump undermined the American system of justice.

Possibly meriting Capitol punishment — at least by the lights of The Washington Post:

Every candidate for office in 2018 must be asked a question:If it is determined that Trump fired Comey to interfere with the Russia probe, would that representative vote for impeachment?

“Yes, it really has come to that,” concludes the Post… in a fit of vapors perhaps.

But did Trump really believe that canning Comey would end the Russian investigation?

Surely a foxy customer like Trump knows it would just crank up the heat a hundredfold.

We’re not sure what to make of it all.

(What do you make of the firing? dr@dailyreckoning.com.)

But if Trump’s playing 4-D chess, it seems he put his own king in check…

Trump’s agenda already faced odds that would make us quail.

How’s he going to get his tax cuts and stimulus through Congress now?

The Comey row could set Trump’s agenda back months and months. And divide Congress even further — if that’s possible.

“I think it’s still another story that’s going to slow down Trump’s agenda,” opines Greg Valliere, chief global strategist at Horizon Investments. “We’re going to have a budget fight in the next few months. Nobody has any idea what the Senate is going to do on health care. You have another huge story that’s going to gobble up more time. It’s a distraction for sure.”

A devilishly clever trick to speed up tax and health care reform!

The folks at Strategas Research think Trump’s coup de main could “motivate Republicans to speed up tax reform to preserve their majority in the House of Representatives,” CNBC tells us.

Democratic talk of impeachment increased significantly [Tuesday] night. The narrative is not going away and will continue to hamper the lightly staffed administration. This will also make bipartisan compromise more difficult in the coming months… From a policy perspective, does this in fact force Republicans to get their act in gear and actually get tax and health care reform?…

While distractions from investigations could hinder policy developments, our sense is that Republican members of Congress will want to speed up their policy achievements to overcome recent political developments.

If true, we sit in wordless veneration at the feet of the president… our praise is endless.

Machiavelli wouldn’t be a patch on him.

On the other hand…