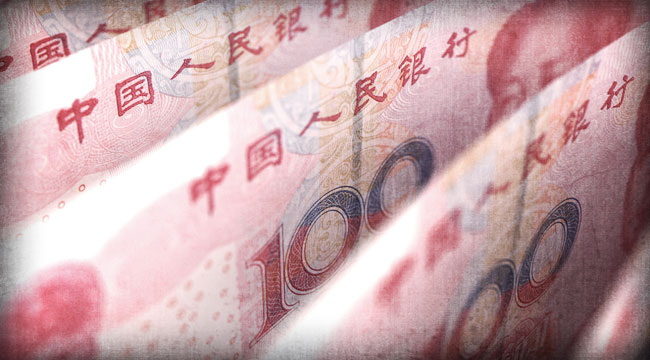 Chinese Wealth Management Products Will Cause the Next Financial Crisis

The next financial crisis will begin in China.

This will be the event in financial markets when it happens. In this letter, I’ll tell you about the trouble spots and ripple effects. More importantly, I want to steer you clear of them.

A few big European banks recently were on the losing end of a $475 million loan, thanks to fraud. The best part of the story was this quote:

There is plenty of evidence of recklessness in China.

“It was a surprise to all the banks. We didn’t know,” said one executive at a Western bank with direct knowledge of the matter. [Italics added].

“We didn’t know…” Of course they didn’t know. How could anyone suspect there would be fraud in China? Let’s see, there are only about half a dozen lenders involved in a suspected fraud case at Qingdao Port. Those lenders are in for a billion dollars. There’s also the case of Nomura. It lent $60 million to a Chinese shoe company just months before the CEO disappeared… along with the money.

Sarcasm aside, there have been several cases of late. Yet the story I started with was a C4 story buried in the middle of The Wall Street Journal. I want to make the case to you that these kinds of stories will work their way to the front page in 2015 — and why it matters.

To make my case, I draw primarily on two expert witnesses. The first is Yan Liang, an associate professor at Willamette University. She gave a fascinating presentation at the Post-Keynesian Conference I attended in Kansas City in September.

The focus was on the shadow banking system. You have probably heard the term “shadow banking” tossed around and wondered what it was all about. The definition can vary, but generally, a shadow bank is a lending institution that does not have the public backstop that normal banks do. (Read: a lifeline from the central bank.) They can also use greater leverage and evade certain regulations.

In China, shadow banking has quadrupled in size since 2008. Lending is not a business that grows that fast without doing reckless things. There is plenty of evidence of recklessness in China.

Liang focuses on the so-called trusts and wealth management products (WMPs). These are vehicles you can invest in that will then pay you a higher interest rate than a bank deposit will. The problem is people tend to think these are as safe as bank deposits. In fact, owning them is about as safe as swallowing a box of nails. 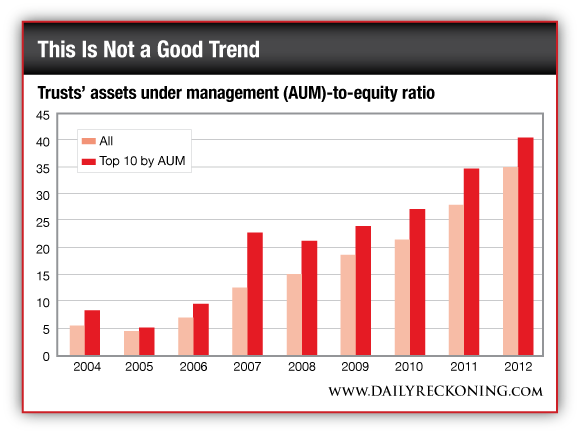 Trusts, for instance, use a lot of leverage. The average is about 40 times for the largest trusts, Liang says. (See the chart above.)

To show you how fragile a 40-times leverage ratio is, let me use an analogy. Imagine you owned your house at 40 times leverage. That means for every $100 of value in your house, you have just $2.50 of your own money in it. In such a case, just a 2.5% drop in the value of the house means you suffer a 100% loss of your equity.

And it is not like the trusts are investing in super-safe stuff. They make risky loans in infrastructure, real estate and industries with excess capacity. Also, they are opaque. Liang says that “only 29 out of 66 registered trusts disclose capital, and most (except for two publicly listed trusts) failed to report returns.” I imagine the ones not reporting are not proud of the results.

The wealth management products are just as bad. To an investor, they look like time deposits. But they pay higher rates because they take your money and invest it in risky loans to small businesses. Worse, Liang says that shadow banks often issue new WMPs to pay off old ones and dodge reporting bad loans. It’s like a big Ponzi scheme.

In fact, a Chinese regulator, Xiao Gang, did call them a “Ponzi scheme” last year in public. (Amazing that he still has a job. People who say stuff like this tend to wind up behind bars.) It’s easy to hide these things in China. Banks “often act alone in originating, distributing, custodying and managing WMPs,” says Liang. There is no independent party monitoring these things.

The maturity of WMPs is also getting shorter. So in 2007, only 10% of WMPs matured in less than 90 days. More than half were at least a year out. By the end of 2010, about 40% matured in less than 90 days. And less than 20% had maturities longer than a year. “But the funds raised could be invested in long-term projects, such as real estate,” Liang says. “So again, liquidity risk is excessive.” In other words, many WMPs hold long-term assets such as real estate on 90-day financing. Crazy.

Add to all this the fact that companies in China are having a hard time making money. The nearby chart, from Liang’s presentation, shows China’s corporate sector performance. The trend is bad. More and more companies are losers (almost 18% of the sector). And the median return on assets (or ROA) has fallen to under 3%. Weak. And these data are a year old. We can only guess where the numbers are now. 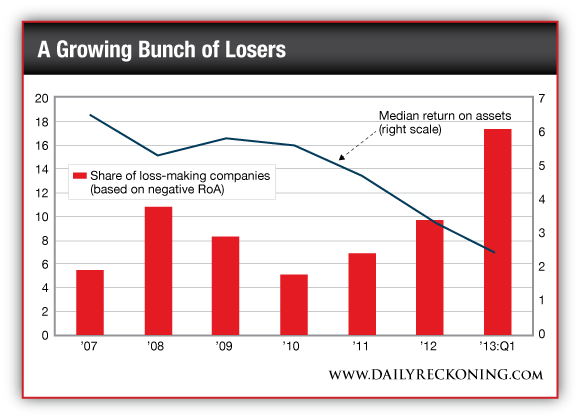 At this point, to further bolster my case, I’d like to call Charlene Chu to testify. I heard her talk at Grant’s fall conference. Her title was “Crash, Boom or Muddle? Casting China’s Future.”

“The China today is not the China of before the financial crisis,” Chu began.

If you go back to the early 2000s, China’s was a banking sector in which there were hardly any other investment alternatives. Everybody put their money in the bank, Chu said. Every bank offered the same interest rate. You had no incentive to move your money from one bank to another. And there was no property market. There was barely a stock market. Chinese banks had virtually no liabilities.

In her analysis, Chu did not care much for GDP growth, which most people focus on. She said it was the “most politicized number in the economic world right now, and it is not that informative.”

Instead, she focused on the massive loan growth in China. For six years in a row, China’s banks have extended net new credit. The total is an “astonishing amount.” If put in U.S. dollar terms, “we’re talking about $5 trillion of credit being extended for six years in a row.

“Under those kinds of circumstances, I think any country in the world would be growing at a very rapid rate,” she said. “The real question we should be asking about China is why isn’t growth stronger?”

China is slowing down, despite massive credit growth. She called into question the big and wide divergence between the picture in the financial data from banks and what is happening on the ground.

“I was in Beijing a couple of weeks ago,” she continued. “Across the board, everybody is expecting a slowdown.”

To answer the question she posed in her presentation, “Crash, boom or muddle?” she quickly dispatched one scenario. “I don’t see any case for a boom.” Neither do I.

Chu says China will muddle. In the Q&A, she did allow that if it got really bad, the Chinese authorities might have to make choices about who they bail out. Foreign bank claims might, in such a case, get the old shaft.

Commodities China buys heavily… would seem to be vulnerable to disappearing demand.

Meanwhile, stupid foreigners (mostly banks) have been lending money in China as if a boom was a given. Lending rose 47% in the 12 months ending in June, says the Bank for International Settlements. China is also the largest emerging-market borrower by far.

Liang also goes for the muddle-through scenario. “State-owned banks dominate China,” she said, “and the central government has the capacity to write off bad debt and recapitalize banks. Think the late 1990s.”

I will dissent from my esteemed China watchers. Markets don’t work so neatly. Big credit problems don’t go quietly into the night. Authorities, even Chinese ones, have no magic wands to wave and make problems go away. Markets boom and bust. I think China’s bust will be nasty and shake global markets to the core.

I would treat Chinese investment ideas as if they have Ebola. Some supposedly smart investors (this means you, GMO!) are bullish on Chinese banks. They cite, among other things, a low price-to-book ratio. But I agree with Chu: “The price-to-book ratios for Chinese banks are not low when you realize that 50% of the capital could be impaired in a very short amount of time.”

Stay away from China. Stay away from firms lending money in China. Those are easy steps. More difficult is to predict the ripples a financial crisis in China would create. Commodities China buys heavily — like iron ore, oil, copper and potash — would seem to be vulnerable to disappearing demand.

I have no doubt China will be a much bigger economy in 10 years’ time. But that doesn’t mean investors have to make money, especially foreign ones.

P.S. I follow a similar set of investment rules, they’re acronym is CODE. Today, I gave readers of our email edition a unique chance to access this system. It’s a small part of the exclusive content you receive when you sign up for our reckonings. Everyday we’ll send you insights and commentaries you won’t find on our site. Click here to sign up for The Daily Reckoning. It’s 100% FREE.