China's Plan to Tank Their Own Stock Market

When I say the fix is in for FXI that’s not meant to be mysterious. FXI is the ticker symbol for a U.S. exchange-traded fund (ETF) composed of the largest Chinese stocks.

The phrase “the fix is in” simply refers to government-backed manipulation. When you combine the two into a government plan to tank their own stock market, at least to a point, you’re as close to a sure thing as stock market indexes allow these days. That’s exactly what’s going on in China right now.

A currency devaluation will likely lead to a stock market collapse, but it’s a trade-off China is willing to accept because a cheaper currency will stimulate exports and support jobs.

China’s motives in market manipulation are about social stability more than profit and loss. Of course, the Chinese have nothing against making money; they’re good at it. But China is controlled by a Communist Party dictatorship that is most concerned about its self-perpetuation.

That self-perpetuation can involve prison camps, thought control and torture if needed, but on a day-to-day basis it’s more likely to involve avoidance of inflation, unemployment and market panics (versus slow, steady declines).

Investors with vague or no recollection of the 1989 Tiananmen Square protest and massacre in Beijing have been taught to recall the event as a “pro-democracy” student rally complete with a 33-foot-tall papier-mâché statue called the Goddess of Democracy that was destroyed as the military cleared the square. That’s a highly selective and misleading portrait of the overall protest.

It’s true that student demonstrators placed demands for more freedom of the press and freedom of speech in their petitions. Yet the origins of the protest were economic. Rapid economic growth in the 1980s had resulted in large gains for some but had marginalized and disgruntled many others.

Inflation was a real tax on those with limited resources and an easily avoided inconvenience for the rich. It was these economic grievances — inequality and inflation — that gave rise to the protests. The pro-democracy aspects were tacked on in the later stages as the crowds grew.

Initially the Communist Party leadership was divided between moderates, like Zhao Ziyang, who favored some dialogue with the protesters, and hard-liners, like de facto leader Deng Xiaoping, who favored a forced breakup of the protest and the arrest of its leaders.

In the end, the hard-liners got the upper hand and the result was a violent military attack on the demonstration. Death estimates vary widely and cannot be verified but range from 1,000 to 10,000 dead protesters. Communist Party leadership itself was thrown into chaos in the aftermath of Tiananmen with Zhao Ziyang being purged and Jiang Zemin being installed as the new hard-line party leader.

This statue, located at the University of British Columbia in Vancouver, is a replica of the Goddess of Democracy first displayed during the Beijing Tiananmen Square protests in April–June 1989.

The ghosts of Tiananmen still haunt the Communist Party leadership almost 30 years later. Economic warfare between China and its trading counterparties is not mainly about economics. It’s mainly about social stability in China, which means avoidance of new mass protests and suppression of widely voiced political dissent.

This econo-political history brings us to the ongoing trade war between China and the U.S. A superficial account of the trade war says it was started by President Trump last winter with his imposition of tariffs on Chinese (and other) goods imported into the U.S. including steel, aluminum and certain appliances.

China retaliated with tariffs on U.S. imports. Trump doubled down with U.S. tariffs on a much longer list of Chinese goods and imposed penalties for Chinese theft of U.S. intellectual property.

China retaliated again, and Trump doubled down again. These tit-for-tat tariffs were rising in $10 billion bumps. Suddenly the happy talk about posturing and empty threats was swept aside. A full-scale, red-hot trade war was underway.

This recent outline is accurate as far as it goes. Yet it leaves out a much longer and more complicated backstory. On Dec. 11, 2001, China was formally admitted to the World Trade Organization, WTO, the legal successor to the General Agreement on Tariffs and Trade, GATT, one of the original Bretton Woods institutions from 1944.

China’s admission to the WTO was the result of years of negotiations and substantive concessions on the part of China. Despite those perceived concessions, China secretly pursued the same policy it has used at the U.N. Security Council, the IMF and other multilateral organizations it has joined in recent years.

Here’s an easy metaphor that captures Chinese behavior: Imagine you’re on the admissions committee at an exclusive club. Your club has a strict dress code that involves jackets, ties and leather shoes even on casual occasions.

A new potential member has applied. They go through the interview process, bring recommendations are informed about the dress code and agree to strict adherence. The new member is admitted. The next day the new member shows up at the bar in cutoffs, flip-flops and a T-shirt.

Your club has a problem.

China’s the same way. They go through rigorous vetting. The organization rules and procedures are carefully explained. China agrees to play by the rules and is formally admitted. The next day, China proceeds to break every rule in the book and, in effect, dares the leadership to sanction them. The sanctions never arrive.

The group has a problem.

From this perspective, the trade war did not begin in 2018; it began in 2001. It was not started by President Trump; it was started by China through rule breaking, theft of intellectual property, export dumping and slow-rolling open markets.

Viewed this way, Trump’s 2018 tariffs on China were not the start of a trade war. They were a desperate effort to stop one before the U.S. is looted further by the Chinese.

China is getting close to tariffs on 100% of U.S. imports. The U.S. can still impose tariffs on another $400 billion of Chinese imports. This is what Trump referred to when he said the U.S. cannot lose the trade war with China because “we already lost.”

Trump’s hope is that China will see it’s playing a losing hand, meet Trump for negotiations and settle on lower tariffs all around. This could expand bilateral trade and be a boost to the global economy.

So far, China has not sought reconciliation. Instead it has injected a currency war tactic into the trade wars to give it more leverage than would otherwise exist. Here’s a chart that shows the radical devaluation of the Chinese yuan, CNY, against the dollar, USD, in the past four months:

In the past four months, the Chinese yuan (CNY) has collapsed 8.5% against the U.S. dollar (USD). From 6.28 to 6.88 per dollar. This is a greater collapse than the August 2015 3% “shock” devaluation that triggered an 11% U.S. stock market collapse. This new devaluation will continue as part of China’s play in the trade wars. This time a Chinese stock collapse is a more likely result. 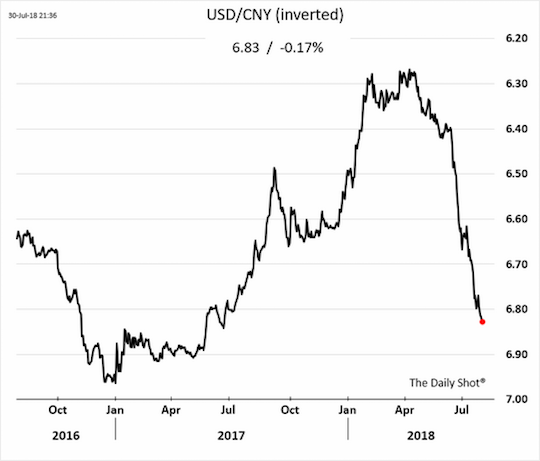 This currency devaluation is China’s reply to Trump. If the yuan dropped 20% against the dollar, Chinese export costs would drop by about the same amount because yuan unit labor costs are a huge part of Chinese manufacturing costs.

China has discovered that devaluation is a near-perfect offset to tariffs. The devaluation tactic not only lowers Chinese export costs; it increases U.S. export costs, as shown in Chart 2 below. 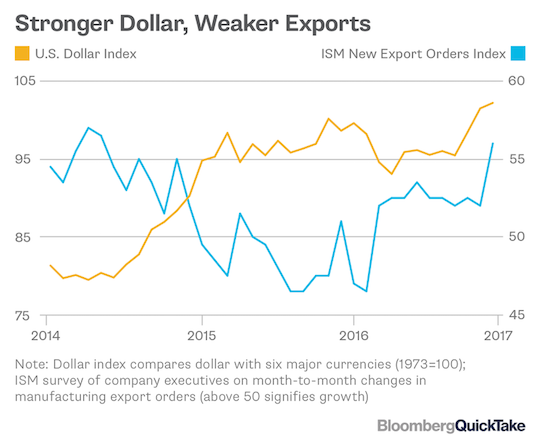 With the trade wars and currency wars now commingled, what are my predictive analytic models telling us about the prospects for Chinese stocks in particular and China more broadly?

Right now, they’re telling us that China is not backing down from its aggressive response to Trump’s tariffs. The Trump team shows no inclination to back down either. The result will be constricted bilateral trade and slower growth at the margin for both countries.

A declining Chinese stock market, as reflected in the FXI price, will be collateral damage in this escalating struggle. It’s not a result that China wants, but it’s a price they will pay in order to keep Chinese citizens employed and assembly lines humming.

Lower unit labor costs combined with higher U.S. tariffs will shift wealth from Chinese enterprises to U.S. importers, but there should be little change in the local currency earnings and job security of Chinese workers. That’s the line in the sand the Communists will defend.

The combined trade and currency wars are like a perfect storm aimed at FXI. Wall Street is misreading these developments, but you don’t have to.