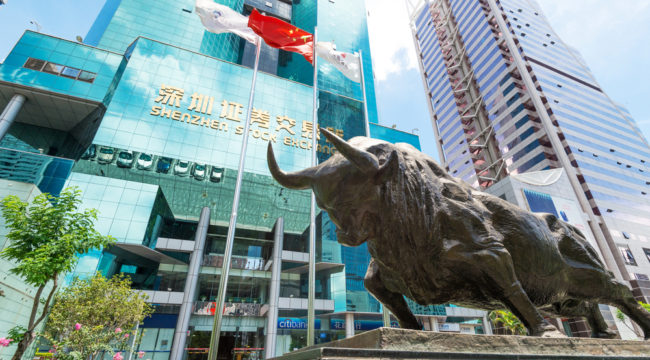 The coming credit crisis in China is no secret.

China has $1 trillion or more in bad debts waiting to explode. These bad debts permeate the economy.

Some are incurred by Chinese provincial authorities trying to get around spending limitations imposed by Beijing. Some are straight commercial loans on bank balance sheets. Some are external dollar-denominated debts owed to foreign creditors.

The most dangerous type of debt involves a daisy chain of insolvent corporations buying debt from each other.

These kinds of accounting tricks will land you in jail in the U.S., but it’s an accepted practice in China as long as the corporate CEO is a “Princeling” (a politically connected Communist Party insider descended from the old guard) or an oligarch willing to pay bribes.

This state of affairs has existed for years. The question investors keep asking is, “How long can this last?” How long can the daisy chain keep operating to gloss over a sea of bad debt and give the Chinese economy an appearance of good health?

Well, the answer is the Ponzi will not likely last much longer. Even compliant Chinese regulators are starting to blow the whistle on bad loans and the banks that cover them up. So the good news is that China is starting to address the problem. The bad news is that if China gets serious about cleaning up bad debts, their growth will slow significantly and so will world economic growth.

Essentially, China is on the horns of a dilemma with no good way out. On the one hand, China has driven growth for the past eight years with excessive credit, wasted infrastructure investment and Ponzi schemes like wealth management products (WMPs).

The Tiananmen Square protests and massacre of 1989 did not start out as a liberty movement, although that’s how they are remembered in the West. It started out as an anti-inflation protest, and that’s how the Communists remember it.

Instead of these unpalatable extremes, the Chinese leadership is trying to steer a middle course with gradual financial reform and gradual limits on shadow banking. I’ve previously predicted that this gradual policy would not work because the credit situation is so extreme that even modest reform would slow the economy too fast for comfort.

That’s exactly what has happened.

China has already flip-flopped and is easing up on financial reform. That works in the short run but just makes the credit bubble worse in the long run.

China may soon resort to a combination of a debt cleanup and a maxi-devaluation of their currency to export the resulting deflation to the rest of the world. When that happens, possibly later this year in response to Trump’s new trade war with China, the effects will not be confined to China.

A shock yuan maxi-devaluation will be the shot heard round the world as it was in August and December 2015 (both times, U.S. stocks fell over 10% in a matter of weeks). The trade and currency wars are far from over.

Get ready for more volatility and drawdowns in U.S. stocks.