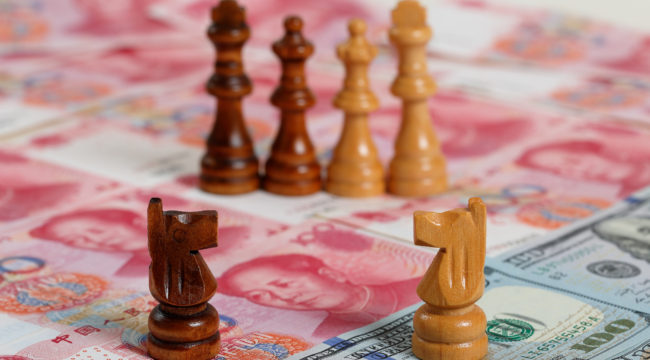 “China is not trying to destroy the old boys’ club — they are trying to join it,” said Jim Rickards in May of 2015.

It was Jim’s pithy way of saying Chinese leaders don’t want to kick over the table where Western powers make Big Global Decisions. They just want a few more seats at that table, in line with China’s status as the world’s most populous country and (depending on how you measure it) the world’s largest economy. 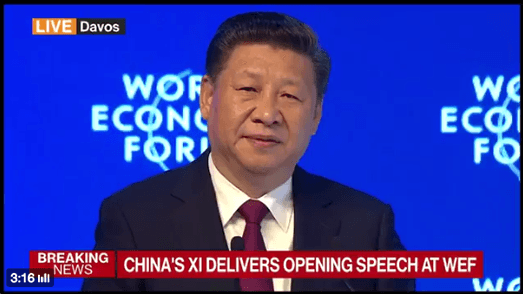 It’s the first time a Chinese president has dropped in on the global elite’s annual shindig in Davos, Switzerland — aka the World Economic Forum.

This year’s gathering is a hand-wringing affair. The elites are dazed and confused by the ascendance of Trump: “There is a consensus that something huge is going on, global and in many respects unprecedented,” says Moises Naim from the Carnegie Endowment for International Peace. “But we don’t know what the causes are, nor how to deal with it.”

And so President Xi Jinping told the assembled worthies all the right things this morning, to wit: “No one will emerge as a winner in a trade war.”

Ah, but what about a currency war? The yuan weakened nearly 7% against the dollar during 2016 — almost double the pace of 2015.

“Mr. Xi also reaffirmed China’s long-standing pledge that it won’t purposefully devalue its currency to help exports and engage in a currency war with its trading partners,” The Wall Street Journal tells us.

That’s an artful dodge. Without explicitly saying so, Xi is leaving open the possibility of purposefully devaluing the currency for a different reason — to avoid depleting China’s foreign exchange reserves.

We return to a chart we shared eight days ago. China’s forex reserves have dropped by 25% from their peak in mid-2014. “This was due to capital flight in various forms, legal and illegal, including debt repayment,” Jim explains. 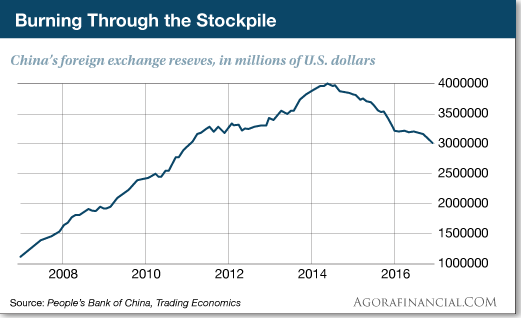 Why the capital flight? “Wealthy Chinese,” Jim goes on, “are trying to get their money out of China as fast as they can because they fear a new maxi-devaluation is coming” — along the lines of 1994, when Beijing devalued the yuan by a third in one fell swoop.

The mainstream would have you believe this chart is no big deal; $3 trillion is still a substantial pile of money, right?

Wrong, says Jim: “About $1 trillion of the remaining reserves are illiquid (for example, hedge fund investments made by China Investment Corp., the sovereign wealth fund).” They’re not the sort of thing that can be sold off in a hurry.

“Another $1 trillion,” Jim goes on, “must be held as a precautionary reserve to bail out China’s banks, which are facing a wave of bad debts from state-owned enterprises and property speculators.”

Uh, all right, but that still leaves $1 trillion. That should be plenty to avoid going broke, right?

Wrong again, Jim says: “Ongoing capital flight is depleting that remaining $1 trillion at a rate of about $80 billion per month.”

We’ll spare you the trouble of extrapolating the numbers: “This means China will be out of liquid reserves,” Jim declares, “and effectively broke as an international trading partner, by the end of 2017.”

What can China do to avoid going broke? “It can raise interest rates to defend the currency, slap on capital controls or devalue the yuan.

“Interest rate hikes will kill the economy and accelerate China’s credit crisis. Capital controls will choke off new foreign direct investment and force capital flight into illegal channels without actually stopping it. A maxi-devaluation is the simplest and easiest way out of the box for China.

“Why hasn’t China devalued already? Part of the reason is to avoid being labeled a ‘currency manipulator’ by the U.S. This could cause retaliation in the form of tariffs. That is why China has been pursuing a slow, steady devaluation, instead of a maxi-devaluation.”

But now along comes Trump to upset Beijing’s calculus. Trump routinely berates Chinese leaders for suppressing the value of the yuan relative to the dollar.

In an interview with The Wall Street Journal last Friday, Trump complained the dollar has gotten “too strong” in part because of China… but he pledged he would not formally label China a currency manipulator as soon as he takes office this Friday. “Certainly, they are manipulators. But I’m not looking to do that.”

Then again, Trump told the Times of London that he’s more or less taking the weekend off and Monday will be what he considers “day one” of his administration — heh.

Here’s the thing: As long as Trump keeps that threat hanging over Xi and his deputies, they have zero incentive to delay a maxi-devaluation.

“The U.S.,” Jim says pointedly, “will have taken away China’s only motivation to play nice.” No reason not to rip the Band-Aid off and get it over with, right?

Will they pre-empt Trump and do it on Friday, stealing his inauguration thunder? Or will they wait a couple more weeks or months? They can’t wait too long; remember, Jim says China will be out of liquid forex reserves by year-end.

Whenever it happens, “the resulting currency and trade war will make the 11% stock market correction of 2015 look like a picnic,” Jim says.

In fact, Jim believes it could add up to the biggest global currency shock since the British pound was devalued 50 years ago.