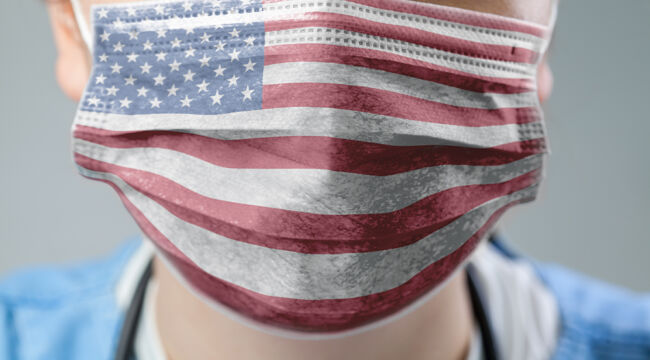 Since the outbreak of the pandemic, the “respectable” media has pushed the theory that the virus came from a wet market in Wuhan, China.

Any talk that it might have come from a bioweapons lab in Wuhan was dismissed as a conspiracy theory.

But the Bulletin of Atomic Scientists, not exactly a fringe organization, published a paper recently acknowledging the possibility that the virus escaped from a lab.

It didn’t say definitively that the virus escaped from a lab, but it maintained that it’s a legitimate possibility, not just some baseless conspiracy theory.

The origins of the virus are still being debated, but here’s what we do know:

The outbreak of the COVID-19 pandemic began in November 2019 in Wuhan, China. From there, it spread west to Milan, Italy and east to Seattle, Washington.

The virus mutated in Italy, then spread to New York, where it hit the tri-state area (NY, NJ, CT) viciously in March-April 2020. Eventually, it spread to the entire world with severe outbreaks in Melbourne, Madrid, London and Lima.

Over 3.2 million around the world have died from COVID. Even now, the virus is out of control in Brazil and India.

Although lower caseloads and much lower fatality rates are emerging in the U.S. and elsewhere, the pandemic is far from over.

The progress is due to both herd immunity from infected survivors with antibodies and the impact of experimental gene modification treatments from Moderna, Pfizer, Astra-Zeneca, and others.

The end is in sight, if not quite here. What have we learned?

Obviously, public health authorities around the world were completely unprepared for a health emergency of this magnitude. There were severe shortages of personal protective gear, masks, oxygen, testing kits and trained staff.

China was grossly negligent to the point of criminality in covering up the outbreak, not allowing foreign experts to research the outbreak or possible cures on-site, and blaming others for their negligence. Still, the list of government blunders doesn’t stop there.

The lockdown response used by the U.S. and other countries did no good medically and was immensely destructive from an economic perspective.

Scientific evidence that lockdowns don’t work to contain a virus was available in 2006. The anti-lockdown view was widely shared long before that.

Evidence from the 50 states in the U.S. (which had varied lockdown policies) and 30 countries around the world shows that there is no correlation between lockdown policies and virus spread. Orders for extreme, moderate, or no lockdowns all resulted in similar caseloads and fatalities.

Lockdowns had no material impact on the course of the disease.

But, lockdowns did destroy businesses and jobs. Large parts of the economy were simply destroyed and will never recover – they’re gone. Lockdowns also increased suicides, drug and alcohol abuse as well as domestic abuse.

The CDC, White House, state governors and other officials adopted lockdown policies without knowing if they worked (they don’t) and without considering the costs, which resulted in trillions of dollars of lost wealth and output.

But governments were not the only culprits in giving bad advice and implementing ruinous policies during the pandemic. Scientists were just as negligent. In fact, governments used “the science,” however flawed the science turned out to be, to justify their draconian policies.

Often, government and scientists worked hand-in-hand, with science offering flawed projections and governments taking the bad advice and using it to force destructive policies on the public.

There are many examples of this. Perhaps none are worse than the Imperial College-London (ICL) models.

Any model is only as good as the assumptions behind it. Real scientists know that no model is perfect. Good scientists continually update assumptions to compensate for output that deviates from observations.

The best scientists will discard a defective model and start over to produce a better one. These best practices are often ignored by scientists, who are more interested in attention, power or research grants.

That seems to have been the case with regard to the ICL pandemic models rolled out in the early stages of the pandemic and used by governments all over the world to guide policy.

The ICL chief epidemiological modeler, physicist Neil Ferguson, produced forecasts that said the U.S. would suffer 2.2 million deaths; the actual number is 581,056 as of today.

Egregious overstatements also occurred with regard to Sweden, South Korea, and Japan. If that were the whole story, it would amount to nothing more than a discredited scientist and his institution. But, ICL’s badly flawed projections had momentous real-world consequences.

Governments around the world grabbed onto the ICL nightmare scenarios to impose lockdowns that had even more nightmarish consequences. This was a case of bad science leading to even worse public policy.

The evidence is clear today that lockdowns, masks and social distancing don’t do any good. Our own Centers for Disease Control (CDC) grossly overstated the risk of outdoor transmission of the virus.

The only policy recommendations that made sense were washing your hands and staying home if you had symptoms. There were no lockdowns during the Hong Kong flu of 1968 or the Asian flu of 1957.

Let’s hope we don’t suffer another pandemic of the kind we’ve just been through. If we do, let’s hope cooler heads prevail and don’t destroy the economy again for no good reason.

But despite the happy talk coming out of Washington and Wall Street, the full economic effect of lockdowns hasn’t hit yet.

This massive monetary and fiscal response to the pandemic could be called the visible part of the bailout. There was also an invisible part.

Meanwhile, the landlords had to keep paying mortgages and property taxes, which put 100% of the economic burden of the pandemic adjustment on the landlords’ shoulders. What was the statutory or legal authority for these orders?

Some were justified by explicit statutes, but many economic relief orders were issued by the CDC under a broad interpretation of its powers during a public health crisis. Now, litigation challenging these orders is making its way through the courts.

A judge in the U.S. District Court has just ruled that the CDC eviction moratorium is an illegal use of CDC’s public health powers. This is the first of many moratoria and grace periods that are set to expire.

The full economic impact of the pandemic has never been felt, partly because so much debt and rent were held in abeyance. As those back payments become due, a new way of defaults will ensue. But the media isn’t paying much attention to that.

The economic damage lockdowns have caused will not be undone in weeks or months. Much of the lost wealth is permanent. It will be inter-generational.

Growth will return, but it will be weak. Investors should go into the post-pandemic world with clear vision.

The government was wrong in the policy response, and they’re wrong again in their rosy scenario forecasts.