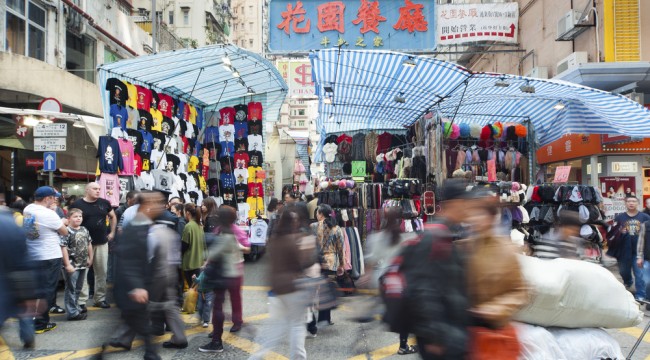 In contrast with recent months, UK inflation figures came in higher than expected.

Those who put lots of weight on the latest data point can breathe a sigh of relief. The spectre of deflation has been chased away from these isles.

The news gave the pound a boost. An uptick in inflation makes it that bit more likely the Bank of England will raise interest rates sooner (they wouldn’t dare if it they thought it risked tipping the economy into deflation).

Before we get carried away, July’s consumer price index was up by a mere 0.1% annually. Producer prices continued to fall, albeit at a slower rate (though if you strip out food and energy they too ticked higher).

But the market needs something to trade, and these are the only major numbers out today.

Today’s market misery comes, not for the first time lately, from China.

To put that in perspective, that’s like the FTSE 100 losing nearly 400 points in a single day, or the Dow dropping more than a thousand.

“I am still very concerned by what’s going on over there as I know just how important these Chinese markets are to the whole global outlook,” says our currency trading expert Tom Tragett.

“This makes me even less inclined to buy into anything equity or commodity related for the time being still as has been my directional bias for several weeks now.”

As I covered last week (see here and here) China has changed the way it manages its exchange rate. That caused the yuan to drop sharply against the dollar, though the exchange rate has settled down for the time being.

The question now is whether the yuan’s move really was a “one-off”, as China’s authorities are keen to suggest. Or can we expect it to fall further?

Chinese Shoppers Have Been Enjoying a Strong Currency

A techy friend used to do some pro bono work maintaining a website called chinaSMACK.

If you haven’t heard of it, they post summaries of news stories popular in China along with translations of selected comments made by ordinary Chinese.

Back in February one particular story caught my eye. It was titled ‘Chinese Man Spends 200k to Buy Goods in Japan, Uses Shipping Container to Transport Them to China’

You can read it here if you like, although the headline pretty much tells you what happened.

The story caught my eye as it was a classic strong-currency-weak-currency story.

Japan has deliberately (and successfully) been weakening the yen over the last few years. The yuan, until last week tied to the dollar, has strengthened against the yen as a result.

Here’s the translation of how one Chinese reader reacted to the story:

Those of us who’ve enjoyed loading up on foreign goodies during periods of sterling strength will recognize the impulse.

I knew at the time the pound was unlikely to hold those levels, and so it proved.

Here’s an interesting fact. The story about the bloke needing a shipping container to get his stuff back from Japan was posted on February 28. On that day one yuan was equal to 19.09 yen.

If China’s going to claw back some of the ground lost to Japan, it’ll need its currency to fall a lot further yet.

If that happens, it’ll mean China effectively ‘exporting’ deflation to the rest of the world. Positive inflation readings like the UK got today could become less common.

There is always the chance that China’s authorities are serious about rebalancing their economy towards consumption. That they’ll be happy to see the trade surplus further eroded if it puts the country on a more sustainable path.

If another translated comment from that story’s anything to go by, though, there’s work to do on that front too:

And [the government] says it wants to stimulate domestic consumption, yet these days, just how many domestic products can consumers buy without worrying [about quality/safety]?