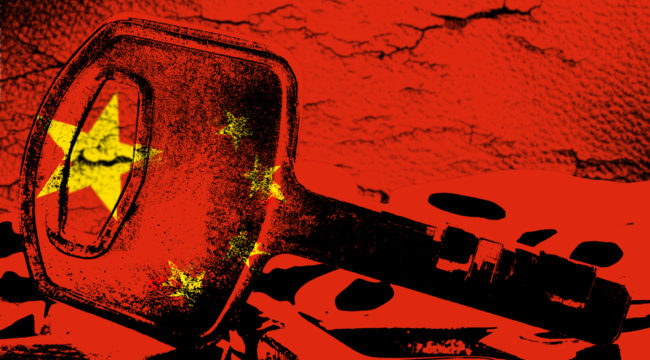 North Korea has for centuries been a hermetically sealed society. In fact, it is known informally as “The Hermit Kingdom.”

Reliable information about the leadership of Kim Jong Un is hard to come by. U.S. and Japanese technical means can track the launch of ballistic missiles and nuclear bomb tests, but these capabilities have to be combined with intelligence about intentions to properly assess the threat.

A highly placed North Korea defector has recently released frightening new information about those intentions. The defector, Thae Yong Ho, says categorically that Kim Jong Un is “desperate in maintaining his rule,” and “he would use his nuclear weapons with ICBM.”

The ICBM is an intercontinental ballistic missile capable of hitting Los Angeles. If armed with a nuclear warhead, it could kill millions of Americans in minutes. North Korea could be just a couple of years away from being able to launch such an attack against the U.S.

The U.S. and North Korea seem to be on a collision course.

The Trump administration has made it clear that this combination of capabilities and intentions will not be tolerated and the U.S. is prepared to use force to destroy those capabilities.

Then the next question is how are they going to stop it?

The Trump administration was hoping that it could steer the North Koreans toward acceptable behavior through the use of financial sanctions. The U.S. pursued this policy with some success during both the Clinton and Bush 43 administrations, but both presidents backed off from sanctions in exchange for vague promises from North Korea that were never honored in full.

The Obama administration did almost nothing to deter North Korea and essentially ignored the issue for eight years in order to appease China. Now the Trump administration is playing the sanctions card again.

North Korean banks have been banned from the global payments system called SWIFT. This is a powerful move, but North Korea can work around it. It can use Chinese banks to make international payments on its behalf without disclosing the name of the real beneficiary to SWIFT.

The solution to this is for the U.S. to impose sanctions on Chinese banks doing business in the U.S. that facilitate North Korean payments. That’s an effective form of sanction, but it risks escalating tensions with China.

And Trump is trying to coax China into cooperating on North Korea’s nuclear program, which I’ll explain further in a moment.

Another way to stop North Korea’s nuclear program is to bomb their nuclear enrichment sites, their stores of fissile material, and their manufacturing sites. These sites are known through intelligence.

But the problem is most of these sites are buried deep under mountains, which are impervious to conventional bombing. The use of nuclear weapons is a possibility, but that would obviously open up another set of questions entirely.

Having said that, there’s an old saying — “If you shoot at the king, don’t miss” — meaning if you’re going to attack an adversary, make sure you finish the job. Don’t leave him in a position where he can come back and attack you.

So the U.S. can’t afford any half measures when it comes to North Korea, and that being the case, the use of lower-yield tactical nuclear weapons to attack deeply buried positions cannot be ruled out.

I should mention here that today the U.S. dropped a MOAB (“Mother of All Bombs”) on a cave complex in Afghanistan.

The MOAB is a fuel-air explosive that uses oxygen from the surrounding air to create a massive explosion. It’s the most powerful bomb we have ever used without ” going nuclear.”

And clearly it was used as “target practice” for use in North Korea.

Of course, any major attack on the scale required to knock out North Korea’s nuclear program risks all-out war, which could result in a protracted campaign of heavy fighting. About 10 years ago, a Pentagon study suggested another Korean War would result in 250,000 American casualties and a million Korean deaths.

Needless to say, Trump would like to avoid that outcome.

And what’s the one country that has influence over North Korea? China.

North Korea is a client state of China.

Only China can exert the type of pressure on North Korea the U.S. needs.

And China doesn’t want a war in Korea either. It would likely lead to the defeat of its buffer state and the reunification of North and South Korea under Seoul’s leadership. That means China would share a border with a strong, close democratic ally of the U.S. That’s China’s worst nightmare.

So last week, Trump tried to enlist President Xi of China is his efforts to dissuade North Korea from continuing down the path to war.

The first thing Trump probably said was “Before we talk about trade or currency what can you do for me about North Korea?”

The implicit message in that question is “Hey China, if you can help with North Korea maybe we’ll go easy on the currency thing and maybe we’ll go a little bit easier on the tariffs. But we need your help on North Korea because the alternative is war, and neither of us want that.”

This is the art of the deal, this is how Trump operates.

And have you heard Trump call China a currency manipulator recently? No, that talk has died down.

That’s a major reversal from his campaign talk.

And Trump admitted one reason he changed his mind was precisely because the accusation could derail negotiations over North Korea.

That may seem like Trump is caving, but Trump actually is in a rather strong bargaining position.

The Chinese economy is in trouble right now, with a massive overhang of debt and large amounts of capital flight out of the country. China doesn’t want to rock the boat even more with a trade war against the U.S.

As my partner Kevin Massengill explained recently, China is much more fragile than most people think. And the continued legitimacy of the Communist Party depends on maintaining a strong economy with high growth and low levels of unemployment.

Avoiding a trade war with the U.S. is therefore a powerful incentive for China to cooperate with Trump on North Korea.

Another source of Trump’s bargaining power has to do with internal Chinese politics, and it’s not something you’ll hear about in the mainstream press.

Trump’s not up for election, but the Chinese president, Xi Jinping, is in a way. Now, China’s technically a communist country, so it’s not like they have free, democratic elections. But they do have Communist Party summits. There’s one coming up in October, so there is a leadership change cycle occurring in China.

Xi doesn’t want to make waves or be responsible for a debilitating trade war with America. Basically, Xi doesn’t want any problems that would undermine his leadership or his position within the party hierarchy. He certainly doesn’t want a war that would ruin China’s client state and put a key U.S. ally on its border. And cooperating with Trump to pressure North Korea to cease its nuclear program is probably Xi’s best option.

So this is another reason why Trump may have a willing dance partner in Xi.

At the end of the day, either North Korea will desist, likely under Chinese pressure, or the U.S. will attack pre-emptively. But North Korea is hard to predict and markets are far too complacent about the prospects of war. War could actually be closer than investors realize. If the shooting starts, by then, it’ll be too late to adjust your portfolio.

The time to move to gold, silver, cash and other hard assets and out of vulnerable equities is now — before the shooting starts.