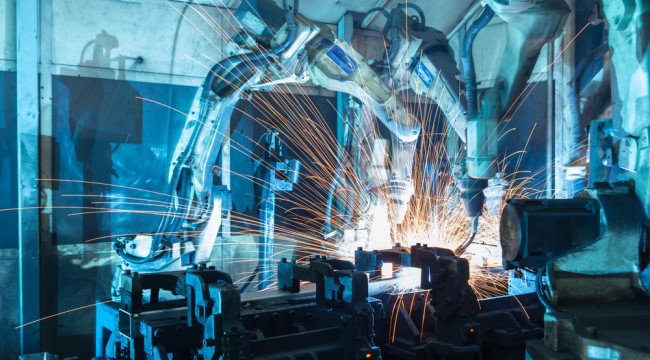 China, Automation, And The Decline In Quality (And Soon In Profits)

Automation poses an insurmountable obstacle to China’s full employment and spells the end of Corporate America’s vast skimming operation based on low wages and zero-regulatory costs in China.

The general decline in the quality of tools and consumer goods predates the emergence of China as the workshop of the world, but the decline has gathered momentum with China’s dominance of manufacturing.

Young people have little to no experience of tools and consumer goods that function for decades; today, everything that isn’t disposable is expected to fail/break within a few years. Whatever doesn’t break must be upgraded or tossed as uncool.

This is partly the result of planned obsolescence: designing the device or appliance to fail or become obsolete within a few years so the consumer has to replace it.

But planned obsolescence is not the entire problem; the quality of goods has declined dramatically due to shoddy manufacturing, poor quality control and low-quality materials. This trend has accelerated as production moved to China.

A few decades ago, things built in the U.S.A. and elsewhere were built to last:not just tools and appliances, but electronics: My 31-Year Old Apple Mac Started Up Fine After 15 Years in a Box (February 28, 2015)

Correspondent Mark G. has been sharing his experience with machine tools that were made in the U.S.A. 60 or 70 years ago that are still going strong.

By his reckoning, table saws sold in the U.S. in the early 1960s–tools that are still working today–were only 10% to 15% more than current table saws (when adjusted for inflation) that are made of plastic and inferior components that won’t last a decade, never mind 60 years.

Here are Mark’s comments on comparing table saws made in the early 1960s and those sold today:

Comparing tablesaws is problematic. The reason is even consumer level American made table saws in 1960 used heavy machined iron castings, structural steel, sheet steel and ZAMAC die castings in all parts. My Magna 10″ table saw is a classic example of that era. Far lower grade plastic and stamped metal contraptions are sold now. Devices of that low a grade simply weren’t on the market before.

Regarding Do-it-yourself: Popular Mechanics had run a 1950s article on building a Delta Unisaw style table saw from plywood and parts machined on a metal lathe. The classified ads of Popular Science and Popular Mechanics were full of DIY shop tool plan sets for $5 or so.

The key take-away is that tools and appliances of the current low quality simply weren’t available in the Made-in-USA era. In a competitive market, i.e. one that isn’t dominated by cartels and quasi-monopolies, competition would drive out low-quality goods designed to fail or made to fail by default.

But with virtually everything made in China now, competition is no longer about quality–it’s only about price. Where’s the competition in quality when everything is made in China? There isn’t any. the quality is low regardless of the brand on the device, tool or appliance.

Five new table saws at 90% of the original cost equals 450% higher life-cycle costs for the poorly made modern tool.

The profits from fabricating low-quality goods flow to the Western owners and buyers, not the Chinese workers. If you watch China Blue, a documentary on a clothing manufacturer in China, you will see a Western buyer squeezing the factory owner to wholesale blue jeans for $4 each that the Western buyer will retail for $40 each. Meanwhile, the factory workers (mostly teenage girls) go months without pay and are penalized if they can’t work crushing slave-labor hours.

The horrendous human costs of working distant factory jobs for low pay is explored in the documentary Last Train Home.

I have explored the dependence of U.S. corporate profits on cheap goods made in China many times: Trade and “Trade War” with China: Who Benefits? (October 5, 2010)

Mark G. compared the modest price reductions in shoddy goods made today and asked where the savings end up. Here is his answer:

It is crystal clear the slight cost reductions were obtained by reducing the material specifications and much corner cutting in the manufacturing processes. Where then did the large additional costs saved by the labor and regulatory arbitrage of the China Trade go?

We both know the answer to this. See soaring income inequality.

A key observation is the Chinese import retail prices are not as cheap as they should be. Equally clearly, improvements in manufacturing technology and automation since the late 1950s should have enabled such production to stay onshore with production cost cuts and a retention or even increase in quality and specifications.

In many instances the 1950s production was coming out of line shaft powered factories.

Instead of manufacturing process modernization the movement to China and offshore has been accompanied by process stagnation and even a reversion to more labor intensive hand work methods.

The rise of cheap automation and robotics dooms mass human labor in China and everywhere else. This poses an insurmountable obstacle to China’s full employment and spells the end of Corporate America’s vast skimming operation based on low wages and zero-regulatory costs in China.

The era of reaping stupendous profits from low-quality goods produced by low-cost labor in a lax anything-goes regulatory system are ending, not as a result of policy changes but as a result of far deeper structural changes.

Anyone thinking China, Inc. and Corporate America will emerge unscathed is living in Fantasyland.