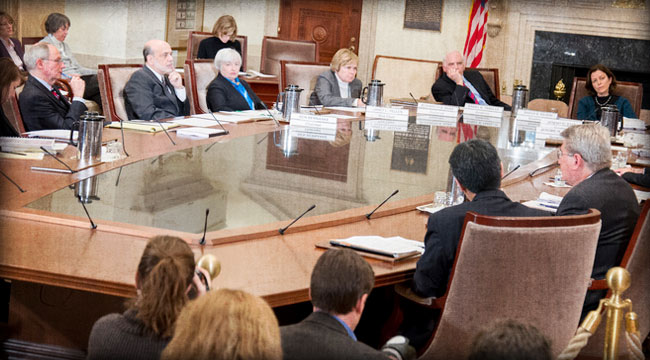 As the scene opens, lights swirl in the eerie black background, crazily careening in a whirling kaleidoscope of disjointed light and dark. In the distance, sirens dimly wail. My face half-hidden in the gloom, I am mindlessly wiping the gleaming barrel of what appears to be a machinegun when I dully look up into the camera lens.

Staring directly into the camera, my narrowed, bloodshot eyes darting from side to side like the frightened little rat that I am, I feverishly say in a hoarse whisper “The Federal Reserve is monetizing the debt! We’re Freaking Doomed (WFD)!”

This is, as is implied in the hysterical fear in my eyes, only the tip of the whole seamy iceberg, as the slimy government has reached new depths of depravity by admitting to actively engaging in manipulating the stock market, the bond market, the housing market, the student loan market, and now the gold and silver markets. Everything. “Supporting” them, as they say, but all financed by the evil Federal Reserve creating mountains of currency and credit to pay for it.

“Buy gold, silver and oil, and if you don’t, it will prove that you are some kind of moron…”

Perhaps this horrible, nightmarish knowledge of widespread official fraud and corruption is causing the look of pained anguish on my face, like that irritated look I get when I stub my pitching wedge, the ball flubs a few inches, or drops into (“plop”) a sand trap, or, worse, zips screaming across the green, as if to mock me, BEFORE heading straight into the sand trap on the OTHER side of the damned green, whereupon I wince at its stinging taunts, shouting, “Shut up! Shut up! Shut up, damn you! I’ll get you for this, you stupid ball!”

Or perhaps my suppressed screaming outrage is causing the bulging of those selfsame narrowed-yet-bloodshot eyes, like when my little one-foot putt, for a double bogey, lips out of the cup, or the way that my fists are clenched in rage like when some laughing lowlife on the adjoining fairway yells out to me, “Hey, moron! You stink! Take some golf lessons! You need ’em!”

Perhaps it is all of these things, or even and/or other worrisome worries, like, oh, I dunno, maybe worrying that your wife is putting poison in your food, and even though she denies it and readily agrees to your demand of switching plates every forkful, you can see her surreptitiously watching your every move, her devious little mind mulling over dark plans to get around your clever ploy to foul her fiendish plot.

Or perhaps the worst part is people coming up to me and saying, “Hey! Aren’t you that Loudmouth Mogambo Moron (LMM) who has been yelling at me to buy gold and silver all this time, and when I didn’t, you yelled at me and told me what a moron I am?”

Proudly I puff out my chest and say, “Yep! That’s me!”

So, as I never tired of saying, woe is me.

I suffer the torment of being Absolutely Freaking Correct (AFC) in that history has shown that gold and silver are the premier investments when governments are acting so fiscally and/or monetarily bizarre. And now the American central bank has created so insanely much currency and credit that everything and everyone is staggeringly debt-besotted to the unbelievable tune of over 400 percent — perhaps as high as 700 percent! — of GDP!

Yet the prices of gold and silver have declined to essentially the cost of production, thanks to the new-found fact of government-approved and government-perpetrated interventions and manipulations, so that random Earthling chumps feel justified in coming up to me and sticking their stupid little faces in my stupid little face and dare — dare! — to criticize me for the losses in their gold holdings, when they should be down (down!) be on their knees (knees!) thanking me (thanking!) for dispensing (dispensing!) Immortal Mogambo Advice (IMA) like “Buy gold, silver and oil, and if you don’t, it will prove that you are some kind of moron, and probably a Keynesian moron, which is the worst kind of moron!”

And speaking of lowlife Keynesian morons, I introduce Janet Yellen, the new chairman of the Federal Reserve, one of the laughably worst of the Keynesian morons, and to whom I have always been, and continue to be, very rude in that way that can only be described as Classic Mogambo Contempt (CMC).

Perhaps Dan Cofall of the eponymous Cofall Letter nailed her the best when he caught her saying that the Federal Reserve “…isn’t just about fighting inflation or monitoring the financial system. It’s about trying to help ordinary households get back on their feet and about creating a labor market where people can feel secure and work and get ahead.”

What?!? The use of the interrobang as punctuation lets you know, right off the bat, that both Junior Mogambo Ranger (JMR) Dan and I were, and remain, completely apoplectic at the absolute preposterousness of the Fed “creating a labor market,” much less one “where people can feel secure and work and get ahead.” How in the hell does a bank DO a thing like that? The Congress has been trying, and failing, to do that for a hundred years! Hahaha!

The only good news in the avalanche of bad news is that gold is, so some say, selling at the cost of production, which is a good news/bad news kind of thing.

It’s bad news for someone holding gold as the price goes down, but good news for those buying it.

The really good news that comes from this is that this can’t keep up for long in the face of relentless, massive Chinese buying, and I’m betting on the apparent historical imperative for people to accumulate gold and silver in tough times. And so people who buy gold and silver right now are going to capitalize — big-time — on the government’s shameless corruption! It’s just a matter of time Whee!

And one of these reapers of financial bonanza will be a guy calling himself Chuck Norris, whose tagline was resplendent with a photo of Chuck Norris, responding to an article at zerohedge.com, who writes, “I’m not that mad gold has been artificially suppressed. It allowed me to accumulate it at better prices. I hope it stays low longer, actually. I’m just gonna buy more!!”

Of course there are those who dispute whether or not this is THE Chuck Norris, he of “Walker, Texas Ranger,” since the REAL Chuck Norris is so superhuman that he can actually karate-kick ingots of lead so hard that they turn INTO gold.

So why would he even bother with accumulating actual gold like us mere mortals, except to show that he’s smart enough to know about the Austrian school of economics and, indeed, the economic history of the world, as well as being a handsome and rich actor, and one helluva rompin’, stompin’, butt-kicking Junior Mogambo Ranger (JMR) kind of guy?

To settle the dispute, we examine Mr. Norris’ punctuation choice, which clearly shows the use of two –count ‘em, two! — exclamation points, which is a secret code whereby all Junior Mogambo Rangers (JMRs) instantly know “this is something important.”

Think about it. And it is.

Ed. Note: No matter how insane things get, there will always be a way to protect yourself. The Mighty Mogambo relies on gold, silver and oil. But there are more ways than that to safeguard your wealth. Sign up for the FREE Daily Reckoning email edition for all the info.