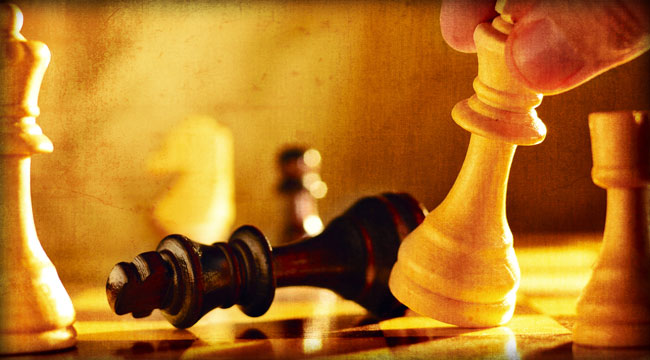 Bringing the Empire of Debt to its Knees

“The relentless credit deluge in America is beyond belief…” Kurt Richebächer bemoaned in 2005. “Credit growth, financial and nonfinancial, in the United States has effectively run riot in the short time since 2000.”

Fast-forward nearly a decade and we have no doubt Kurt would express himself with even greater discontent if he were with us now. From CNN Money this afternoon:

“The CBO projects that under current policies, public debt will reach $21 trillion — or 79% of GDP — by 2024. That would be its highest level in more than 75 years and would leave debt at nearly double its long-term average of 40% of GDP.”

What would Kurt say if he were here today? Probably that a nation, no less than you or I, should earn its money before spending it. And that the U.S. may very well thrive as its public and private debt climbs ever higher… yet it’s probably in spite of indebtedness, not because of it…

…the size of its interest payments is as likely to bring the empire of debt to its knees as anything.

At writing, the national debt sits at $17.3 trillion. The debt limit will need to be raised, according to Treasury Secretary Jacob Lew, lest the U.S. default on some of its obligations. That’s old hat.

What’s more interesting is the interest on the debt. After all, the size of its interest payments is as likely to bring the empire of debt to its knees as anything.

According to the CBO, the U.S. will shell out “only” $233 billion to service its debt this year. That’s a little more than 1% of GDP. At the same time, the federal deficit is set to decline this year and next — to nearly half the amount of 2009’s deficit.

We would humbly posit, however, that digging yourself deeper into a hole isn’t an enviable position… no matter how slowly you dig. This is especially true while interest rates are so low.

What happens when they go back up, as they inevitably will?

The answer, according to the CBO report, is that interest payments will make up the biggest portion of the federal deficit. “By 2024, it will reach $880 billion, or 3.3% of GDP,” reports CNN. That will be 80% of the projected $1.1 trillion deficit a decade from now. That amount rivals what we spend on Medicare alone right now.

It sounds like the end of the road for the ol’ US of A… then again, what do we know? When we produced our film I.O.U.S.A. in 2007, the federal debt was about $9 trillion. Today, it’s nearly double that. If we’ve learned anything, it’s that these things can go on a lot longer than you’d figure. Alas, for all of our uncertainty about the journey’s time frame… the destination is certain.

“For decades,” Dr. Richebächer told us in France two years prior to I.O.U.S.A., “one dollar added to GDP in the United States was tied to $1.40 in additional debt. But all that changed in the 1970s. Since then, the debt-to-GDP growth relationship has skyrocketed. Now for one dollar of additional GDP, there is $4 in additional debt.” 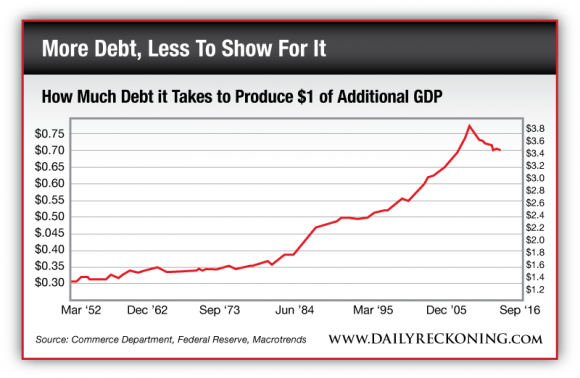 The good doctor might have been engaging in a bit of hyperbole. Comparing the GDP numbers from the Commerce Department with the total credit market debt as reported by the Federal Reserve, it took $3.20 in debt to produce $1 of additional GDP at the time of that interview. But the acceleration since the 1970s is undeniable.

The good news — if that’s what you can call it — is that the upward spiral reversed as the “official” recession ended in mid-2009. We’re now back to $3.44 — the level where it was when Dr. Richebächer died, in August 2007. It’s bad news when you consider that much of that debt has been frittered away on entitlement programs, which have exacerbated the problems they were created to solve.