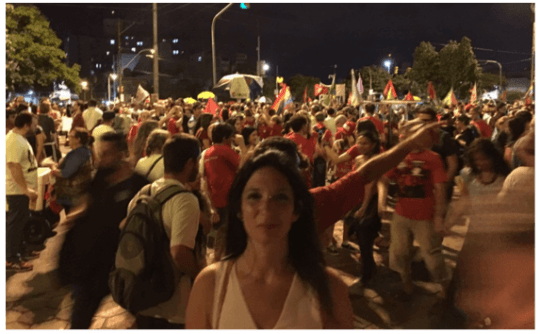 There is no simplifying Brazil’s political or economic situation. Anyone “certain” about the outcome is sure to be proven wrong by events sooner or later.

Corruption is a major issue in Brazil. Corruption might be bipartisan in the United States, and legal in many cases. But in Brazil, it’s epidemic. Eduardo Cunha, the lower house speaker (equivalent to the U.S. speaker of the House of Representatives) has been pushing for President Dilma Rousseff’s impeachment based on corruption charges. The two are bitter political rivals from different parties.

Rousseff, a member of the center-left Workers’ Party, is accused of taking loans from state banks to help close a budget gap, which is illegal under Brazilian law. She denies the allegations.

But Cunha, a member of the Brazilian Democratic Movement Party (PMDB), has himself been fingered by the newly released Panama Papers for corruption. It’s alleged that he accepted millions in bribes from the state-controlled oil company, Petrobras, and stashed the money in offshore Swiss accounts. Petrobras is itself under investigation for corruption for reportedly accepting bribes from construction firms in exchange for contracts.

No one under such a cloud of corruption as Cunha is in a strong position to accuse a sitting, elected president of corruption. Brazil’s new attorney general said as much yesterday, on the grounds there are no legal reasons to impeach her. He said doing so would be to “rip up the constitution.”

The domestic and international implications of Brazil’s internal turmoil go beyond the walls of the Planalto Palace in Brasília, a planned city that contrasts sharply with its far less organized government it contains.

Most national and foreign press outlets have considered Rousseff’s impeachment a foregone conclusion. Last week’s defection of the PMDB was deemed another sign of her pending removal. The PMDB is a “big tent” political party without an overarching political ideology. It’s led by aspiring president Michel Temer. He’s the current vice president, handpicked by Rousseff. He would succeed Rousseff if she’s removed from office.

Waiting in the wings of power, Temer has complained that Rousseff didn’t trust him enough to give him real latitude in her government. She was right. (Score one for female intuition, at least.)

But Rousseff’s impeachment rests on a series of shaky alliances whose loyalties, like Temer’s, cannot be fully trusted.

According to their research, which applies to 442 deputies, 261 deputies are pro-impeachment, 117 are opposed and 44 are undecided or waiting for more party direction. These figures favor Rousseff. Moving forward on impeachment requires 342 votes.

Rousseff denies any wrongdoing. It’s also not clear which law she ostensibly broke, or if even breaking that particular law is an impeachable offense. Her oft-cited “pedaladas fiscais” actions (moving money into the public till from public banks) would be illegal under the Fiscal Responsibility Law.

But it would be illegal only if the money remained in public coffers at the end of the fiscal year. It didn’t. She moved it back to the banks beforehand. This is a questionable practice, but common and not necessarily illegal. Her moves would not be illegal under Public Budget Law, the operating law affecting impeachment, for example.

This is why many anti-impeachment demonstrators are calling the entire escapade a coup, or “golpe,” as well as an anti-democracy, purely politically motivated act.

None of this makes Rousseff a great president, something many people on the left and right agree upon — but for different reasons. She also had to contend with lower commodity prices and softening demand from China, which helped drive Brazil’s export-based economy. But removing her would seem more like a political coup (without the military involvement of Brazil’s 1964 coup) than a matter of justice.

Still, the main conversation in Brazil’s streets is charged with speculation over Rousseff’s survival. Betting against the center-left president is also a pro-market, investor-friendly sport. The market rallies when her prospects worsen. That’s been the case since she ran for her second presidential term in 2014, which she won by a narrow margin. Hence the anger in Brasilia. The current political environment, as the esteemed economist and former Finance Minister Luiz Carlos Bresser-Pereira told me during a private meeting at his São Paulo home, “shows more hate than I have witnessed at any other time during my career.”

The idea of removing a left-wing government saddled with a growing public debt-to-GDP ratio is embraced by the upper, business and new middle class (or upper middle class). They consider Brazil’s current levels of social spending a drain, even if they have helped reduce inequality and provided services that all Brazilians enjoy. Public debt to GDP stands at 66%, up from 54% last year. It’s predicted to grow to 70%, which would still be about 34% lower than the 104% debt-to-GDP ratio of the United States.

Right now university education is free in Brazil. Engineers, economists, lawyers and doctors can earn a top-notch education without incurring the kind of crippling debt students in the U.S. face (and that Bernie Sanders is campaigning to remove). If Rousseff is successfully impeached, tuition subsidies would likely be cut. That’s something students, regardless of their political ideologies, would be hard-pressed to embrace. Health care, which is universal in Brazil, would also be cut, as would subsidies to the poor.

Brazil’s inequality would grow. So would unrest, demonstrations and unemployment. Even if Rousseff is ousted and her successor Michel Temer embarks upon an austerity path — or “bridge to the future” — economic conditions would still falter. That would make his position shakier with the population (only a smattering of whom ever voted for him) and weak within the Machiavellian environment that characterizes Brazil’s government.

Many who favor Rousseff’s impeachment believe it would lead to a more financially liberalized Brazil that would welcome foreign capital with open arms. But without her, political and economic instability might increase given the bitter divide over her potential impeachment. And the anger of Brazilians would likely intensify as the economy weakened.

Public opinion is intense. I participated in a pro-democracy demonstration led by students last Thursday in Porto Alegre, Brazil’s southernmost important city. It drew the largest crowds yet, from a broad sector of society. Many of Rousseff’s supporters at present admit her many weaknesses. These include lying to them, being an ineffective negotiator, lacking charisma, etc. But they are equally skeptical of her political opponents and fearful of the future of the economy under their policies. That said, one of my taxi drivers called Rousseff “that bitch.”

More demonstrations are planned. And the numbers of pro-democracy citizens should rise on the realization that any change of government leadership means the same corruption (or more), just different faces. So deputies in the Brazilian lower house could think twice about their votes. Rousseff could keep her job by a sliver, in that case.

Because it’s Brazil, though, every bit of this situation is in flux. House of Cards is popular here for a reason.

Meanwhile, the only thing that remains certain in Brazil is political and economic uncertainty.