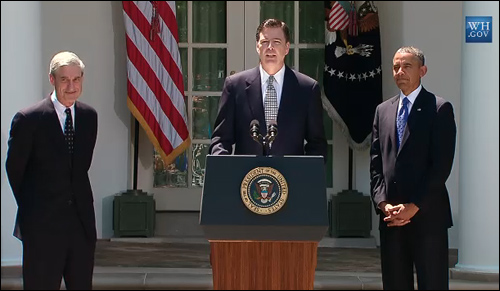 I was beginning to think the Donald’s days as the Great Disrupter were over before he even got started.

So bringing the hammer down on one of the most self-righteous prigs and self-aggrandizing Swamp Creatures to ever inhabit the Imperial City came just in the nick of time.

After all, just in the last week Trump got rolled by the Capitol Hill porkers on the continuing resolution and conned by the GOP leadership on Obamacare repeal, which is already DBA (dead before arrival) in the Senate. At the same time, his one-page Goldman Sachs tax plan has already been laughed off the beltway stage.

At least the long overdue Comey firing — it should have happened on January 20th within minutes of the swearing-in — gives him a chance to fight the most insidious threat of all.

The Democrats and the GOP’s Deep State shills like Senators McCain and Graham have never accepted the outcome of the 2016 election. Through the ill-disguised ruse of the Russian meddling investigation they are, in fact, essentially attempting to re-litigate the election and achieve an unconstitutional recount.

Folks, the Russian interference narrative is a colossal beltway scam. The case against the hapless General Flynn is threadbare, while the charge that certain Trump campaign operatives “colluded” with the Russians to influence the U.S. presidential campaign doesn’t even deserve the dignity of a belly-laugh.

For crying out loud, one of the accused — Carter Page — was a low-level foreign policy “volunteer” during the campaign who knew something about Russia because he had worked their as a glorified Merrill Lynch stock broker 10-years earlier.

His role consisted of ascending the elevator at Trump Tower on a handful of occasions to participate in completely irrelevant “policy” panel gabfests of the type which occur during all campaigns.

But he never even meet Trump in person!

Likewise, another of the accused, Paul Manafort, served as Trump’s campaign manager for just three months before he was sabotaged by leaks about his lobbying stint on the payroll of Ukraine’s former (pro-Russian) President, Viktor Yanukovych. But the case there is just too rich for words.

In the first place, Manafort had been originally hired by Yanukovych way back in 2004 after massive street demonstrations known as the Orange Revolution overturned Yanukovych’s victory in the 2004 presidential race.

Needless to say, that particular episode of “meddling” in the Ukrainian election was funded by Washington via the National Endowment for Democracy (NED), CIA and numerous “non-governmental organizations” (NGO’s) on Uncle Sam’s payroll.

Manafort’s sin was apparently accepting a retainer in September 2014 from the remnants of Yanukovych’s Regions Party to help it prepare for the parliamentary elections the next month.

The irony here is that Manafort was a long-time Washington political operator who I actually knew during my days in the Reagan White House. He was part of the ace lobby firm of Black, Manafort, Stone and Kelly (BMSK).

If the truth be known, it was the lobbying prowess in the corridors of K-Street of BMSK that was as responsible as anyone for Reagan’s huge tax and spending victories on Capitol Hill in 1981.

Moreover, Manafort went on to the kind of bigger and better things that is par for the course in the Imperial City. That is, like the Clintons and hundreds more, he put up a shingle selling advice, influence and access to foreign government and corporations.

But that’s just part and parcel of the corrupt racketeering that is at the heart of the beltway’s fabulous prosperity. It is also what you get when you have a global empire. It’s what they do in the Imperial City.

Indeed, Manafort’s winnings from the pro-Russian side of Ukraine’s Washington-instigated civil war is no different than the $2 million per year Saudi Arabia paid the lobbying firm headed by Clintonista John Podesta and his brother Tony. As a matter of fact, it’s somewhat innocent by comparison.

When it comes to the safety and security of the American homeland, the real threat in the world today is Saudi Arabia, not Russia. It is the tyrannical regime of the former — which rules without elections or laws and beheads hundreds annually for sins such as blasphemy, adultery and drug possession — that has spent billions funding radical jihadists in Syria and elsewhere in the greater middle east.

But the Deep State is in league with Saudi Arabia because it is a massive market for U.S. weapons — some $200 billion of purchases over the last two decade.

By contrast, the only way Putin could invade the shores of New Jersey is in a rowboat because the one aging, smoke-bellowing aircraft carrier that he does posses is bottled up in the eastern Mediterranean on Syria duty.

Stated differently, the War Party desperately needs enemies to keep its global empire funded — even as the American economy buckles under the weight of soaring debt and the Fed’s relentless falsification of financial prices to keep the whole house of cards afloat.

So when the Donald suggested during the campaign that rapprochement with Putin made more sense than Washington’s senseless confrontation with him in Ukraine and Syria — places that are irrelevant to America’s security — the “Russian meddling” narrative was launched to discredit him.

When it culminated in the Obama administration’s content-free report on this matter in December and the subsequent imposition of even more sanctions of Putin cronies, General Flynn apparently did the only thing that was logically possible.

In his now infamous phone conversations with the Russian Ambassador in late December, he undoubtedly urged him that Russia keep its powder dry (i.e. not retaliate) because the White House would soon be occupied by at least a few rational adults.

So what if he didn’t convey the exact tone and content of those conversations to the Vice-President elect?

That kind of constructive and fully appropriate pre-inaugural assurance can’t hold a candle to what has been frequently done by in-coming administrations in the past.

For instance, Ronald Reagan’s emissaries in October 1980 promised the Iranian’s in no uncertain terms that they would get a better deal on January 20th from Ronald Reagan than they could ever hope for from Jimmy Carter.

So doing, of course, they check-mated Carter’s planned October Surprise (i.e. pre-election release of the hostages) and the rest is history.

In a word, the case again Flynn is a complete crock. It is no wonder the Donald finally became so frustrated that he finally remembered his patented phrase, “You’re Fired!”

According to Politico, it was Trump’s decision and his alone that set in motion that great disruption now underway:

President Donald Trump weighed firing his FBI director for more than a week. When he finally pulled the trigger Tuesday afternoon, he didn’t call James Comey. He sent his longtime private security guard to deliver the termination letter in a manila folder to FBI headquarters.

Trump had grown angry with the Russia investigation — particularly Comey admitting in front of the Senate that the FBI was investigating his campaign — and that the FBI director wouldn’t support his claims that President Barack Obama had tapped his phones in Trump Tower.

All true enough. But firing Comey is a Nixon-scale event, and it means Washington will be embroiled in vicious partisanship and endless investigations are far as the eye can see.

You can forget about the giant Trump tax cut and Fiscal Stimulus that is apparently still “priced-in” to a market that has now become just plain stupid in its recklessness.

Humpty Dumpty’s set up for a very big fall. And soon.