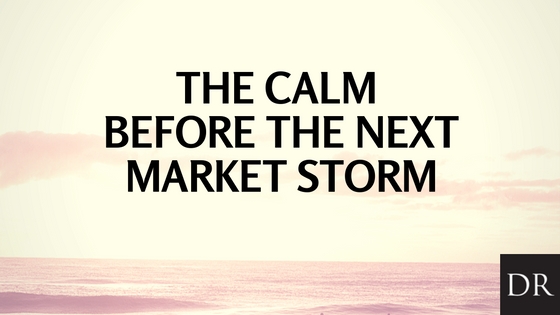 After a September scare, a calm runs through the markets again. An eerie calm. A calm that can’t last.

The Dow tumbled 200 points yesterday, setting off a minor wave of volatility as measured by the CBOE Volatility Index — the VIX. But it’s still not much in the scheme of last year – or, for that matter, a month ago… 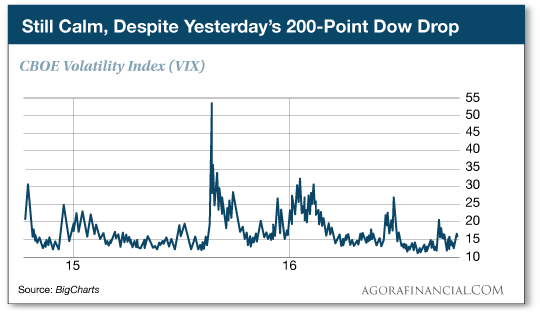 “The VIX trades roughly in the range of 0–100,” explains Jim Rickards, “although, as a practical matter, it never reaches either extreme.

“When you trade volatility,” Jim goes on, “you are not betting on the direction of markets — you are betting on whether or not extreme moves are in store.

“Those extreme moves could be up or down for a variety of market measures. When you have a ‘long’ position in volatility, you don’t care if a certain market goes up or down, you just care that markets are jumpy and moving in some unexpected or extreme way.

“When markets are already nervous, the price of volatility (reflected in the index level) skyrockets. The way to profit is to buy volatility when it’s cheap and then reap rewards when volatility suddenly skyrockets due to the occurrence of a market or political shock.”

Which is what the market is teeing up right now: Jim calls it “one of the most compelling investment opportunities we’ve ever come across.”

The VIX sits at low levels “in a world waiting to explode with volatility due to unstable currency exchange rates, bank liquidity crises, geopolitical uncertainty and a wild U.S. election cycle.

“One or more of these potential sources of instability are ready to pop up on the markets like a tightly jammed jack-in-the-box when someone unlocks the lid. The key to profits is to understand how to use volatility as a trading strategy. If you act now, you could reap huge rewards in a matter of weeks.”

With that in mind, let’s examine the chart above in a little more depth.

Yesterday’s bump up in volatility has stretched into today, and the VIX rests near 16. That’s still 11% lower than the most recent peak a month ago.

“That mid-September peak,” Jim reminds us, “was associated with market uncertainty involving Deutsche Bank liquidity problems; the Clinton health scare of Sept. 11; uncertainty in the run-up to the Fed meeting on Sept. 21; and a Trump surge prior to the first presidential debate, on Sept. 26.”

But even that spike last month is child’s play compared with other episodes in recent market history, Jim points out…

Now think for a moment: How likely is it the VIX won’t spike to last June’s levels before the end of the year?

Consider all the turmoil of recent weeks: The “flash crash” in the British pound last Friday. The looming threat to the financial system posed by Deutsche Bank. The election campaign, likely to deliver a few more surprises even if David Stockman is right and Hillary Clinton has it sewn up. And the threat of a new cold war between the United States and Russia turning hot.

The setup in the VIX right now is an “asymmetric” trade — Jim’s favorite kind. “VIX is unlikely to go much lower, because it is already at an unusually low level relative to its longer-term behavior. Conversely, the VIX could easily spike based on one or more new shocks, or shocks from already known problems like Deutsche Bank that are dormant but could re-emerge at any moment.

“In summary, the odds of losing money on a properly constructed volatility trade are low, and the odds of making huge gains are high.”