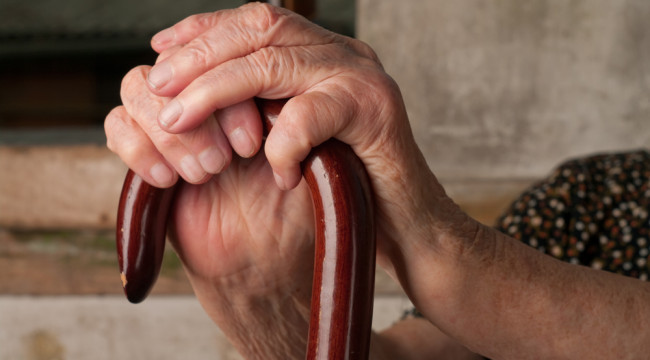 What if the biggest financial innovation of the 21st century proved to be the third and final blow to the baby boomers’ retirement — the coup de grace after the dot-com crash and the Panic of 2008?

Sorry to clobber you right out of the gate today with such a bold proposition. But this is something that’s been building for nearly six months… and only now is the scope of the threat becoming too obvious to ignore.

To be clear: We’re not talking about some exotic instrument you’ve never heard of… or a new type of derivatives contract traded only among high-finance types. We’re talking about something that might well sit in one or more of your investment accounts right now.

Our story begins the morning of Monday, Aug. 24, 2015. It was like many days in recent months, with traders freaking out over China and Federal Reserve policy. But on this day, the Dow industrials collapsed nearly 1,100 points in the first five minutes of trading.

In the scheme of things, it was no big deal. At its nadir that day, the Dow stood at 15,370. At no time since has the index traded that low.

The S&P 500, meanwhile, tumbled 5.3% that morning. But look what happened to the iShares Core S&P 500 ETF (IVV). This ETF, which hypothetically tracks the S&P 500, crashed 26% that morning… as seen on this one-year chart that includes the intraday action… 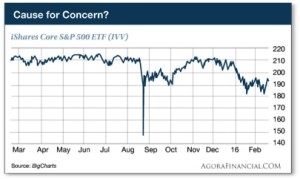 In theory, this isn’t supposed to happen. Exchange-traded funds are supposed to trade in lock step with their underlying indexes, with little if any tracking error.

But in practice, these flash crashes happened last Aug. 24 to ETFs from all the major ETF names — iShares, SPDR, Vanguard, PowerShares. Trading was halted on 85 exchange-traded products before the markets righted themselves.

The elite financial media shrugged off this event as a freak occurrence, an anomaly… even as it assured us that Wall Street’s best and brightest were hard at work to make sure it never happened again. Heh…

Looking at the chart above — and there are dozens of others like it — you could be forgiven for wondering whether something deeper is wrong. But what would it be? And is it possible that one day these ETFs tank again… and that time they don’t come back?

Only in the last six weeks has a credible explanation emerged for what happened last Aug. 24.

And the man who’s come forward with that credible explanation says yes — not only is it possible these ETFs will sink and not recover, it’s inevitable.

“ETFs are a creature of bubble finance that would hardly exist, if at all, in an honest free market,” says David Stockman.

David, you might recall, is the veteran of both Washington and Wall Street who’s calling BS on the “bubble finance” distortions wrought by politicians, central bankers and financiers these last 20 years.

ETFs are among those distortions… first coming on the scene in 1993 and taking off in earnest when Vanguard entered the fray in 2001. Today, ETFs own some $3 trillion in assets.

In contrast, ETFs “are just a vehicle for momentum-based speculation. The punters and robo-machines that move in and out of them (often in lightning-fast trades) have no clue whatsoever as to the fundamentals of the underlying companies. They also have no idea whether or not the valuation metrics implicit in the ETF as a whole are even remotely justifiable or even sensible.”

So while millions of retail investors hold ETFs for the long term — maybe you? — they’re dwarfed by day traders and computer algorithms looking for a fast buck.

And that sets the stage for events like last Aug. 24 — when the ETFs veer far away from their underlying indexes.

“The underlying basket of stocks is frequently far less liquid than the ETF itself,” David goes on.

“Since the latter can be sold at any moment the market is open, a sharp stock market plunge can force the ETF’s market maker to dump the underlying stocks. They do so at deep discounts in order to generate cash to redeem ETF shares for which there are no bids.

“This is especially true because in a falling market, the robo-machines trade out of ETFs even faster than individual stocks. This dynamic, in turn, has the potential to generate a doomsday loop in which ETF selling begets more selling as market makers frantically attempt to meet redemptions.”

“When the stock market breaks for the third time this century, the ETFs will function as a giant oil slick,” David concludes.

“They will accelerate the market’s decline because the momentum traders who own them will hit the sell button first and not even worry about questions later.”

As you might be aware, David has recently come out of retirement to partner with Agora Financial — developing a one-of-a-kind investment strategy to seize on the end of the “bubble finance” era.

To date, the results have been spectacular — four closed positions good for an average gain of 88% in an average holding time of 67 days. The average open position is up 55% in 40 days.

Already in 2016, David recommended a play based on the looming trouble he sees in ETFs. It was good for a 58% gain in only two weeks.

But there will be more opportunities where that came from. To help you get ready, David is hosting a live online workshop next week. He’ll tell you much more about the inevitable implosion in ETFs… and how you can transform this implosion into 300% gains over the next 14 months.

We’ve scheduled this event next Wednesday, Feb. 24, at 7:00 p.m. EST. It won’t cost you a thing to look in. Just RSVP us at this link with your email and we’ll make sure to save you a spot.