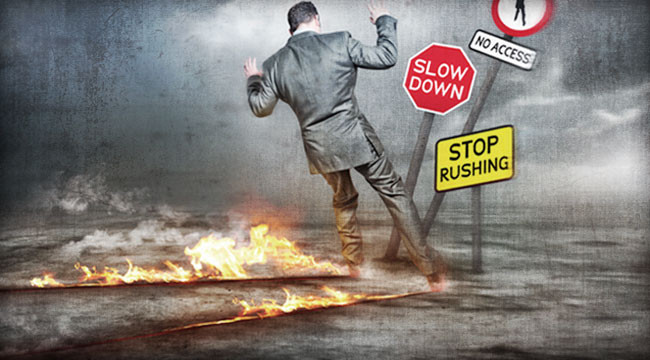 [This post on Here’s Why Bogus CPI Data Won’t Slow Fed Tightening is from Lee Adler. To find out more about his work – visit Wall Street Examiner.]

One of my other favorite axioms is that bull markets (or “bubbles,” if you please) top out when the news is good, not when everything is already going to hell. Because when the news is good is when central banks pull the punchbowl. They look at the data and see the evidence of asset inflation and dangerous bubbles across many asset classes. And they finally say, “OK, I think you’ve had enough!”

Then, given their inflated notion of their own omnipotence, they set about to engineer a soft landing. The desired soft landing inevitably turns into a vicious bear market that threatens to spiral out of control. The central bankers panic and start pumping money like mad, and if they’re lucky, the markets rebound.

This has been the market cycle ever since modern central banks were formed. Along the way central bankers learned that they could rig the markets to extend the bull phases by printing lots of money. But they also learned that not only doesn’t that spur economic growth, it may even retard healthy economic expansion.

So far, they have always been lucky.

One of these days, Alice, they won’t be.

Last week we got the news on various measures of the prices of consumption goods, led by the consumer price index (CPI). Wall Street, economists, and the financial infomercial media like to pretend that CPI measures inflation. We know that it only measures a tiny arbitrary subset of consumption goods, and a completely phony, made up lie on the cost of housing.

Despite that fact that it does not measure general inflation and doesn’t even accurately measure the typical household cost of living, virtually everyone in the investment business pays homage to it. Then they compare it to the Fed’s “inflation target.” Never mind that everybody excludes asset prices and home prices. The “inflation” target only applies to retail goods and services.

Then everyone waits with bated breath to see whether the number is above or below the Fed’s “inflation” target of 2%. If around or above that level, the conclusion is that the Fed will raise interest rates, which everyone assumes is bearish. Or if the number is below 2%, the Fed won’t raise rates, and that’s supposed to be bullish.

The whole spectacle is absurd because the underlying assumptions are false.

“Raising rates” using the tools the Fed currently pretends to use, is not the same as tightening credit. Increasing the interest rate on excess reserves only pays the banks a bigger subsidy. Tightening credit would necessarily involve shrinking the Fed’s balance sheet. They haven’t done it yet, but they’re talking about it starting soon. CPI above 2% will encourage them to do that.

When I read the FOMC meeting minutes, and see what Fed governors and district presidents are saying, reading between the lines I see something different that what the crowd expects.

Fedheads have made enough offhand remarks about asset prices that I think this is the Fed’s real concern, not whether CPI or PCE are above or below 2%. I’ll give the Fed credit to the extent that I think that they’re smart enough to recognize asset bubbles (too late, yes) and to recognize how dangerous they are to the financial system.

The Fed probably also knows that the popular measures of consumer goods inflation have been persistently understating the true cost of living, which has been rising significantly faster than headline and core CPI. Alternative measures that use accurate housing prices show that “inflation” may be as much as double what the CPI shows.

Therefore it’s my guess that the Fed is now hell bent on tightening monetary conditions by ultimately beginning to shrink its balance sheet late this year or early next year, regardless of what the CPI does.

Meanwhile, the Wall Street Journal’s slant, is that, yeah, inflation is above target, but it won’t stay there for long.

The consumer-price index, which measures what Americans pay for everything from radishes to rent, advanced a seasonally adjusted 0.2% in April from the prior month, the Labor Department said Friday. Excluding the often volatile categories of food and energy, so-called core prices rose just 0.1% from March.

So the message then is, “Inflation is low. The Fed won’t tighten. All is well. Rest easy in the moderation of the long term bull market.”

But the facts tell us otherwise. The CPI actually rose 0.3% month to month, Not Seasonally Adjusted (NSA). Why a seasonal adjustment (SA) would have resulted in a gain of only 0.2% between March and April is just one of those mysterious things that make statisticians who come up with stuff seem smart. That’s also why economists like SA data, as opposed to actual data.  I frankly don’t see much evidence of consistent seasonal effects on most months of consumer price data. And a 0.3% gain in April is wholly unremarkable. It’s right in line with past patterns.

The year to year increase in the actual, NSA data was 2.2%. That was within the range of the annual rate of increase of the previous 4 months, which was between 2.1% and 2.7%.  The April year to year number was above the Fed’s target, but the Fed pretends to be targeting the core PCE rather than headline CPI. Core PCE has been running below target.

None of these measures include an accurate rendering of housing prices, instead relying on the IOER measure, or a similar measure based on tenant surveys of contract rent, not market rent. Contract rent typically rises much more slowly than market rent in hot housing markets such as the one we have been in since prices started accelerating in 2012.

The Flyover CPI measures consumer prices including actual home prices, and with slightly greater weight given to medical costs and energy. This is a more accurate representation of actual cost of living increases experienced by middle income families in the American heartland, excluding the big coastal glamour capitals. The most recent data we have for this index is through February. It was running at an annual rate near 5% in February, as home price inflation once again heats up toward rates of 7-8% a year. 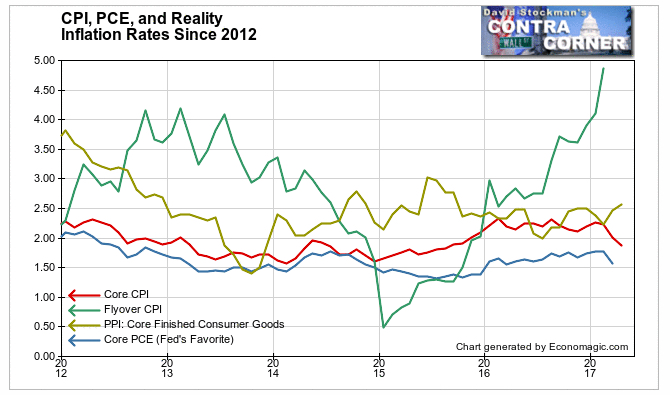 The Fed is well aware that the measures that it purportedly follows understate consumer inflation. It is fully aware that we have asset bubbles, and that those bubbles have grown to monstrous proportions.

Unfortunately it has come to these epiphanies far too late to do anything constructive about them. It should have tightened monetary conditions years ago. It should never have loosened to the degree it did. These blunders are a continuation of the Fed history of serial long term blunders.

Now, the past is prologue again, and the Fed must make another of its foreordained blunders. That is tightening in the face of out of control financial instability. The longer it waits, the worse the punishment will be when it’s finally administered.

Or maybe, the markets will just do the job for them, first. Today was a warning shot.  A massive crisis of confidence could trigger a crash that would force the Fed to start buying assets again. This time, it might not work.