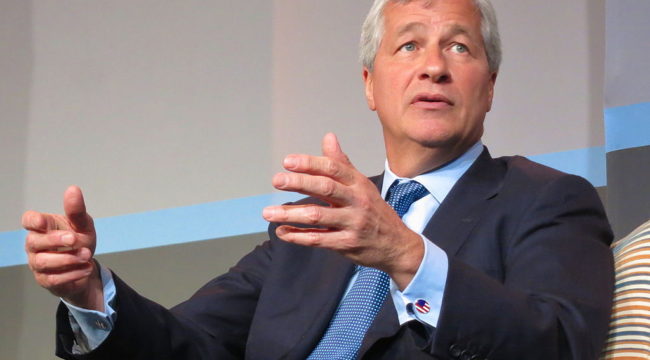 Institutional ownership of bitcoin is in the very early stages.

If I had a bitcoin for every time some pundit declared bitcoin is a bubble, I’d be a billionaire. There are three problems with opining that bitcoin and cryptocurrencies are bubblicious:

He came out recently and called Bitcoin a fraud.

Well, here’s a quick question for you, Mr. Dimon: which words/phrases are associated with you and your employer, J.P. Morgan?

Jamie, if you answered “all of them,” you’re correct.

The only reason you have a soapbox from which you can bloviate is the Federal Reserve saved you and your looting machine (bank) from well-deserved oblivion in 2008-09. That, and the unprecedented, coordinated campaign by global central banks to buy trillions of dollars of bonds and stocks.

Compare the return for an investor who “bought the dip” in J.P. Morgan stock (JPM) at $57 in early February 2016 and the investor who bought bitcoin (BTC) at $376 at the same time.

Some initial coin offerings have made gains that make this mere 10-bagger look like small change.

And a lot of institutional fund managers are angry that they’ve missed out.

This might look like a speculative side-game, but for institutional money managers, it’s getting serious. As we all know, it’s becoming increasingly difficult to manage money such that the returns on the managed money exceed the return of an S&P 500 index fund.

If a passive index fund does better over five years than an actively managed fund, then what the heck are we paying the fund managers big bucks for?

This is a question that occurs to everyone with money in a pension fund, mutual fund, insurance company, etc. Why are we paying these guys and gals annual salaries of $250,000 plus bonuses if they’re missing out on the big winners like bitcoin?

Let’s stipulate up front that no institutional money manager can speculate in the cryptocurrency equivalents of penny stocks, i.e. ICOs (initial coin offerings). The risk management rules of serious money funds preclude this sort of rampant speculation, no matter how potentially lucrative.

But bitcoin is different. It’s been around the longest, and has survived all the slings and arrows of outrageous fortune tossed at it.

Bitcoin is tailor-made for institutional ownership. While it is inherently volatile, it is stable and transparent; there is no “insider trading” or financial trickery (such as bogus financial statements) to be wary of. Unlike many other investment vehicles, it’s highly liquid.

Once exchange-traded funds (ETFs) based on direct ownership of BTC are widely available, this opens the door wider to both institutional and mom-and-pop investors.

All of this puts pressure on institutional money managers to buy some bitcoin so they don’t look like they missed the investment vehicle of the decade. Never mind when you bought it, or at what price; better to get in now before the price jumps even higher. Going forward, it will be this simple: either you own bitcoin or you’re out of a job.

This is the same reason virtually every institutional money fund owns Apple (AAPL) — if you don’t own Apple, then you missed out on the decade’s greatest investment story. So if your fund lags index funds, and has no ownership of Apple, Facebook, Netflix, Amazon and Tesla — here’s your pink slip, buddy — you blew it.

The point is institutional ownership of bitcoin is in the very early stages. As bitcoin continues to advance, institutional money managers will be forced to buy in, just to avoid the fate of those who failed to buy Apple.

Money managers buying now at $4,500 will look like geniuses when it hits $10,000. And everybody who dismissed BTC as a bubble at $5,000 will face a bleak choice — either get some bitcoin in the portfolio or prepare for a pink slip.

When the institutional herd starts running, it’s best not to get trampled.

So back to Jamie Dimon: if you want us to listen to your incoherent ranting about bitcoin as “financial genius,” first predict the timing of the crash that takes down your parasitic bank.

If you pull that off with amazing accuracy, then maybe we’ll pay attention to your “prediction” about bitcoin.