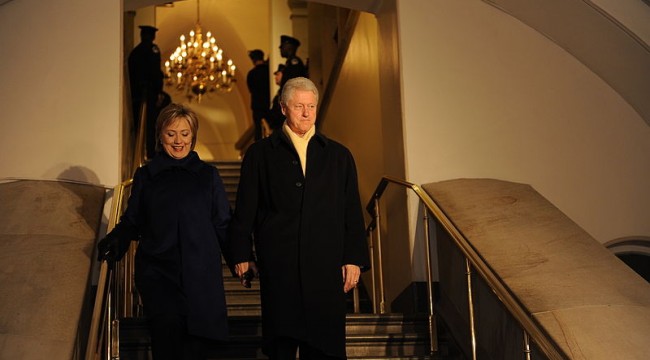 Billary Clinton and the Perfection of Consumerist Narcissism

I don’t think it’s coincidence that Bill Clinton’s presidency and Christopher Lasch’s landmark analysis The Culture of Narcissism: American Life in an Age of Diminishing Expectations both date from the same year, 1993.

Clinton solidified the modern presidency’s narcissistic obsession with public approval (the political equivalent of “likes” on Facebook) and the exploitation of that popularity for maximum self-enrichment.

The relentless charm offensive and rapacious exploitation of Billary’s proximity to power has yielded a fortune once reserved for tech titans and hedge fund superstars:

Hillary And Bill Clinton Report $139.1 Million In Taxable Income Since 2007

This sum doesn’t include the tens of millions vacuumed up by the Clinton foundation machine, which distributes tribute to further the interests of the Clinton dynasty under the convenient guise of charity.

This is not to single the Clintons out as bad eggs in an exemplary system; it is to identify them as the stars of a thoroughly corrupt system. The Clintons did not make the political system; they have simply proven themselves the most adept at milking it for fame and fortune.

If the system encourages raking in millions, why not rake in millions? You’d be crazy not to. If we could skim $250,000 for a short speech on the travails of ageing Lotharios (or whatever else we wanted to blather on about), would we turn it down?

In this system, sincerity is what you spray-paint on whatever position that polls identify as popular. Hillary is especially adept at changing her accent to align with what her machine has identified as the dominant class in the audience of the moment.

Presidents in the culture of narcissism are caretakers, not leaders. When bank profits are at risk, the president OKs deregulation or bailouts to insure bank profits are unfettered by capitalism.

If the National Security State needs approval for more drone strikes, the president duly approves whatever the Deep State wants.

The party affiliation of the president makes little difference. The agenda remains the same: further state centralization of political and financial power, and expanding leverage of private wealth over this increasingly centralized power.

A citizenry reduced to narcissistic consumerism is unable to resist centralization and the financial oligarchy that controls the central bank/state machinery.

Lasch saw the rise of consumerism and the resulting rootless cosmopolitanism of the modern economy as the wellsprings of our culture of narcissism.

For Lasch, the relentless commoditization of life disrupted the natural social relations of family, social reciprocity and the workplace, depriving individuals of these sources of meaning and replacing them with an empty consumerism that worshipped fame and celebrity.

The marketplace’s commoditization of everyday life–both parents working all day for corporations so they could afford corporate childcare, for example–created two alienating dynamics: a narcissistic personality crippled by a fragile sense of self that sought solace in consumerist identifiers ( wearing the right brands, etc.) and a therapeutic mindset that saw alienation not as the consequence of large-scale, centralized commoditization and financialization but as individual issues to be addressed with self-help and pop psychology.

In Lasch’s view, both of these dynamics ignored the loss of authenticity that resulted from the commoditization not just of production but of every aspect of everyday life.

In this sense, Lasch’s social analysis is an extension of Marx’s original insight into the alienating dynamics of commoditized wage-work, in which workers and their work were both interchangeable.

Lasch’s analysis brings us to the source of modern alienation: it’s not just employees who are interchangeable–employers are equally interchangeable.The interchangeability of work, employees, employers, products and services is the key characteristic of commoditization.

Those closest to the sources of money and power reap the gains because proximity to power is the key point of leverage in a system of narcissistic self-absorption and commoditization.

The Clintons’ phony sincerity, shameless self-aggrandizement and voracious appetite for cash offered in exchange for political favors is the perfection of a system in which authenticity has been commoditized and all social relations have been reduced to financial transactions.

In this perfection of consumerist narcissism, the only goal is maximizing private gain by whatever means are available.