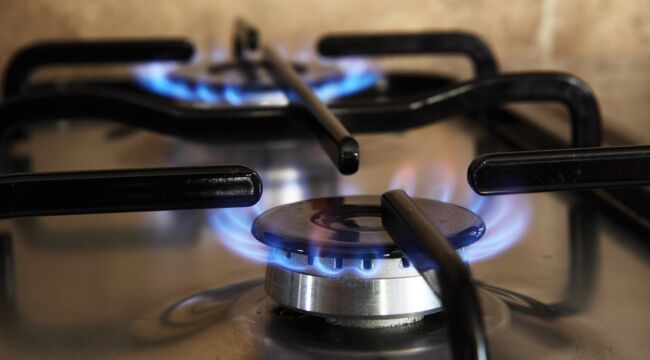 I’ve been warning my readers about Biden Bucks coming soon as a threat to your physical cash and your freedoms.

I’ve also written frequently about the false science of climate change and the extreme climate alarmism embraced by global elites and their flunky pseudo-scientist collaborators. They’re meeting right now in Davos, by the way, figuring out new ways to try to run your life.

The Biden administration itself has a long history of using this alarmism to try to control your life. Their most recent offense might just be their worst…

They’re considering a nationwide ban on gas stoves — citing the harmful pollutants released by the appliances, according to a recent report. The report claims that gas stoves are linked to an increased risk of respiratory illness, including asthma in children.

Groups including the American Chemical Society and New York University Law School’s Institute for Policy Integrity found that gas stoves — which are used in about 40% of U.S. homes — emit pollutants like nitrogen dioxide, carbon monoxide and fine matter at levels deemed unsafe by the Environmental Protection Agency and World Health Organization.

“This is a hidden hazard,” Consumer Product Safety Commission Commissioner Richard Trumka Jr., told the outlet. “Any option is on the table. Products that can’t be made safe can be banned.”

In addition to 40% of homes, 76% of restaurants use gas stoves. That’s a lot of gas stoves to ban!

Just Another Attack on Fossil Fuels?

Incidentally, or not, the research was led by RMI, an organization that pushes for carbon-free buildings and that “works to transform global energy systems across the real economy.”

So there’s an agenda there. That itself doesn’t necessarily disqualify the research, but it should give you pause.

Critics maintain that the studies are flawed, and that the pollutants cited are the byproducts of cooking itself, whatever the energy source. In other words, the studies falsely isolate gas stoves when in reality, it’s cooking itself that releases the contaminants.

It’s just another attack on fossil fuels to promote the green agenda.

Regardless, the CPSC is mulling the action after these studies showed emissions from the devices can cause health and respiratory problems, Bloomberg reported.

Biden has claimed that he’s not in favor of a ban. But he is allowing the unelected bureaucrats at the U.S. Consumer Product Safety Commission to tell you how to live your life.

It CAN Happen Here

Now you might say that they can never get away with it. There’s simply too much public opposition. All I can say is think again.

These regulators are unbelievably powerful. They have every intention of carrying out their wishes and are enjoying every minute of it. They don’t answer to Congress and scoff at your protests. They believe they alone are in charge and you have nothing to say about it.

What’s to stop them from banning sales of new gas stoves, while mandating that all existing gas stoves be replaced within the next decade?

So don’t think it can’t happen. It can.

Think of all the things they’ve already wrecked. Look around at your household appliances. Energy use and water restrictions have degraded washing machines, refrigerators, dishwashers, showers, toilets, clothes dryers, steamers and irons, dishwashers, freezers and so much more.

So what makes you think your stove is exempt?

The bottom line is the Biden administration and the unelected bureaucrats they enable are out of control. I’ve already told you how they want to control your life using Biden Bucks. That’s the term I use in reference to the coming digital dollar — the central bank digital currency.

The administration is moving forward with Biden Bucks, their government-backed digital currency.

I fear Biden Bucks will become the basis of a new system of full citizen control through the financial system, something akin to China’s social credit system that controls the entire population based on political loyalty.

These kinds of “social credit” systems and political suppression will be easy to conduct when “Biden Bucks” are completely rolled out in the U.S.

This new currency will allow for total control of all American citizens. Because every “digital dollar” will be programmed by the government. That means they will be able to “turn on or off” your money at will.

In a country of Biden Bucks, the government will know every purchase you make, every transaction you conduct and even your physical whereabouts at the point of purchase.

It’s a short step from there to negative interest rates, account freezes, tax withholding from your account and even putting you under FBI investigation if you vote for the wrong candidate or give donations to the wrong political party.

The purely digital dollar could potentially limit you to purchasing certain things that are in line with their progressive/green agenda.

Taking away your ability to cook with a gas stove is just another way for them to control you. But what might gas stoves specifically have to do with “Biden Bucks”?

At first, the answer would seem to be nothing. They have nothing to do with each other. But with Biden Bucks, you can only spend your money on socially approved or politically approved purchases.

And if you don’t spend your money on politically approved purchases, you can expect retribution.

“Hey citizen, I see you’re still using a gas stove. But we’ve determined that gas stoves are unsafe. You didn’t listen. Well, guess what? We just lowered your social credit score. Good luck getting that loan you wanted. And you can forget about that new job you just applied for.”

A Recipe for Unlimited State Power

That’s how these things can play out under Biden Bucks, and how they can relate to something so seemingly disconnected as gas stoves.

Under Biden Bucks, there’s really no limit to the state’s interference in your life.

Even The Economist has announced the rise of government-backed digital currencies, warning they will “shift power from individuals to the state.”

The Economist isn’t known for engaging in conspiracy theories.

Thankfully, people are fighting back, including elected officials. As Rep. Gary Palmer argues:

“Unelected bureaucrats should not have the type of power to even consider such an action. It is time to rein in the Biden administration and their continual desire to control Americans’ lives and decisions.”

The CPSC backed off the idea of banning gas stoves following swift criticism like this. But that doesn’t necessarily mean they’ll give up. They’ll just go about it more quietly.