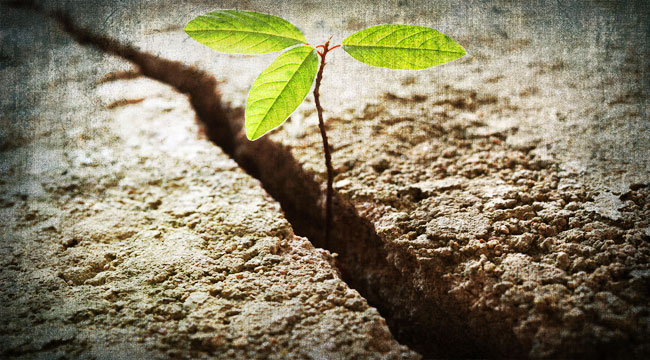 Banking Profits in a Beaten Down Market

“Banking has been around in one form or another since ancient times,” PL Capital’s latest shareholder letter notes. “It’s not obscenely profitable,” say the authors, but it is persistently so.

For example, 90% of all banks were profitable in 2012. And even in the gloomy times of 2008 and 2009, 77% and 70% of all banks still managed profits. A little application of the stock picker’s art and you can go far in this industry. PL Capital’s Financial Edge Fund — which invests only in bank stocks — was up 40% last year.

What follows is another look at banks with some notes from PL Capital. The firm — run by Rich Lashley, John Palmer and Curt Thompson — was the subject of one of my Capital & Crisis letters back in November. Readers may remember, they made an eloquent case for bank stocks.

The case begins, I think, with that rugged profitability. The return on equity for the whole industry in 2012 was about 9%. “While this is below the 12% ROE level enjoyed pre-crisis,” the letter continues, “it is still a respectable return which can create wealth for shareholders over time, particularly when many bank stocks still sell for below tangible book value.”

Remember, tangible book value per share is a handy measure of value. The stocks price off their price-to-tangible book ratios. It is a rare and special season when bank stocks trade below 1-to-1, as many do today. Hence, banking is still an area that I am actively mining for good deals.

PL Capital points to a couple of other eyebrow-raising facts. For one thing, do not underestimate the ability of banks to cash in on technology to do more with less. Consider this brief tale of the tape: 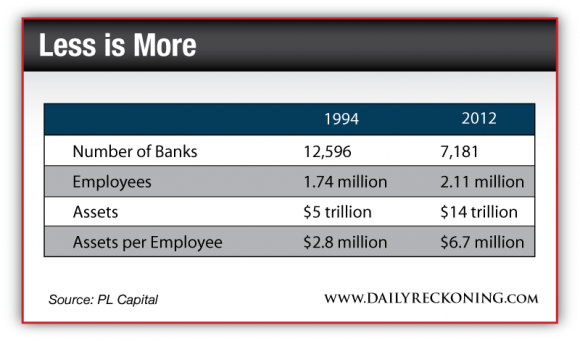 Banks manage almost 2.5 times more assets per employee than they did in ’94. These trends will only continue as we move more toward a “cashless society.” Note too the shrinking number of banks. This speaks to another big trend: consolidation.

“The regulators have made it clear that they want to see fewer small and midsized banks (less than say $1 billion in assets),” the PL trio write. The regulators think these banks do not have what it takes to keep on top of all the roles — new and old — that they want banks to do. The laundry list includes complying with the Patriot Act, the Bank Secrecy Act and many more rules. The result? There will be fewer banks (i.e., more mergers and acquisitions).

There is good economic rationale for this, too. PL says that the acquiring banks often take out 25-50% of the acquired bank’s overhead costs. So if we are in a slow-growth to no-growth economy, how do you grow? One way is you start to buy other banks — especially when they are trading cheaply. The incentive is there, like a carrot dangling in front of a donkey.

Moreover, the acquisition game is an example of the proverbial win-win. The small bank investors get a bump in stock price as the deal goes off as a premium. And the acquiring bank gets to hack away at those excess costs and create value for its shareholders.

Beyond acquisitions, banks have other ways to win. They can grow book value per share. And they can grow it even faster if they buy back stock, as many have done. Time is on your side here. At some point, bank valuations will recover. That’s how markets work.

In other words, there is more upside to come. The year 2013 should be a good one for bank stocks. It is one of the few areas of the market where the bargains are clear and relatively plentiful. Downside is low when you acquire profitable banks at less than tangible book value.

I often run into skepticism when I make the above case — usually a sign that I’m onto something. (It’s always the ideas that everybody loves that get in trouble.) I was in Baltimore recently for an editorial meeting with my fellow editors of sister Agora publications. Even there, I met mostly with apathy — if not hostility. At one point, I said, trying to set the scene, “Imagine you have a bank…” I was interrupted with “That’s the problem. It’s a bank.”

But I ask you: Is this a rational position to take? To write off an entire industry because of bad things that happened to it five years ago? Are we interested in making money? Or do we want to assemble prettily wrapped portfolios of stuff other people will like?

P.S. I love being the contrarian in the room. Buy what is unloved is my mantra. In today’s market, that means buy banks. As I say, I continue to hunt in this area, and I expect to turn up another idea here. In the meantime, take a moment to sign up for the Daily Reckoning email. It’s designed to provide you with the kind valuable insight you’ll need to hunt for own overlooked investments, in all sorts of asset classes, every single day. Sign up for free, right here.