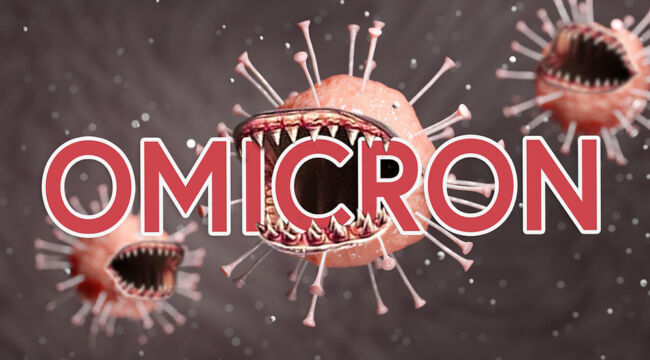 In fact, daily caseloads are now higher than they were in the spring of 2020. As always, the virus goes where it wants to go.

The latest variant, the Omicron variant, is a good news, bad news situation.

The bad news is in the headlines every day. Omicron is highly contagious. It’s racing through communities and major cities with amazing speed. That should come as no surprise.

As I’ve explained for over a year, the vaccines don’t help because they don’t stop people from becoming infected and they don’t stop the spread of the virus by those who are infected.

The data actually shows that the fully vaccinated are more likely to catch the Omicron variant than the unvaccinated.

A Harvard-led study of 68 nations and 2,947 U.S. counties revealed that higher vaccination rates actually seemed to correlate with greater infections.

The good news is the Omicron produces a mild case. There are a few symptoms and it’s over in a day or two. Most people suffering from an Omicron infection describe it as something like a cold, maybe a mild flu at worst.

Even better news is that Omicron produces antibodies that are highly effective at preventing future infections of SAR-CoV-2. In an ultimate irony, Omicron may be the vaccine we’ve been waiting for.

Most vaccines produce a mild version of the disease in order to prevent a severe or deadly version. The original smallpox vaccine consisted of a mild dose of cowpox, which produced a mild illness, but prevented the deadly smallpox.

In any case, Omicron appears to be more effective at preventing future infection than the gene modification experiments from Pfizer and Moderna. Yet that’s not the end of the story.

Back to the Bad News

Extensive evidence is now emerging that the mRNA vaccines from Pfizer, Moderna and other Big Pharma companies produce myocarditis (heart failure) in men under 40 and particularly men in the 16–25-year range.

There’s almost no reason for young men and women to take the vaccine. They’re at relatively low risk of getting COVID and even lower risk of severe results compared with older age groups.

It now appears that severe side effects including heart failure greatly outweigh any benefit of the vaccines for younger men.

We may be near the end of the pandemic, as the mild Omicron variant spreads and helps lead us to herd immunity.

But we’re likely just at the beginning of what may be decades of fatal and debilitating side effects from these gene modification treatments that were rushed into production without adequate safety trials.

Here’s an alarming but realistic possibility: Future costs imposed on the economy by over-vaccination may be even greater than the huge economic costs of the pandemic that we have suffered since 2020.

You’ve probably heard of 5G wireless communications technology. 5G providers want to install 5G on airplanes. But the Federal Aviation Administration has raised concerns that the 5G technology could interfere with the avionics on civilian and military aircraft.

The wireless providers were asked to halt work on 5G until solutions could be found to the problem of 5G interference with aircraft systems.

The particular avionics instrument that suffers from 5G wireless interference is a digital altimeter that is essential for landing safely in low visibility. In bad weather, pilots are not able to land visually and will not try to land if forced to rely on altimeters that may be suffering interference from wireless communications.

Why wasn’t this problem identified and fixed earlier?

Well, there’s nothing new about digital avionics or 5G. The fact is the problem had already been identified.

The real difficulty was that the altimeters could not be fixed in time because there’s a shortage of qualified engineers in the Wichita area to do the work. (Wichita is a center of engineering expertise in avionics for historical reasons; think of it as a kind of Silicon Valley for avionics engineers.)

The reason for the shortage in expertise is the federal contractor vax mandate imposed by Joe Biden.

Almost all of the avionics engineering firms are federal contractors because they work on military as well as civilian contracts, and they are regulated by the FAA.

These engineers, many of them men in their 40s and 50s, have a relatively low rate of vaccination, more like 50% rather than the national average of 80%. They are being fired or furloughed because of the vax mandate.

This is a dysfunctional trifecta of conflicting technologies (5G vs. avionics), bad public health policy (the vax mandate) and the personal preferences of engineers (low vax rates).

This all plays out as another supply chain breakdown because the altimeters cannot be recalibrated in time.

But the overreaction to the pandemic and defective public health policies that have resulted are not limited to the United States.

We have seen even more misguided and destructive policies in China, Australia, Austria, Germany and France. China’s response has been especially severe because it has engaged in a draconian yet unrealistic Zero COVID approach.

When a case emerges in China, they will lock down an entire city and engage in massive and intrusive track-and-trace protocols.

Recently, tens of thousands of citizens of Xi’an (a city of over 13 million population in central China) were forcibly relocated to quarantine camps outside city limits merely for living in the same building or the same part of town as an identified COVID sufferer.

This is also happening in major port facilities such as Ningbo, just south of Shanghai, which only adds to the already extensive disruption in the global supply chain. Of course, a Zero COVID policy is guaranteed to fail, which means China is destroying its own economy for no good reason.

Meanwhile, Australia has practically been under a state of siege in Melbourne and Sydney with residents arrested just for going outdoors. Austria has completely segregated the unvaccinated and banned them from public life.

This bout of insane public policy has also struck France.

French President Emmanuel Macron has vowed to attack the unvaccinated and “piss them off” until they submit to his vaccine mandate. Macron claims that the unvaccinated are the “enemies” of “democracy” and are engaged in “lies and stupidity” for refusing vaccination.

Of course, the one who is genuinely stupid is Macron. As I described above, vaccines do not prevent infection and they do not stop those infected from spreading the virus. Vaccines do nothing to stop the spread of the Omicron variant or other variants of the virus.

Again, over 80% of new infections of COVID are among the vaccinated (and boosted) according to reliable studies from Israel, South Africa, the U.S. and other jurisdictions.

This is a financial, not a political newsletter. But to deprive citizens of civil rights for not taking a vaccine that doesn’t work is the greatest civil rights violation of all. In the long run, history will set the record straight.

Figures like Macron will be seen for the idiots they are.

In the short run, expect weak global economic performance and possible recession resulting from these draconian and wrong-headed policies.