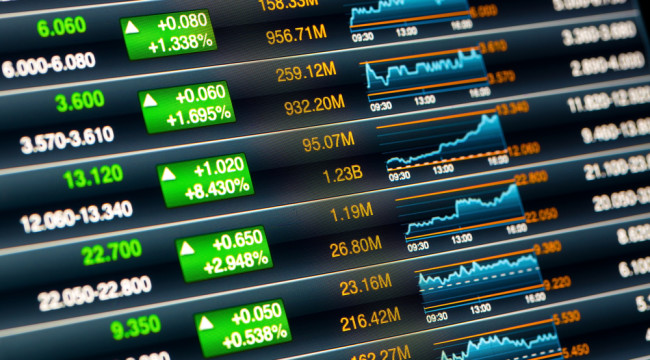 For most of the last seven years — ever since the Panic of ’08 — we’ve been living in a Bizarro World where bad news about the economy has been good news for the stock market.

We’d get lousy job numbers on the first Friday of the month, for instance, and the Dow would zoom up 200 points on the theory that the news would inspire the Federal Reserve to mash the monetary gas pedal — or at least hold off tapping the monetary brakes.

And when the Fed followed through with EZ money policies at a subsequent meeting, that would be cause for yet another stock rally.

The bad-news-is-good-news dynamic started breaking down two weeks ago. The Fed punted on its chance to tighten and raise the fed funds rate — after jawboning all year about doing so.

“What have we seen since then?” asks Dan Amoss, who heads up our Jim Rickards research unit. “We have not seen a market rally, which typically follows dovish Fed announcements. This bearish impulse is a warning that faith in the Fed’s power to push stocks higher is fading.”

And so it goes with lousy job numbers this morning. The wonks (we’re reviving the term by popular demand) at the Bureau of Labor Statistics managed to conjure only 142,000 new jobs for the month of September.

Bloomberg polled dozens of economists earlier this week asking what they thought the number would be. The average guess was 203,000. The most pessimistic was 180,000. Hell, you need 150,000 just to keep up with population growth, and we didn’t even get that.

True, one month does not a trend make… but the BLS also revised the August and July numbers down.

The “NILF” number reached a record high of 94.6 million. If you’re unfamiliar with the term (and get your mind out of the gutter!), that’s the number of Americans age 16 and older “not in the labor force.” That is, they don’t have a job and they haven’t looked for one in the last month. 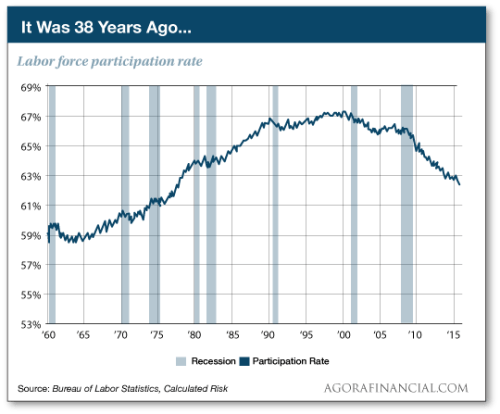 The unemployment rate remained flat at 5.1%. The real-world unemployment rate from Shadow Government Statistics — using the same methodology the BLS applied during the Carter administration — is likewise flat at 22.9%.

Econoday’s bottom line: “Forget about an October rate hike, and maybe forget about a December one too.”

Well, with Hurricane Joaquin’s projected track moving away from the East Coast now, the Fed needed a new excuse to stay put… and the BLS delivered just in time!