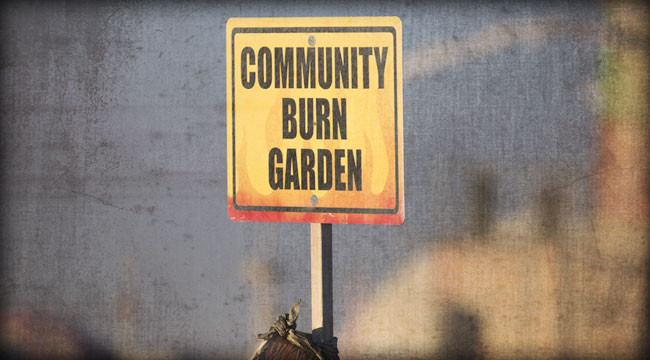 Baby Boomers Put Retirement on the Back Burner

The body count in Egypt has reached 900.

The cover of The Economist yesterday depicts an all-out street battle in the middle of Cairo. According to The Independent, this latest round of violence in the Arab Spring 2.0 rates as the bloodiest mass slaughter in Egypt’s modern history. The leader of the Muslim Brotherhood was hauled away in handcuffs by the Egyptian army this morning.

What’s going on over there?

“Demographics have been a major factor in the Islamic resurgence of the late 20th century,” we first observed in Financial Reckoning Day back in 2003. Citing Samuel Huntington’s The Clash of Civilizations, we wrote, “Population growth in the Muslim countries… and particularly the expansion of the 15-24-year-old age cohort, provides recruits for fundamentalism, terrorism, insurgency and migration… demographic growth threatens Muslim governments and non-Muslim societies.”

A decade on, demographics continue to define conflict in the Middle East. Here’s Egypt’s population by age group: 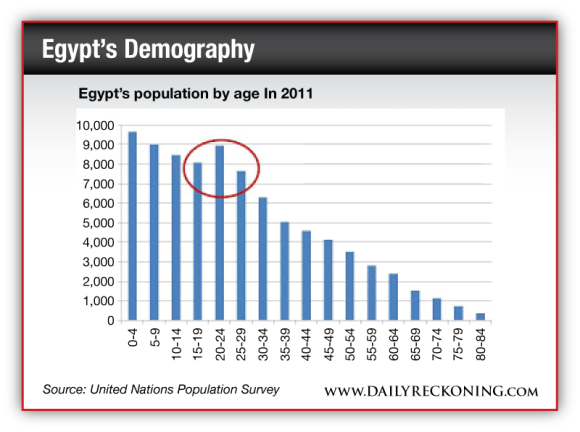 In Western history, we showed in Financial Reckoning Day, the French and Russian revolutions also corresponded with epochs during which large cohorts of young people marauded about the countryside with nothing to do.

Even here in the U.S., a restless band of baby boomers wreaked havoc in the 1960s… at least until the draft was abolished. If, as Auguste Comte suggested, “demography is destiny,” we continue to wonder today what will happen to the West when hordes of those baby boomers, now old, have nothing to do… and no savings?

According to the Employee Benefit Research Institute, near-retirement households have only $12,000 saved. As we lay out the numbers below… outliving your savings will prove a sure way to tarnish your “golden years.”

Good thing we have our safety nets — Social Security, Medicare, Medicaid — you say. But according to Michael Tanner at the Cato Institute, Social Security’s unfunded liabilities top $15.8 trillion, or 101% of today’s GDP. And Medicare could owe a mind-blowing $100 trillion, or 641% of current GDP.

We’ll see how that pans out… er, you might want to start planning for the worst. The personal savings rate is still 4.5%. And those who do save have been derailed by the Fed’s zero interest rate policy. If the Fed starts to taper quantitative easing… it will try to raise long-term rates, which won’t help the rate you get on your CDs or savings account.

Add that to the greatly eroded wages of current workers over the past five years alone. And fewer workers are saving a smaller percentage of a smaller paycheck that doesn’t go as far. 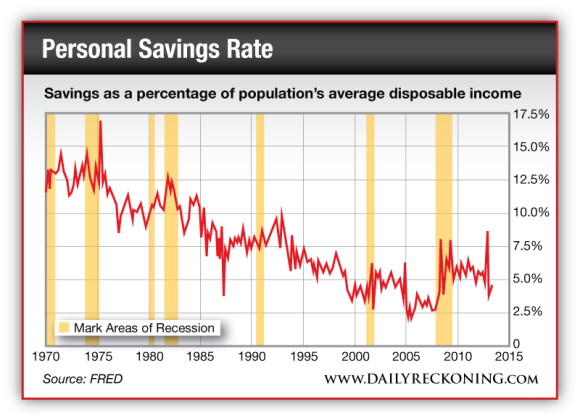 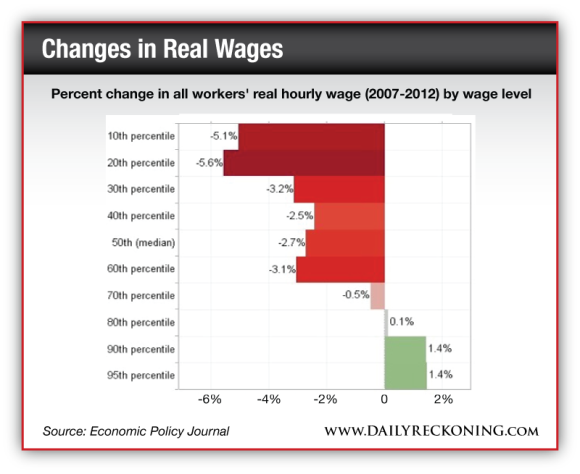 Not only do the safety net programs currently have liabilities in the trillions that they can’t pay for… but the workers who pay taxes to fund the programs don’t have any money either. The second quarter’s earnings numbers showed financials outperformed every other industry (once again). MasterCard’s earnings went up 19%, and Visa’s earnings grew 21%.

The credit card companies are having a field day. Other businesses, not so much. If you strip out the financials, earnings fell 3% in the second quarter. Big retailers like Macy’s, Dick’s Sporting Goods and even Cisco missed earnings and are trimming back their outlooks. In Cisco’s case, 4,000 workers will get the heave-ho.

So where’s all that credit card spending going? Who knows… not on luxury items or extra services. More likely food and gas. If it’s as we suspect, retirement planning is on the back burner.

Worse yet, as we covered in detail in this month’s issue of Addison Wiggin’s Apogee Advisory, even much larger nest eggs aren’t all they’re cracked… well, you know. “A million dollars isn’t what it used to be,” The New York Times pointed out in June, harking back to the 1953 movie How to Marry a Millionaire. “By the Fed’s own numbers, you’d need $8.7 million today to have the same purchasing power as 60 years ago.”

Ed. Note: There are ways to change your retirement outlook. Readers of The Daily Reckoning email edition get regular opportunities to discover actionable advice on how specifically to protect and grow their wealth for generations. If you’re not receiving The Daily Reckoning email edition, you’re not getting the full story. Click here now to sign up for free.