Is it time once again to cast your bread upon the waters… and buy?

Today we rise above the daily hurly-burly of the market… take the long view… and ransack the past for clues about the future.

The major averages were negative for 2018. And the stock market has just emerged from its bleakest December since 1931.

But the market has found a toehold, bleats the consensus. The way ahead is higher. It is time to hunt bargains.

There is doubtless justice here — in specific cases and in the short run at least.

But are stocks cheap overall? And what can you expect for the next 10 years?

If stocks are cheap today, you can expect — generally, again — lovely returns for the following decade.

The reverse obtains if stocks are expensive today.

So once again: Are stocks presently cheap? Is it time to buy?

That is, the ratio of total market cap to U.S. GNP (which approximates but does not equal GDP).

If the total valuation of the stock market is less than GNP, stocks are cheap.

If it is greater than GNP… stocks are dear.

Mr. Buffett claims this formula is “probably the best single measure of where valuations stand at any given moment.”

Any ratio below 50% means stocks are “significantly undervalued.”

Not coincidentally, 1982 marked the onset of the lengthiest bull market of all time.

The dot-com catastrophe was close behind.

That is, despite the worst December since 1931… by this measure stocks remain “significantly overvalued.” 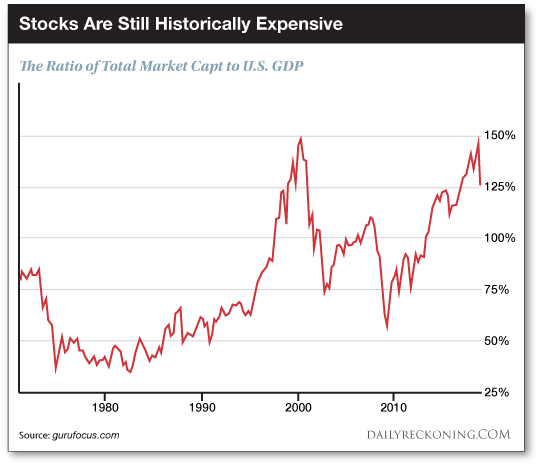 What does that 127.5% imply for the stock market over the next decade, based on the historical record?

Negative 0.5% returns per year, including dividends.

You can expect negative returns for the next decade — if you take this TMC/GNP ratio as your guide.

Is it an infallible prophet?

It is not. None exists this side of eternity.

But financial journalist Mark Hulbert tracks eight market indicators he deems most credible. And he ranks it among the better of them.

But could negative 0.5% returns per year for the next decade — including dividends — actually be optimistic?

Mr. Hussman is what is known as a “perma-bear.”

He also forecast in March 2000 that the S&P would post negative returns the following decade. It did.

And what does Hussman’s crystalline sphere reveal for the decade ahead?

Assume you bought the S&P in 1999. You have held ever since — over hill, over dale, through every peak, every valley.

What has been your average yearly gain since 1999?

But boring old gold would have yielded you a superior return since 1999… incidentally.

But to return to the question at hand…

What can you expect for the next 10 years based on current stock market valuations?

At the March 2000 bubble peak, an understanding of market history… enabled my seemingly preposterous but accurate estimate that large-cap technology stocks faced potential losses of approximately 83% over the completion of the market cycle…

At the 2007 market peak, by contrast, stocks were generally overvalued enough to indicate prospective losses of about 55%…

And this market cycle?

Take this vision with a heaping spoon of table salt… as you should with any forecast.

And the further out the reading the heavier the dose.

But if a hangover exists in direct proportion to the binge that caused it… investors may be laid up for the next decade.